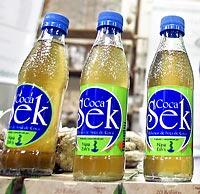 Coca Sek's makers say tests have shown traces of cocaine and other alkaloids in the beverage made of raw coca-leaf extract. (JAVIER GALEANO / AP)
By SERGIO DE LEON
The Associated Press

BOGOTÁ, Colombia — A new soft drink made in Colombia may not be cola, but it's definitely coca.

A Nasa Indian company in southern Colombia has created a golden, carbonated drink made from coca-leaf extract, and makers plan to market it as an alternative to Coca-Cola.

Coca Sek goes on sale this week in parts of Colombia, but its makers say they probably won't be able to export to the United States or most other countries because of rules blocking the entry of raw coca, the plant from which cocaine is refined.

"Six years ago we took on the job of trying to re-establish the good name of the coca leaf, which is a plant with enormous medicinal properties," said David Curtidor, a Nasa who heads the community company that produces the drink in the tiny southwestern town of Calderas.

The soda looks like apple cider, has a tealike fragrance and tastes vaguely like a cross between 7UP and ginger ale. The physical effect of drinking it — even after several bottles — is minimal.

"It's an energizing drink," Curtidor said. "It's like coffee since it is lightly stimulating."

Curtidor said the drink also is a political statement against transnational companies such as Coca-Cola, which "symbolizes imperialist domination."

Coca-Cola spokeswoman Kirsten Watt, in Atlanta, said such competitors are welcome. "They're entitled to create beverages as they see fit," she said.

As for its own ingredients, Coca-Cola is tight-lipped. "Cocaine has never been an ingredient," Watt said, though she declined to say whether cocaine-free coca extract is part of the drink's secret recipe, as has been widely reported. "We just can't talk about the ingredients, the specific flavor composition."

The company, which has 12 to 15 employees at a small bottling plant, does not have the money needed to carry out tests to pinpoint how much naturally occurring cocaine alkaloid is in the drink, Curtidor said. But the company has done tests showing all alkaloids — which include cocaine and other substances — make up less than one-half of 1 percent of the drink.

"The traces that can remain are minimal because the formula we have is one with a very low level of cocaine," he said.

A group of Nasa Indians started selling coca tea, which is common in the Andes, to Colombian supermarkets several years ago. A year and a half ago, the group began experimenting by adding ingredients and cooling the drink, Curtidor said. Group members decided to call it Coca Sek, which in their language means "Coca of the Sun."

Similar drinks have appeared in Peru using a formula based on coca leaves. But such products are banned in most nations outside the Andean region.

Colombia is the world's No. 1 producer of cocaine, and the United States is the top buyer. But the coca leaf has many other uses. For centuries, Indians in the region have chewed the plant's leaves to ward off hunger and fatigue. Some Nasa Indians are trying out the leaf in wines, cookies, even soaps.

The clear bottles with blue plastic caps went on display at a crafts fair in Bogotá this month. The drink is scheduled to hit supermarkets starting Friday in the southern Colombian states of Cauca and Valle, and Curtidor said he hopes to roll it out nationwide.

The soft drink's makers said it has been sampled by many Colombians and has won wide approval. "We have a very big market," Curtidor said.

For now, Coca Sek remains a local product. "One of the first goals we have is to obtain a distribution truck," he said.