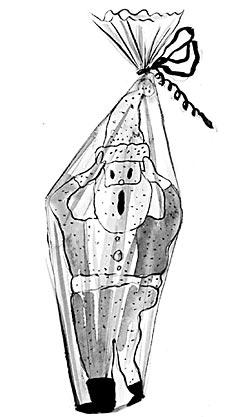 (ILLUSTRATED BY SUSAN JOUFLAS / THE SEATTLE TIMES)
By Shelly Mazzanoble

FIVE FLOURED fingers, four Furby knockoffs, three years of financing, too many toddies and one very good intention. 'Twas the season to ingest so much egg, butter and brown sugar that if I stood too close to the heater someone was liable to dunk my arm in milk and gnaw it off. It was Christmastime, the one time of year I get in touch with my inner Sara Lee.

Let's be clear. Owning a spatula doesn't make me a Keebler elf, but I can make anything with a recipe, so long as the ingredients aren't too intimidating. Eggs — check. Vanilla — check. Cream of tartar — well, maybe no. It's not even cream.

I'd found the recipe while trolling one of those zillion food Web sites on the Internet. This particular recipe had come from a woman we'll call Pat. She wasn't famous but, thanks to the World Wide Web, her sugar cookies were. "These cookies are the first recipe my daughter ever asked for!" I read.

So I put my trust in this unknown woman, and because of that she almost ruined Christmas.

Pat's "famous" sugar cookies involved all recognizable ingredients. And I had so much faith in her that I told my mom not to make her famous sugar cookies.

"You stick to your little rum balls and pistachio cakes," I said with confidence. "I got it covered."

She hesitated. In our family, sugar cookies are everyone's favorite. They're coveted like the last loaf of bread in a poor village. If we didn't have sugar cookies, we might as well not have a Christmas tree, red and green M&Ms, a shot of whiskey before midnight Mass. But if Pat's cookies were good enough for her daughter, they had to be good enough for us.

I woke up early on baking day — a Christmas miracle unto itself — and laid out the cookie cutouts I bought last January for 75 percent off. The freshly printed recipe was propped on my new, overpriced recipe holder. A piece of tape and a cabinet door would have sufficed, but my foray into baking stardom deserved so much more. I rolled my sleeves once, twice, a third time before changing into short sleeves. Then I got started.

In a large bowl I creamed, blended, whipped and folded the ingredients into a lump of dough the size of a bowling ball. I fantasized about these cookies enjoyed by firelight, with generations of Pat's family wearing matching snowflake sweaters while hanging fresh-cut garland. Tradition literally clung to my fingertips in little dough pellets. I threw half a box of Splenda on the dough ball before wrapping it up, just in case. The only thing left for the dough and I to do was chill.

I used the downtime to reflect on my culinary prowess. I tore off a hunk of dough and shoved it in my mouth. I roared. Ben & Jerry's will want my dough in their latest ice-cream flavor. I belong on the Food Network! The dough glowed in the refrigerator like the little star of Bethlehem. I anticipated the outcome like an 8-year-old on Christmas Eve, waiting for Barbie's Dream House to drop down the chimney.

Refrigeration completed, I placed the dough ball on a lightly floured sheet of wax paper like it was the baby Jesus being laid in the manger. The cookie cutters were spread out like instruments in a cockpit. My dough quickly surpassed the Versace jeans I scored at Loehmann's as my most prized possession.

I rolled the dough 'til it was an eighth of an inch thick. I cut it into Christmas trees, Santas with sacks, stockings that clung to the rolling pin with care. I added another handful of flour. I gathered scraps of dough, formed more dough, rolled more dough. Placed dough gently on cookie sheets. Two batches came out of the oven, two went in. Two more in, two out. My wrist was getting tired, but I had to persevere. I thought of Santa's elves, hammering and fastening and getting high off glue. Would they have kicked off their pointy little shoes and taken a nap? No!

But there was so much dough. Every time I ripped off a hunk it grew back like a lizard tail. I started eyeballing the thickness, figuring a thicker cookie means more cookie, which is never a bad thing. But I could barely keep up with the cookie contractions seven minutes apart. I had developed carpel-tunnel and hadn't started decorating yet. I noticed, too, that in the heat of baking, my Santas had sagged, deforming into something slightly disturbing.

I realized my mood was souring and decided that tasting the fruits of my labor might refuel me. I singled out a Santa. My taste buds buzzed in anticipation. I closed my eyes. I bit. I chewed.

These weren't sugar cookies. They were index cards! I tried to spit them out but they'd cast a mold around my teeth. As I thought of choking to death, my life flashed before me, and it became clear that unless she was looking for an organic method to hang wallpaper, Pat's daughter had a lot of enemies. She'd use these cookies to exact revenge on everyone who'd ever wronged her — the dry cleaner who shrunk her favorite sweater, the co-worker who brown-nosed her out of a promotion, the kitten-loving lawyer who never called after a really great first date. . .

So there it was. I had a skull-sized ball of dough and 70-some misshapen cookies that tasted like a second-grader's art project. No amount of colored cellophane and curling ribbon would help pass off those cookies as edible. Perhaps with a little ceramic paint I could turn them into coasters and give them away.

But there was one thing I wouldn't be able to salvage. I have a family who lacks faith I can make my bed, let alone their favorite piece of the holiday season.

Still, there was no choice. The dough landed in the trash can with a thump as loud as reindeers landing on the roof.

I had remembered to renew my Costco membership, hadn't I?

I wanted to believe my mom would be surprised by Pat's betrayal, but when I showed up bearing 200 cookies wrapped in cellophane and curling ribbon she smiled and said, "Aw, honey, you tried." Piles of homemade sugar cookies stood shimmering in her spotless kitchen.

"Mothers," she said, "know everything."

Shelly Mazzanoble is a playwright and author whose short stories and embarrassing personal essays have appeared in Whetstone and Skirt! She lives in Seattle and remains cynical about trusting strangers on the Internet. Susan Jouflas is The Seattle Times' assistant art director, features.