By Matthew Amster-Burton
Special to The Seattle Times

Some restaurant menus are hermits, never straying from a specific region of one country. The menu at Black Bottle, in Belltown, is a gonzo adventure traveler: It cavorts all over the globe and encounters its share of triumphs and disasters.

"Is this place Indian-inspired?" asked my friend, zeroing in on the curried broccoli and cauliflower. Then she noticed dishes with nods to France, Japan, Thailand, Italy and the United Kingdom.

Housed in a handsome century-old brick building (the former Two Dagos), the Black Bottle tavern is bustling and sometimes jet-engine loud, the dim light punctuated by glittering people. But this isn't just a place to be seen: There's a strong focus on food and wine, with mixed results.

Order a bottle of wine, and your waiter will slide open a heavy door and give you a peek at the wine cellar. It's an impressive collection, notable for its wide-ranging picks and shockingly low markup. No bottle is more than $40. There are several dozen wines on the list, from Portugal, South Africa and Argentina as well as the usual suspects. We tried the Val da Clara from the Douro region of Portugal ($24) and were rewarded with a smoky and complex red.

Black Bottle also makes strong and well-balanced cocktails, although their signature drinks (raspberry mojito, $7.50, and house margarita, $6) are nothing groundbreaking.

The restaurant has a novel approach to dinner prices, which are also delightfully low. Every plate is $8 and every dessert $7. They are carefully designed for sharing by chef Brian Durbin (who came to Seattle after cooking at an "eco-lodge" in the Caribbean).

Black Bottle does great things with East Asian flavors. I don't think I've ever ordered laab gai (minced chicken salad) outside a Thai restaurant, but Black Bottle turns out a fiery and faithful rendition, complete with lettuce leaves for rolling. Fresh sardines namban is a Japanese way of treating these most fishy of fish: The fillets are lightly fried and then sauced with vinegar, soy sauce, and slivers of onion and hot and sweet peppers. The tangy sauce cuts right through the oiliness of the fish. If you like sardines, order two plates and keep one close.

Service is quirky. For the most part, it was friendly and efficient. But one Sunday night, we waited 15 minutes for beers to arrive, then the waiter disappeared without taking our food order for another five minutes. When we asked for recommendations, he advised us that if we like mussels, we should order mussels, and if we like steak, the steak is great.

The mussels, in a Mediterranean-flavored broth with toasted pita triangles for dipping, were on the fishy side. But the broth was unaffected, and we asked for extra bread to sop it up. The hanger steak, served Japanese-style with grated daikon and shiso leaf, was nicely cooked and sauced but didn't quite come together with its garnishes.

One of the most, well, interesting items on the menu is a crime scene of a dish called Broccoli Blasted. Take a bunch of broccoli florets and place them in a red-hot oven until the flower buds are burned to charcoal and the stem sides are still raw. Then throw on a handful of salt and serve. I envy the person who got "blasted" enough to think this was tasty.

Other vegetables fare a little better. Curried cauliflower and potatoes were dry and undercooked, but at least no part of them was singed.

Much better is BB's Antipasti Misti, which features basil-wrapped mozzarella, fried Reggianito-cheese-stuffed olives and prosciutto-wrapped figs, all of them the kind of clever, full-flavored bar food that Black Bottle is going for.

For dessert, go directly to the chocolate cake and vanilla gelato: a towering round of rich and moist cake with the gelato somehow coaxed inside it. None of the other desserts were half as exciting: flavorless tiramisu, undercooked bananas foster and overly stiff coconut panna cotta.

One night, I sat alone at the bar and ordered the cumin pork tenderloin, the prosciutto-bechamel flatbread and a glass of Cooper Mountain pinot noir from Oregon ($7). One plate isn't enough for a solo meal, but it's perfect for a hearty snack.

The pork tenderloin was cooked rosy in the middle, as it should be, and served with a lightly dressed frisee salad. The flatbread is crisp focaccia, baked in a rectangular tart pan with slivers of prosciutto on top. (Another version, with smoked chicken and dried cherries, was overly cheesy and less successful.)

At one point the woman next to me was deciding on a glass of wine. "Should I get the meritage or the pinot noir?" she asked the bartender.

"Well, what do you think of the pinot?" the bartender asked me. I said it was great, and the woman ordered a glass. It was a convivial moment — right up until she started proclaiming her love for Broccoli Blasted. 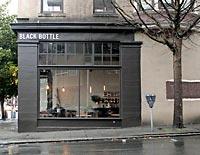 The bustling Black Bottle in Belltown has a menu that flirts with globe- trotting cuisine. All small plates are $8 and all desserts are $7. (BETTY UDESEN / THE SEATTLE TIMES)
Black Bottle

Wine list: A short but wide-ranging and frequently updated list with an impressively low markup. Many wines are available by the glass, even when the menu doesn't say so. Whites $15-$28, reds $15-$38.

Parking: street, or there's an $8 lot next door.

Who should go: Anyone interested in exploring new wines at reasonable prices and navigating an eclectic but erratic menu.