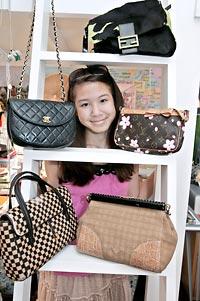 15-year-old Samantha Sussman displays her collection of designer handbags. The 10th-grader asked her aunt to pick up a $900 Chloe Paddington purse on a trip to Paris. (DIANE BONDAREFF / BLOOMBERG NEWS)
By Cotton Timberlake and Lisa Kassenaar
Bloomberg News

When Sydney Ramsden complained she didn't have a purse for her 13th birthday dinner at Manhattan's 21 Club last year, her mother bought her a black nylon bag — a $230 Prada "pochette."

"It went perfectly with my outfit," says Sydney, an eighth-grader at a private, Upper East Side girls' school who has since added a pink Prada pocketbook to her accessory wardrobe. For Christmas, she wants Louis Vuitton.

Teenagers are the new kids on the block for the luxury stores on Madison and Fifth avenues, where retailers pay the world's highest rents. Fueled by mom's and dad's credit cards, girls are snapping up $1,500 bags and $480 cashmere track suits, helping drive record sales for brands such as Prada and Louis Vuitton.

The young customers include daughters of Wall Street bankers and lawyers, set to splurge into 2006 as their parents collect more than $17.5 billion in year-end bonuses from firms such as Merrill Lynch and Goldman Sachs.

For Sydney's birthday, Susan and Dan Ramsden also bought a $250 Juicy Couture argyle sweater and a $295 chunky silver necklace from Tiffany. Accessories for their daughter, who wears a uniform to school, run about $1,500 a year, says Susan Ramsden, 41.

Dan Ramsden, 40, is a managing director at Near Earth, which does investment banking. Susan Ramsden is a former buyer for AnnTaylor Stores, whose own favorite brands are Prada and Tod's, an Italian maker of bags and loafers.

"It doesn't matter that they are only 16, 18 or 23," says Patricia Edwards of Wentworth, Hauser & Violich, an investment firm in Seattle. "They think they should be able to have a good life."

Some girls are so eager for French and Italian goods that they call Europe to beat U.S. waiting lists. Samantha Sussman, 15, acquired her $900 Chloe Paddington purse by asking her aunt to pick it up on a trip to Paris.

A 10th-grader at an Upper East Side girls' school, Sussman has a Vuitton bag she received from her grandmother for her junior-high graduation and a quilted Chanel handbag, a hand-me-down from her mother.

Juicy Couture, a unit of Liz Claiborne that sells a "socialite" pink cashmere tracksuit, has added $900 purses styled for customers as young as 18. Juicy-clad Barbie dolls also are available, at about $100 for a set of two.

At Coach, the largest U.S. seller of luxury leather goods, the average bag costs $250, with 18- to 24-year-olds accounting for about 10 percent of sales, spokeswoman Andrea Resnick says. "It used to be that the mother was carrying the high-end bag," says Rebecca Resnick, senior accessories editor at Teen Vogue in Manhattan. "Now, the mothers and the daughters are carrying them."

Manhattan teens are also taking cues from celebrities such as the 19-year-old Olsen twins, Mary-Kate and Ashley, who moved to the city last year to attend New York University. Mary-Kate's style — dubbed "dumpster chic" for its baggy pants, oversized sweaters and vintage items from secondhand stores — includes a cup of coffee and a $1,500 bag from Balenciaga.

Along with Balenciaga, adolescents are hot for goods bearing the names of Milan-based Armani and Gucci, according to a "brand-love index" compiled by Harrison Group, a Connecticut market research firm.

The two fashion labels joined Microsoft, Apple Computer and Abercrombie & Fitch to round out the five brands with the biggest increases in popularity from 2003, the firm said after an October poll of 500 people age 13 to 24.

"Materialism is way up this year," says Jim Taylor, a Harrison Group vice chairman. Fewer respondents than two years ago answered, "I want to make the world a better place for everyone," he says.

Emily Weiss, an NYU student who grew up in Wilton, Conn., researched her recent purchase of a $1,000 blue, soft leather Balenciaga for months and grabbed it three days after the fringed bag arrived at the company's 22nd Street store.

"I'm very particular about accessories," says the 20-year-old, who says her mother and father paid the bill. She became serious about purses in the ninth grade with a $300 Louis Vuitton shoulder bag and later carried a duffel-like Vuitton and an Yves St. Laurent carryall, she says.

"I buy one splurge bag a year," says Weiss, a studio-art major who lives in an apartment on the Lower East Side. "That's how much you can ask your parents for before they think you're insane."

With reporting by Andria Cheng in New York.