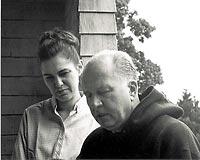 The first few minutes of Seattle filmmaker Jean Walkinshaw's "I Remember Theodore Roethke" feature some archival footage of the Pulitzer Prize-winning poet crossing Puget Sound on a ferry. He's wearing a hooded sweatshirt, smoking a cigarette and looking a little curmudgeonly as he gazes off at all that serenity.

It takes a moment to realize that he's standing not on the passenger deck but on the roof of the ferry, up by the smokestacks, without a guard-rail, eyeing the Sound as though its chilly gray waterworld might well entice him to its depths.

That perilous perch seems appropriate for a poet who in his own words was intent on "really driving myself, seeing whether you could derange the senses."

Walkinshaw's half-hour documentary airs as part of the KCTS series "About Us," at 9 tonight and 1 p.m. Nov. 27. In it, you get a rounded glimpse of Roethke (1908-1963) whose last years were spent in Seattle, where he taught at the University of Washington. Former students, including writers David Wagoner and Tess Gallagher, talk about his influence. Roethke's widow, Beatrice Roethke Lushington, talks of both the good times and the bad (Roethke was bipolar and subject to mental breakdowns).

"His depression didn't bother me," his widow remarks with an unexpected smile. "In fact one day he said, 'You'll be happy to hear I was mildly depressed today.' But his manic phases were very upsetting."

There's a break in her voice that lets you know just how upsetting they were.

Along with testimony from those who knew him, the documentary features extensive film footage of Roethke (two earlier films, "Three Artists in the Northwest" and "In a Dark Time," are credited). We see him reading from his work in high declamatory style, with accompanying arm gestures. And we see the Puget Sound landscapes and water vistas that inspired him, courtesy of footage shot by Walkinshaw's photographer-editor Rich McAdams.

McAdams gets it especially right in the images accompanying an excerpt from "The Rose," a poem triggered in part by Roethke's visits to the San Juan Islands, his widow says. The late Northwest composer Alan Hovhaness ("Mysterious Mountain") furnishes a spare piano-dominated score, and some still photographs of Roethke include shots by Imogen Cunningham and Mary Randlett, making this a very Northwest affair.

Walkinshaw lets Roethke speak for himself on his "mystical" bent, in terms and a tone of voice closer to a longshoreman's than an ivory-tower poet's. Roethke is also memorably vivid on his "visceral and manic" style of teaching.

As for the role Seattle played in his career, Wagoner suggests that Roethke "absorbed an awful lot from the wildness around Seattle simply by sitting in it, or walking a short way in it, and becoming a part of it." Certainly his lines about "sun-parched, wind-warped madronas" and waterways where "the sea rearranges itself among small islands" capture the essence of our surroundings.

If there's one key piece of information missing here, it's of where Roethke and his wife lived in Seattle. It would help to get a sense of their neighborhood — or neighborhoods — in a city of such varied geographical character, especially given the poet's sensitivity to landscape.