This James Bond attache, modeled after the one in "From Russia With Love," is among the most sought-after 007 collectible toys. (MARK HARRISON / THE SEATTLE TIMES)
By Mark Rahner
Seattle Times staff reporter

I have gathered the intelligence and assessed the Bond situation in depth. My recommendation:

Kill him off. With extreme prejudice.

Given 007's current ubiquity, this action may seem counterintuitive. In particular, "Layer Cake" star Daniel Craig has just been named as the latest actor to portray Bond, in "Casino Royale," due in theaters next November. And the new "From Russia With Love" video game was a blockbuster even before it hit store shelves this month.

Bond hasn't become a Scooter Libby-caliber security problem, but he's definitely become an embarrassment. Purists might argue that the franchise has declined steadily since 1967's "You Only Live Twice." But even less critical fans wouldn't have to be tortured to admit that by the time they saw Pierce Brosnan as Bond para-surfing in 2002's groan-out-loud "Die Another Day," he'd jumped the shark for good.

The movies had become meaningless copies of copies, empty vehicles for a guy in a suit ordering shaken-not-stirred martinis, firing off excruciating quips after stunts that seemed more rote even as they grew more outrageous.

The spy was relevant and even daring in the Cold War when Ian Fleming released the sado-masochistic 1953 debut, "Casino Royale." But the Austin Powers spoofs positioned the stake, and Matt Damon's grittier "Bourne" espionage thrillers pounded it home.

Among the intelligence assets I have cultivated for this report: Chase Brandon, the CIA's film-industry liaison. (Note to Robert Novak: His identity really is public knowledge, so this isn't a leak.) In a 2003 interview, Brandon, who had been consulting for ABC's "Alias" spy series, told me that the only kind of James Bond that would make sense in today's world would be ... a computer geek. Thrilling: "I'd like that Hot Pocket microwaved, not baked."

"It can only parody itself," says Seattle-based intel asset David Deal, co-author of "The Eurospy Guide," a guide to the roughly 300 knockoff flicks inspired largely by Bondmania.

The early films in the series were a unique capsule of time, and it will never be like that again, says Deal. Spy films were winding down as early as 1967 or 1968. But, he says, "Bond has become his own thing. It's almost not a spy film anymore.

"It's kind of interesting to see how a Bond film can never be a Bond film anymore. You can't be derogatory toward women. You can't drink as much. You can kill, obviously. But he can't be this politically incorrect being that he was back in the '60s, as he was envisioned by Ian Fleming."

Screenwriters Neal Purvis and Robert Wade have promised to update "Casino" to reflect today's terrorism environment, according to the unofficial Bond news site, www.mi6.co.uk, since the fall of the Soviet Union has neutralized the book's SMERSH (aka "Death to Spies") organization. But Purvis and Wade were also responsible for "Die Another Day."

Likewise, director Martin Campbell has promised that the 21st Bond flick will be a stripped-down re-start of the franchise like "Batman Begins," with more "Bourne"-like grit and less gadgets. But try suffering through the triteness of Campbell's current film, "The Legend of Zorro" (only 23 percent of critics could tolerate it according to www.rottentomatoes.com).

Strap on a jetpack

EA's "From Russia With Love" game offers the most satisfaction likely in the foreseeable future. And it does so with the one strategy that could have saved the films: putting Bond back in the Cold War where he belongs.

The game is based on the second — and what many consider the best — film in the series from 1963, which in turn came from Fleming's fifth novel. Both were watersheds in Bond's movement toward world domination. Fleming had grown weary and wanted to end it with a poisoned kick from Rosa Klebb, but President Kennedy called the film one of his favorites and the public followed. "From Russia With Love" was the true start of Bondmania, with the formula firing on all cylinders after "Dr. No."

The game puts you, as Bond, into scenarios from the movie — including the Gypsy camp and the Orient Express — and a few new ones. The main draw is Connery, the biggest star yet to lend his voice to a game.

"Pardon me, do you have a match?" he asks a contact in one famous exchange. "I use a lighter." "Better still," Bond replies. "Until they go wrong," says the contact. While it's a kick to hear Connery, it's also odd to hear a 75-year-old's voice coming from a young character.

The game doesn't stick strictly to the movie. For some reason, SMERSH has been changed to "Octopus." And one of the best fight scenes in film history — the brutal one between Bond and assassin Red Grant in the close quarters of train compartments — is replaced by a firefight between Bond and Grant from across railroad tracks.

You fight enemies with the jet pack from "Thunderball," a laser watch, a rappelling belt, a remote-control Q-copter and other gadgets. And while I had trouble using them all to knock off Grant, the game's weakness is that it's too easy. Its "Bond Focus" makes it so that you don't have to aim at enemies. Get close to one, and the system tells you which button to press to take him down with a throw. It's even easier in the jetpack: Just hold down the focus button and fire at anything that lights up in the distance.

Movies vs. the books

Going back in time makes sense, though. The first half-dozen Bond movies — including the unfairly maligned "On Her Majesty's Secret Service" — are among the greatest adventures ever filmed. But anyone familiar with the source material also knows that they're a litany of missed opportunities. For instance, they're filmed out of sequence with the books and have almost no continuity from one to the next. Bond's friend and frequent partner, American agent Felix Leiter, is barely seen.

As background for this report, I read all 14 of Fleming's Bond books, but none of the subsequent ones by John Gardner, Raymond Benson or Kingsley Amis. This spring, Charlie Higson released "SilverFin," the first in a "Young Bond" series; I found it unpalatable and liquidated my copy.

Fleming never describes Bond or his past in great detail. The most that's ever revealed about his life is in an obituary that his boss, "M," writes for him at the conclusion of "You Only Live Twice." Scottish dad, Swiss mom, both killed in a climbing accident when he was 11; raised by an aunt then matriculated and thrown out of Eton for getting into trouble with a maid. Lied about his age to join the Royal Navy Volunteer Reserve in World War II, where he served under "M."

Here are a some other ways the literary Bond differs from the celluloid one:

• The novels are devoid of humor, and Bond never makes quips after killing bad guys.

• Bond isn't a cold-blooded killer. In Fleming's final (and unfinished) novel, "The Man With the Golden Gun," he skips a chance to put a bullet in the back of villain Scaramanga's head for that reason, knowing he'll suffer for it later.

• There are few gadgets. Bond is tough and resourceful — which still doesn't prevent him from being horribly tortured or beaten in nearly every adventure. He dispatches Goldfinger and arch-nemesis Blofeld by going berserk and choking them with his bare hands.

• Bond is a womanizer but does grow attached, unlike his pathological satyr film depiction.

• As described in the third novel, "Moonraker," he's a 37-year-old civil servant who gets about three missions a year suited to his talents, and spends the rest of his time slogging it out at the office.

• He has a housekeeper in his flat, who eventually grows suspicious about his assorted injuries.

• He drives a Bentley, not an Aston Martin.

• Both Fleming and Bond said they'd rather live their lives than prolong them. So why not admit he's run his course and euthanize him before even more indignities ensue?

The filmmakers found themselves "in a cul de sac," says asset James Page, editor of the UK-based MI6 site. Operational since 1998, it's the most-visited unofficial James Bond site, publishing off-the-record info from production-company insiders, licensees and other people connected to the series. (Eon Films is more secretive than SPECTRE; the official one is www.jamesbond.com.)

"They decided to go in a certain style with the last movie, but couldn't go on from there. It was a dead end," Page says. "After the first hour, 'Die Another Day' went downhill fast with most of the fans, and landed in CGI sci-fi territory they or the producers don't want to return to again in a hurry."

So why not die today?

It'll never happen, because the property is "such a money machine," Page says. It's the longest-running franchise in movie history, and it's estimated that one in every three people in the world has seen a Bond flick.

Talk about "Diamonds Are Forever": "Most of their money is generated by the merchandise these days. In a year a Bond movie's released, there will be $1 billion in merchandise, which outshines $400 million at the box office."

In other words, greed wins. Bond, who despised ostentatious displays of wealth, would be nauseated. 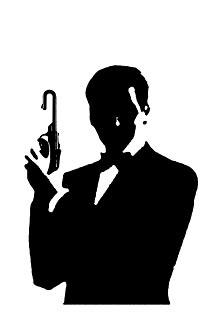