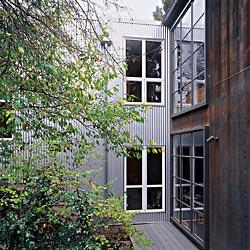 Middleton's addition, which includes a bathroom, laundry, bedroom, garage and indoor stairs, meets the original structure with galvanized corrugated metal panels. Before the addition, the only steps to the upstairs were outside. Nelson Lumber Construction served as contractor on the project. (BENJAMIN BENSCHNEIDER / THE SEATTLE TIMES)
By Rebecca Teagarden

NOTHING ORDINARY about Breta Malcolm. She's wearing a long apron smeared with blues, whites, greens and oranges when she ratchets open the door to her weather-stained La Conner home. And there it is behind her — the extraordinary: a magnificent 9-foot-tall Guy Anderson painting of Icarus tumbling.

The piece fills the wall, looking like it was created just for that spot.

It very well may have been.

This tiny house with the big art originally belonged to the painter who has been called "the Picasso of the Northwest." He built the house and created in it. Malcolm bought it from his estate in 2000, and in 2004 added a master suite and garage. She calls it "that big piece of sculpture that I'm living in." His paint still pocks the studio floor upstairs. She felt destined to live here.

"The place just had a feeling about it, a magical, wonderful feeling, and I've felt like that ever since I've lived here," she says, sighing.

"Guy Anderson had been friends with (noted Seattle architect) Roland Terry for years, and he drew it up on a bar nap. The place just screams Roland Terry."

Anderson didn't need much, and he didn't have it in the tiny studio/home with only exterior stairs to the second floor. "I'm told he used a plunger and bucket to wash his three shirts," Malcolm says.

She lived near Volunteer Park in Seattle for 30 years, raising her two daughters. Now this house is for her. Malcolm previously worked for glass artist Dale Chihuly at his publishing company, Portland Press. In her new life, she sells real estate out of Anacortes and serves as a docent at the Pilchuck Glass School and the Museum of Northwest Art in La Conner.

She is a painter also, but finds "I'm much better off doing art as an avocation." When she moved to Anderson's place she thought she would paint more, but succumbed to the laissez fair La Conner life: "I spent all my time clipping back blackberries and fooling around."

A collector of art and whatever else strikes her fancy, Malcolm has made her surroundings a feast of form and fun from the floor up, like a rummage through the attic of an art museum. The original artist's quarters — 500 square feet on each of the two floors — are crammed with paintings, sculptures, shells from the beach, stones, stuffed animals, dried flowers and various other whatnots. Upside-down planters pose as table ends; suitcases are jam-packed with Chihuly glass.

The addition gives her 540 square feet more living space. It also gives her a bright, airy master suite with birch ply walls, a deck and garage.

"Wherever there was a choice, Breta opted for the beautiful choice," Anacortes architect Brooks Middleton says. His biggest challenge was working around a commanding outcropping of bedrock. The thing just could not be ignored. So the upstairs deck wraps around the rock, and it serves as the imposing back wall of the garage.

Middleton makes it clear that this was no remodel. Anderson's place stands the way Malcolm found it. The addition is her legacy. In the end, Malcolm suffered from what she calls "architectural intimidation."

"I couldn't move anything in here because I thought, 'My stuff isn't good enough.' Then I thought, 'This is my stuff; get over it.'"

She did, and bought herself a serigraph to celebrate — Morris Graves' "Time of Change."

"I feel way lucky," she says, taking in the old and new, funky and functional. "I raised my daughters telling them, 'The only thing is, don't be ordinary. Ordinary is the worst thing.' " 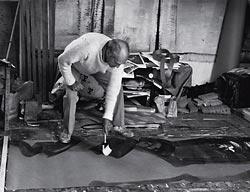 Guy Anderson painted his massive works on the floor of his studio. Although the house is now owned by Breta Malcolm, the studio still feels like the painter just stepped briefly from the room. (JOSEPH SCAYLEA, THE SEATTLE TIMES, 1982) 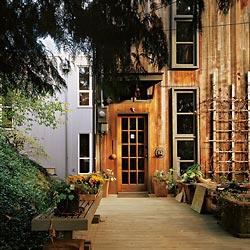 Just outside the door of the original structure is a fenced garden area. Anderson was known for his large works, and he often painted by tacking the huge canvases up on the fence. (BENJAMIN BENSCHNEIDER / THE SEATTLE TIMES) 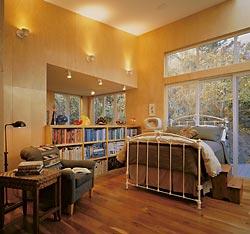 Malcolm calls the addition "my chance to be the center of the universe." In the bedroom, Dale Chihuly glass shines along a packed bookcase. "My daughter said my bookshelf was a mess," Malcolm recalls. "She said, 'Mother, arrange your books by color.' So I did. They look pretty good that way." The bedrock outcropping Middleton confronted can be seen behind the bed. (BENJAMIN BENSCHNEIDER / THE SEATTLE TIMES) 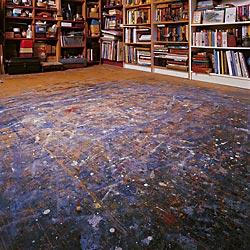 Guy Anderson's studio upstairs remains much the way he left it. The old building is a magical place to Malcolm, and she felt destined to live there. She had lunch with Anderson when he was 90 years old, and calls him a "gentle, sweet human." (BENJAMIN BENSCHNEIDER / THE SEATTLE TIMES) 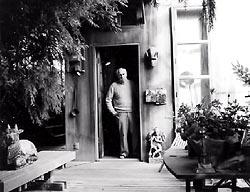 Guy Anderson stands in the doorway of his La Conner studio/home, which looks much the same today. (DERYL WALLS) 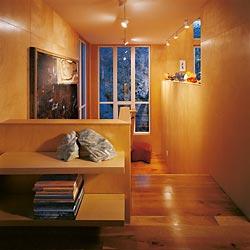 The floor in the addition is American cherry, the walls birch ply panels. "The ply was an enormous investment in time, energy and money, but I hate drywall," Malcolm says. "And they brought out many birch panels before I would accept them as perfect." A Guy Anderson painting hangs across from Dale Chihuly glass. The soapstone sculpture in the foreground is by Malcolm. (BENJAMIN BENSCHNEIDER / THE SEATTLE TIMES) 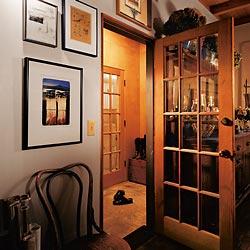 The door from the old Anderson studio/home opens onto the addition, which takes Breta Malcolm either to the garage or upstairs. It's just what she wanted. And that's what she likes about architect Brooks Middleton. "He listens, and there are no wasted spaces." Next to the door are works by Northwest artists Elizabeth Tapper, C.C. Elian and Terri Warpinski. (BENJAMIN BENSCHNEIDER / THE SEATTLE TIMES)
Museum of Northwest Art

La Conner is a natural place for a museum devoted to Northwest artists. Four of the region's most influential artists, Guy Anderson, Kenneth Callahan, Morris Graves and Mark Tobey, lived in or spent time in the Skagit Valley.

On exhibit now through Jan. 8 is a retrospective of the work of abstract painter Frank Okada and glass-and-steel sculpture by Lisa Zerkowitz.

The museum, at 121 S. First St., La Conner, is open 10 a.m. to 5 p.m. Tuesday through Sunday. Admission is $5, $4 for seniors, $2 for students and free for children under 12. The store features one-of-a-kind items from Northwest artists. Check it out at www.museumofnwart.org.