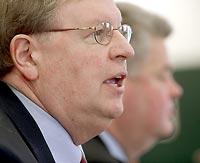 There is a hole in Al Runte's story about why he is running against Seattle Mayor Greg Nickels.

It cuts about a foot deep into the sidewalk on a corner in Wedgwood, left over from when a utility pole was removed five years ago. Runte accidentally stuck his foot in it six months ago and did a face-plant on the cement. He called Seattle City Light to get it filled, leaving a message on a recording. Nothing was done.

To Runte, the hole symbolizes City Hall's inattention to basics and helps illustrate a main point of his campaign for mayor: Nickels is neglecting neighborhoods while giving preference to downtown and South Lake Union developers.

There's a problem with his story, though. City Light says Qwest, and not the city, is responsible for filling the hole. (The phone company, for its part, disagrees.)

Quibble aside, it's as if Runte can't win for losing in this town. A former University of Washington history professor who unsuccessfully sued the school twice after being denied tenure, Runte is articulating virtually the same sentiments that motivated a group of political activists earlier this year to try to recruit a big-name opponent to run against Nickels.

Yet Runte, who wasn't on the recruit list, has been unable to graduate in rank from "protest vote" to "credible challenger."

In the September primary, Runte polled 22 percent to Nickels' 57 percent, and the challenger has raised $17,000, about one-third from himself, compared with the incumbent's half-million.

Fox is voting for Runte, and his coalition is endorsing Runte, "but there is very little enthusiasm in either promoting, supporting or working for his campaign," he said. "Any objective evaluation tells you he doesn't have a prayer of winning, so people are hesitant to spend time on the race. They have other things to do.

"Had he started a year ago and touched bases and made it be known who he was and what he represented, then it would be a different story."

On the campaign trail, Runte lets it be known that he is a scholar and author of five books, ranging in subject from national parks to Western railroads. Let there be any doubt about his scholarship, Runte quotes historian A.J.P. Taylor, ecologist Aldo Leopold and Teddy Roosevelt, whom he describes as his political hero. He also drops the name of the late Victor Steinbrueck, a Seattle urban planner whom he described as a breakfast pal.

Runte was born in Binghamton, N.Y., to a union-machinist father, who died when Runte was a boy, and a school-secretary mother. He moved to Seattle in 1980, leaving a professorship at Baylor University to accept a tenure-track position at the UW.

About 15 years after being denied tenure, Runte sued the university for age and sex discrimination, but the lawsuit was dismissed. In 2002, he sued again for breach of contract and fraud. In September, the State Court of Appeals upheld a lower-court dismissal of that claim. Runte has opted not to appeal to the state Supreme Court, ending a 20-year battle with the school.

"The courts unfortunately have ruled on technical, not ethical grounds," he said.

Runte lives with his wife, Christine, in a modest house in Wedgwood they bought in 1984. Plain-spoken and avuncular, Runte said he decided to run for mayor in response to 25 years of frustration over how Seattle conducts its business.

"This city thinks it's progressive, but it's really backward," Runte said. "It waits forever to do the things it should be doing, and then starts pointing fingers at everybody because nothing gets done."

An absence of campaign momentum has not slowed Runte, who details his differences with Nickels on several issues, including the Alaskan Way Viaduct. Nickels supports a replacement tunnel, while Runte favors rebuilding with a right-of-way for transit, such as rail.

Runte reserves his biggest barbs for what he calls Nickels' disregard for neighborhood concerns, pointing to a backlog in road repairs. Again, Runte does not have to leave his Wedgwood neighborhood to cite an example.

A section of 35th Avenue Northeast is sinking and the city erected a barricade, blocking one lane of southbound morning-commuter traffic. Just like with the hole from the utility pole, Runte called to complain about the problem not being fixed. Runte described the response:

" 'Hello. You've reached the Department of Transportation. Press 2. Press 3. Press 4. Press 5. And if you want all of these excuses in a different foreign language, press 9.' "

As Runte itemizes other potholes and cracks, he declares: "If I was the mayor, I would be on my cellphone calling and saying, 'I want this fixed today!' "

Runte also said he would demand that developers pay their fair share into rebuilding Seattle's streets and bridges.

"The big contractors and construction companies all run off to Santa Fe or Santa Barbara or Boca Raton and build their beautiful big homes and say, 'You know, those suckers up there in Seattle gave me all these incentives to build all these buildings, and I didn't have to put one damn thing into the infrastructure. Aren't I smart and aren't they stupid?' And, you know, they're right."

Runte also points to a new house down the street from his own — a 3,280-square-foot Craftsman with five bedrooms and 3 ½ baths on the market for $799,000. What Runte brands a "trophy house for some dot-commer" was built atop what had been a large yard for a much smaller house.

"If the argument is that the city must increase density, does it have to obliterate its livability at the same time?" Runte asked. "Everyone lives in fear now that any vacant lot in their neighborhood will be turned into one of these big boxes. It's not that the people in neighborhoods are angry about development, it's the fact that there doesn't seem to be any rules anymore.

"Is this development? In my mind, it's greed. This city is telling developers that if they can maximize their profits, they will be allowed to do just that."

"They should be paying us for the privilege of being here. To the argument that they'll then go somewhere else, I say, 'Go! Fine! Don't let the door hit you on the way out!' I cannot afford to subsidize billionaires or millionaires. I'm tired of it."

Background:University of Washington professor 1980-85, independent scholar since then