To fully appreciate the booming popularity of minor-league sports in Snohomish County, you don't need to hear the din of cowbells at a Silvertips hockey match or watch excited fans chat with players after an AquaSox baseball game.

The 10-acre maze on Stocker's farm near Snohomish is cut in the shape of the Everett Silvertips' logo and the team mascot, Lincoln the bear. Inside the maze, there's a trivia game about the team.

In years past, the maze has been cut in the shape of a haunted house and a bucking bronco. But Stocker's new theme, by all accounts, has been a raging success.

"It surprises me how many people show up at the maze in their Silvertips jerseys," he said.

Many factors fuel that popularity, fans and team officials say. Lower ticket prices make games in Everett more affordable than in Seattle, particularly for families on tight budgets. Smaller, minor-league-size facilities put fans closer to the action and promote better access to players. Fans also say they can identify more with the minor-league athletes, many of whom hold second jobs in town or live with host families.

Success on the field — and on the ice — helps, too.

The Silvertips have reached the Western Hockey League playoffs in each of their first two seasons, including a trip to the WHL finals in 2004.

The Hawks reached the playoffs in their first season in the National Indoor Football League, going undefeated before falling in the conference semifinals.

The AquaSox are perennial contenders in the Northwest League, and have been a stop in the professional careers of several current Mariner players, including Willie Bloomquist and pitching phenom Felix Hernandez.

"The fans love us, and our players love them back," said Keith Gerhart, the play-by-play broadcaster for the Silvertips.

Attendance figures confirm the three teams' popularity. The Hawks had the second-highest home attendance out of 22 teams in their league, averaging 4,400 people a game at the events center, said Chris Dugger, the team's general manager.

To make the numbers even more impressive, he added, indoor football isn't a sport that naturally has fans in Snohomish County — many had never seen it before.

The Silvertips' numbers have been even stronger, particularly during their run to the league finals in 2004, when sellout crowds of about 8,600 filled the events center for each home game.

The AquaSox have also seen strong attendance from longtime fans hoping to get a glimpse of the next generation of Seattle Mariners. The Everett team drew a record crowd of 5,104 for a doubleheader last season and had an average home attendance of nearly 2,900.

The 2003 debut of the events center opened the door to new minor-league-sports success in the county.

Before the Silvertips' first home game at the events center, a Western Hockey League commissioner called the facility "absolutely perfect" and "incredible in every way."

Fans have echoed that sentiment. They say its capacity offers a much more personal setting than Seattle's KeyArena, which can seat about 17,000 people and is home to the Silvertips' local rivals, the Seattle Thunderbirds.

Jim and Grace Kolthoff of Marysville attend most of the Silvertips' home games but usually won't travel to Seattle if the Silvertips are playing there, in part because they find that arena just too big.

Jim Kolthoff, who was sporting a Silvertips jersey and a well-worn green cowbell during a recent home game, said the appeal of a smaller venue also applies to the AquaSox, who play their home games down the street at Everett Memorial Stadium.

At Safeco Field, the home of the major-league Mariners, "you can't see what's happening from 80 percent of the seats," he said. "And if you get a hot dog, you lose three innings."

Though it doesn't have the sheen of the 2-year-old events center, Memorial Stadium has a lot of fan allure, said Dave Larson, who is working on a book, due out in June, about the history of Northwest baseball.

"Between every half-inning, there's something going on on the field," he said. "It's great family entertainment."

The fun often takes on a funky, small-town flavor. For years, haircuts have been offered in the stands at AquaSox home games. It's common to see radio-controlled cars speeding around the baseball diamond while players take infield practice. Fans can get a different game experience by sitting on a grassy knoll near right field.

A multimillion-dollar renovation of the stadium was completed for the 1998 baseball season and included more seating, a larger concession area and new lighting.

"The concessions stands are very good," Larson said. "They've got some great food there."

The success of the AquaSox can be traced to a long-standing history of baseball in Snohomish County, said Larson, who has scoured old newspaper articles for information for his book.

Though professional single-A ball didn't come to Everett until 1984, first as the Everett Giants and later the Mariners-affiliated AquaSox in 1994, the county has had semipro teams since 1901, Larson said.

Playing in an "industrial league," those teams were made up mostly of workers from local companies, Larson said. Fans loved and supported it, he said.

Everett still has the Merchants, a semipro team that plays in the Pacific International League.

Everett's minor-league teams recognize the importance of keeping games affordable, and each has made an effort to market to families, including those without a lot of money to spend.

"You can bring a family of four for $50 bucks and have a good time, including feeding the kids enough hot dogs to make them sick," Larson said of AquaSox home games.

Tickets for AquaSox games ranged last season from $7 for lawn seating to $13 Diamond Club seats, where fans could place food and drink orders with stadium workers and have their items brought to them. Single-game Silvertips tickets range from $10 to $26, and Hawks seats sold for $7 to $33 during their inaugural season.

By comparison, Mariners tickets cost $7 to $50 this past season, and seats for a Seattle Seahawks football game range from $33 to $315.

But many fans appreciate that aspect, Larson said. Fans like knowing that most players on the Silvertips, AquaSox and Hawks are just regular folks who often stay with local families and/or hold second jobs.

"That's what really gets you into the game, is knowing the players. They're not anonymous like in the NHL [National Hockey League]," said Jim Kolthoff, who called the players by their first names at a Silvertips home game last week. 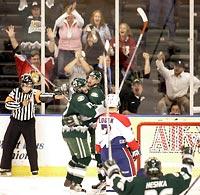 Silvertips players Karel Hromas and Torrie Wheat celebrate a goal last week against Spokane. A playoff team in both of their first two seasons, the Silvertips have put up strong attendance numbers. "The fans love us, and our players love them back," play-by-play broadcaster Keith Gerhart said. (JIM BATES / THE SEATTLE TIMES) 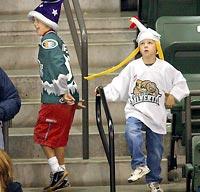 Two young Silvertips fans participate in a "Dancing for Your Dinner" promotion between periods at the Everett Events Center. (JIM BATES / THE SEATTLE TIMES)

Albert Higgs, the Everett Hawks' quarterback last season, was a fan favorite. He led the team to 15 straight wins before a close loss in the playoffs. (MARK HARRISON / THE SEATTLE TIMES)

After one year in the National Indoor Football League, the Everett Hawks were named an expansion team for the arenafootball2 league. Spokane also has been awarded a franchise. Here are the teams: