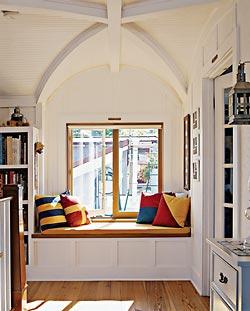 A window seat at the top of the stairs is a perfect reading nook, sitting next to the stairway bookshelves. The seat lifts up for storage. (PHOTOS COURTESY OF TAUNTON PRESS)
By Rebecca Teagarden

GOT A HOUSE that's not so big — with not so much as even a hope for transforming it?

The character, the charm, the class, the comfort, all of those reside in the details of a house of any size: Moldings, flow, materials, proportion. And the right combination gives a small house a grandeur all its own. Makes it a home.

"One reason that so many older homes are venerated is because they have this zoomed-in attention to the little things. Most people assume it's the building's age that gives it charm, when in fact it's the attention to the smaller details that makes it feel so good."

Those are the latest words from Sarah Susanka in her just-out book "Inside the Not So Big House" (Taunton Press, $34.95). The Minnesota architect has become an architectural guru for small-home owners through her "Not So Big" series.

Her first book, "The Not So Big House," came out in 1998. It spent more than two years as one of the top five best sellers on Amazon.com's home-and-garden list. Her second book, "Creating the Not So Big House," hit the top of The New York Times advice and how-two best-seller list. Susanka struck a nerve, others followed, and her fans have awaited word.

Here it is. This latest chapter in the "Not So Big" franchise explains "how to fill a home with the personality of its inhabitants and give it an enduring presence in a reasonably economical fashion."

As in less stuff, more character.

By details, Susanka's not talking about accessorizing. She wants us to take a good, hard look at what would still be there if you could turn your house upside down and shake it. Coves, box beams, plate rails, stair posts, fireplace mantels, cabinets, trim.

Which brings us back to detail — and focus. And to the very focused, beautifully detailed Lake Union houseboat of Barry and Val Burgess. Susanka says it's her favorite house featured in the new book.

The Burgesses are empty nesters who emptied out a 3,000-square-foot nest in Idaho to move into a 700-square-foot floating job on Lake Union a few years back. It wasn't much to look at with its 1970s redo, leaky roof, mold and rats. But Barry, a building design consultant, knew what to do. A boat should look like a boat, he decided. And his would evoke the feeling of the classic 1920s wooden yachts.

He called for a coffered ceiling of hand-rubbed fir beams against white bead board. Newel posts taper to suggest lighthouses. A porthole serves as a small bathroom window. An open second story gives the Burgesses an extra 600 square feet or so for an office, sewing area, piano, painting easel, deck and a crow's nest view of the lake and Space Needle.

Either side of the fireplace surround houses hidden storage for tapes and CDs. The television sits in a cabinet tucked into the fireplace surround on a lazy Susan, turned one way for watching in the living room and another for the bedroom. The kitchen, with rich cherry cabinets camouflaging pullouts, has more storage than many much larger homes. The microwave sits behind a cabinet door because "You can't have a microwave in a 1920s boat," Val says.

The bathroom, Val's favorite spot, is downright spacious with a big soaking tub lined by windows to the south and west that come right down to the rim. It's practically like bathing in the lake. Also in the bath is the laundry and a built-in ironing board, with a walk-through closet just beyond.

This is the kind of "graceful economy" Not So Big houses are all about. And the Burgess boat-as-home illustrates perfectly the levels of detail Susanka seeks to help us see:

Details in context (larger items such as accent walls, window seats, built-in cabinets, hearths): "A lot of people think in terms of style. I like to think in terms of history, especially for a houseboat," Burgess says. "We have a living room, dining room and kitchen sharing one space. How do we carry those details throughout those rooms? What do I want it to say?"

Details in combination (the marriage of materials): "Having the windows built of the same material as the house worked for us," he says. "And using the red fir, an indigenous product. Why would I want to use cypress from Louisiana?"

Details in focus (those that resolve the meeting of materials. Can be most invisible and most elegant): "The wainscoting is a unifying feature for the rooms. It gives the house a base. The trim also sets the tone for how the structure carries throughout the house. Composition and balance: You'll find that to be true of any piece of art," says Burgess, who is also a painter. 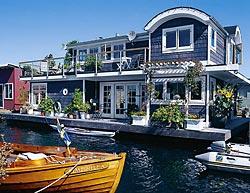 Barry Burgess transformed an age-weary 700-square-foot houseboat into a 1,367-square-foot floating home of distinction by harking back to the grand wooden yachts of the 1920s. (PHOTOS COURTESY OF TAUNTON PRESS) 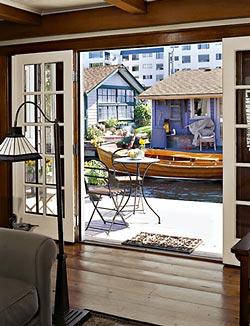 The living-room space spills out to the waterside deck through French doors. Author Sarah Susanka calls the effect a beguiling contrast between the tidiness of the paneled interior and the jumbled neighborhood of floating decks, boats and houses. (PHOTOS COURTESY OF TAUNTON PRESS) 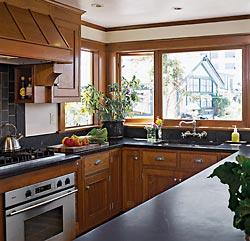 The Burgess kitchen, with cherry cabinets and soapstone counters, features plenty of room to move, and a great view, too. Susanka says continuing the countertop material up to the windowsill for a simple and elegant backsplash is a smart idea in a kitchen of any size. (PHOTOS COURTESY OF TAUNTON PRESS) 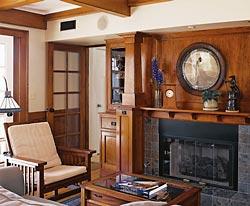 The three-dimensional coffered ceiling helps relieve the low ceiling height. The contrast of the fir beams against the white bead board keeps the ceiling from feeling too dark and heavy, a trick borrowed from yacht builders of yore. (PHOTOS COURTESY OF TAUNTON PRESS) 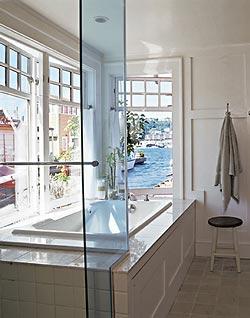 Val Burgess loves her bathroom, with its on-the-water feeling from corner windows that come right down to the tub. Sarah Susanka says its the equivalent of a corner window seat. Val, in fact, often takes her morning coffee perched on the tubs edge. Floors with radiant heating keep the room toasty on blustery days. (PHOTOS COURTESY OF TAUNTON PRESS) 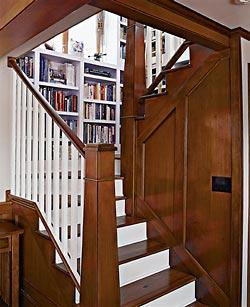 Susanka says stairway-as-library is one of the most pleasing and useful elements to build into a home. The lighthouse-shaped newel posts do their part for the nautical feeling. (PHOTOS COURTESY OF TAUNTON PRESS) 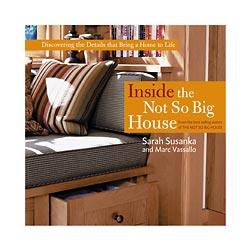 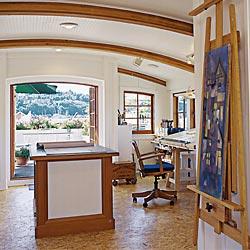 The curved ceiling, with white bead board and red fir, gives a graceful flow to the open second story. Susanka says particle board (used here for flooring) is perfectly decent material when treated with integrity. Beyond the work table is Lake Union. (PHOTOS COURTESY OF TAUNTON PRESS)
Big Ideas for Small Spaces

Storage space within a wall: Sneak storage and display space by removing a section of Sheetrock and fitting shelves between framing studs.

Desk nook built into a room: Place two deep bookshelves against the corners of an exterior wall, to either side of a window. Connect them with a desktop.

Shelves across a window: Add storage and get a little extra privacy without losing natural light. Glass shelves supported by brackets attached to the window frame are an easy fix.

Interior windows: An operable window set in a wall between rooms connects but maintains a controllable degree of separation.

Wide, but not too wide: A wide opening helps space flow, but a too-wide opening diminishes the definition of each room. A doorway that's 4-feet-6-inches wide is just right.

A simple curve: Few things add energy to a room like a curve. In a kitchen, use curved brackets to support an overhanging countertop or tabletop.

Floating ceiling lattice: A great way to define a work area or sitting area at the edge of a room is with a wood lattice hung from the ceiling. Put lights above the lattice and let the light shine through.

Light to walk toward: We humans have a natural propensity for moving toward light. A window at the end of a hallway will pull us through. If adding a window is difficult, install a wall sconce or put a spotlight on hanging artwork.

Ceiling that defines space: Even without walls, a ceiling can define a room-like area. Use Sheetrock to add a curve to the ceiling above a dining area. Or paint a ceiling over the table a special color to help define the eating area below.

Pod of space: This is a fancy term for a free-standing closet-like element set within a room. A pod helps shape space (defining an entry area in a corner of the living room, for instance) and also contains space for storage or display.

— From "The Inside the Not So Big House"