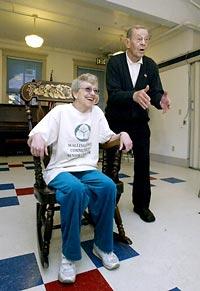 Her eyes narrow with determination, Carol Ballard is primed for competition.

"I was unprepared last year," she explains. "This year, I will drink fluids. You need to drink a lot of water, but not so much that you'll have to go to the bathroom in the middle of it."

Tomorrow, when the starter shouts "Go!" the 75-year-old will compete for her team — the Jolly Rockers — in the 21st annual Rocking Chair Races.

It's a little-known sport where the athletes' ages can top 80, and there are no coaches, no victory cups and no endorsements. Instead the winner will know the thrill of speed-rocking and, most important, will earn bragging rights at the senior center.

Like all athletes facing a tough competition, the seniors look forward to the race — which raises money for the Wallingford Community Senior Center — with a mixture of excitement and dread.

"I hope to make it through without passing out," says Ballard.

Her teammate, Karen Kay, is new to the game at the age of 63. She's been in training for several weeks, practicing in her chair at home. She also has been lifting five-pound weights and walking around Green Lake to get in shape.

"I'll probably load up on carbs that day," says Kay, her soft voice betraying a hidden competitive streak. Nobody knows the maniacal rocking abilities they possess until they get into the chair on race day.

Race organizers anticipate four heats this year with 15 teams competing. The chairs don't actually go anywhere; a device attached to the chair — a rockometer, if you will — records the number of swings, which are displayed on a screen. The faster the rocker, the higher the score.

The race can be hard on bodies that aren't used to vigorous exercise. Ballard doesn't even remember where the Jolly Rockers placed last year.

"I didn't care. I just wanted to get out of that chair."

The Jolly Rockers, who have endured a long-standing losing streak, have noticed the arrival of two new teams that could pose a challenge at tomorrow's race, the University House Wallingford and the Ida Culver Broadview Nursing Home.

The newcomers think it'll be easy. But they haven't felt the burn of the stomach muscles or the need for Ben Gay that is sure to follow. Staff members of the two retirement communities, both owned by ERA Care Communities, have faced off in past fund-raisers, and a nascent rivalry has developed.

"We have them beat, hands down," says Lynn Carpenter, 62, of University House, referring to the other first-time competitor, the Ida Culver House. "They're still tired from the Alzheimer's Walk in September."

"They're not a threat," she counters with unshakable confidence.

With a similarly hectic preseason training schedule that involves practicing in a borrowed chair at Rotary Club meetings, the Fremont Rotary Rockers expect to reverse a string of recent defeats.

Their 63-year-old star rocker is on the disabled list after he fell recently and broke his leg. "We're all going to say he has to come anyway," says team captain Candace Barroga, 54, a prolific rocker. "He's in a cast, but he can still rock."

Has an overzealous rocker ever become so excited that he was pitched overboard to the ground, head over chair?

"Nobody has ever fallen. It's amazing," says Stan Stetz, who has spent many of his 82 years fund-raising for the event. Last year, the center raised $5,500, just from the races. Each team that participates is encouraged to raise at least $500 for the center. Winners of the race receive gift certificates to local restaurants like Dick's Drive-In, also a competitor this year.

Last year's victory went to Children's Hospital, with the most rocks overall. How did Children's pull off the win?

They stocked their team with teenagers.

No rule exists to prevent putting young people on a team, says team captain Melissa Hughes, 43. Her own training regime is less strenuous than others. "I plan to avoid rocking all together."

Diana Wurn is a freelance writer based in Seattle.

Cheer on the chairs

The Rocking Chair Races and Fall Fest, which includes a silent auction, takes place 10 a.m. to 2 p.m. tomorrow at the Wallingford Community Senior Center, 4649 Sunnyside Ave. N., Wallingford. The races start at 11:30 a.m., and admission is free. The center is located on the ground floor of the Good Shepherd Building.