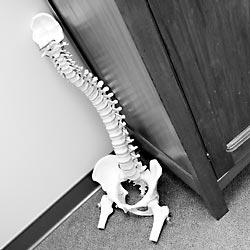 Jones keeps a model of a human spine in his office for reference. Rolfers concentrate on the connective tissue as a way of helping the body integrate itself. (Ken Lambert | The Seattle Times)
By Richard Seven

ULTRA-MARATHONER Leah Jurek is 29, and has been running since fourth grade. She chalks up her longevity to great role models, good coaching, smart training and proper vigilance over stretching, eating and rest. She also believes in regular massage. In fact, she became a massage practitioner four years ago.

When struggling with a nagging hamstring injury two years ago, she chose Rolfing because she was impressed not just by the relief she experienced but by Rolfing's holistic concept of treating the body. "I thought this work was much more specific and purposeful than any other bodywork I have received," says Jurek.

The body is a wonderful whole of many parts, which is why massage makes sense for athletes of varying ability. Hard-core athletes get regular massage to help them prevent injuries, prepare for an event or relieve swelling and help maintain flexibility. Ignoring soft-tissue damage can lead to chronic injury that stunts rehabilitation as well as performance. Constant muscle tension from regular activity can cause overwhelming stresses on joints, ligaments, tendons and muscles.

Given the many types of massage and bodywork, the one you pick depends on what you want it for. Massage can be gentle or somewhat rough. It can be directed at the whole body or particular parts or functions. Some practitioners think the therapeutic benefits of massage are due, in part, to its ability to effect changes in the musculoskeletal, circulator-lymphatic and nervous systems.

Swedish massage, the most common form practiced in the U.S., involves long, smooth strokes and kneading, concentrating on soft tissue near the skin's surface. Athletes often favor deep massage or sports massage. Both employ direct pressure on the muscles. Massage, of course, also varies with the practitioner's skill.

Jurek said Seattle Rolfer Brad Jones helped her work more efficiently. Rolfers think life's stresses, injuries and bad habits — along with gravity — can misalign and tighten your body. That, in turn, causes pain, fatigue and other symptoms. When the body compensates for a weak link, the entire structure is weakened, Rolfers say. By manipulating the myofascial tissue in a series of sessions, Rolfers say they can help the body reintegrate itself.

Rolfing, developed by American biochemist Dr. Ida P. Rolf, is also known as structural integration. It feels like deep-tissue massage, but focuses on the connective tissue that forms a web of support throughout the body. Practitioners often use significant pressure. Some people complain it hurts a little.

"I'm looking to make changes in the person's structure with my hands," says Jones, "but also by educating people in how to use their bodies better. A massage is done to you, but in Rolfing, you're an active participant."

It's an odd sensation to stand before another person who is examining your posture, but that's how I began my Rolfing session. I thought I was standing perfectly straight, only to be told I was one step above The Crooked Man.

My right shoulder rotates inward and down a bit, probably from being right-handed, sitting, typing and navigating a mouse too much. My head perches forward a little, partly caused by the tightness in my chest, which in turn causes tension through the front of my neck and upper back. And my breathing is shallow.

The fascia, the fibrous tissue between the skin and the underlying structure of muscle and bone, throughout both arms was "very bound and thick."

Jones spent most of his time working on that stubborn buildup. I get a deep-tissue massage once a month and found my Rolfing session more intense, feeling the mild pinching as he worked through the fascia wall. I felt great by the time I walked out of the session, but how long would it last? Not long, he told me, if I didn't pay attention to how I shape my body through my daily habits and actions. You know, the gravity of life.

Richard Seven is a Pacific Northwest magazine staff writer. He can be reached at rseven@seattletimes.com. Ken Lambert is a Seattle Times staff photographer. 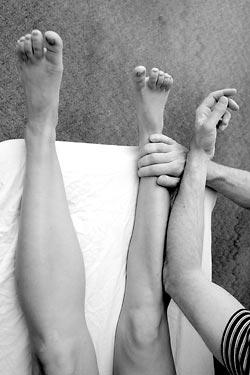 Brad Jones works on Leah Jurek, who says she admires the relief she gets from Rolfing but also likes the way it takes a holistic approach to helping the body. (Ken Lambert | The Seattle Times)
Find the right fit

Which massage suits you? Depends on your goals, tolerance and other factors. Learn about a therapist before you let him or her go to work on you. It's a personal thing; and, in rare cases, people get injured.

For a primer, go to www.amta-wa.org and click on "massage information." The site also helps you figure out how to assess a therapist.

You can see if a practitioner's license is active, how long he or she has had it, and if there have been any complaints. Go to the Washington state Department of Health Web site at www.doh.wa.gov and do a "provider search."