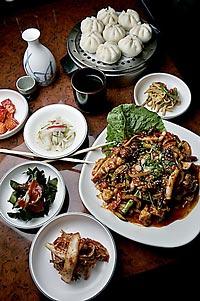 Federal Way is home to two of the Seattle area's top attractions: Wild Waves and great Korean food. The former offers waterslides, roller coasters and an antique carousel. The latter features grilled meats, spicy squid and dumplings. Frankly, I find the two equally exciting, and at a Korean restaurant, you're never turned away for being shorter than a wooden sign.

Kokiri is a newcomer on the Federal Way Korean scene. It's not the wildest thrill ride in town, but it's a reasonably priced performer that rarely disappoints and sometimes delights.

Housed in a former pizza place on Pacific Highway, Kokiri has ample dining space, with many tables adjacent to a long bay of windows (which admittedly is adjacent to the parking lot). A TV shows Japanese television; one night it seemed to be playing assorted disaster footage from around the world.

Order the house tea, a gingery herbal blend. Whatever you do, don't drop a quarter in the tea-vending machine near the front door: It produced a cup of tea that reminded me of diluted dishwashing soap.

Order more dumplings than you think you need — aside from being addictive, they're a nice mild bite to reach for later in the meal when you need a break from spicier fare.

"You know what you want?" our waitress asked. Before I could reply, she said, "Americans usually like ... " I interrupted. "We'd like the YumSo Tang."

"Even I don't get that," she replied. I'd ordered a "traditional Korean health soup" with goat meat, scallions and sesame leaf ($11.95). It turned out to be uncontroversial: Everyone at the table liked it, and the bitter sesame leaf provoked more comment than the mild goat.

Another soup, BuSutSeng Bulkogi ($24.95), from the "Korean Grand Dishes" section of the menu, featured enoki, shiitake and oyster mushrooms with thin slices of beef, spinach and rice noodles. The huge bowl of soup was reminiscent of Vietnamese pho and, like pho, it came into full flower with a shot of hot sauce — here, the Korean gochujang.

OhJungUh Bokkum ($8.95), spicy stir-fried squid with vegetables, is one of my favorite dishes at any Korean restaurant, and Kokiri's version is delicious. The squid is cooked with carrots, zucchini, red pepper and jalapeños, then liberally anointed with spicy sauce and sesame oil. The sauce establishes a baseline of spiciness that is then heightened by each nibble of jalapeño.

But not everything at Kokiri is explosively flavored. One of my dining companions noticed a photo of a broiled fish on the wall. "Is that a mackerel?" she asked. It was, a whole mackerel ($9.95), perfectly cooked, seasoned with nothing more than salt.

An unusual wrap plate called bossam ($14.95) is a tableau of blanched napa cabbage leaves, steamed sliced pork, kimchi, peeled garlic cloves, jalapeño slices, and — this being the unusual part — raw oysters. I will admit to pausing before taking my first bite. But bossam turns out to be little more of a stretch than combining clams and chorizo in the Portuguese cataplana or pork and shrimp dumplings at dim sum. Here, the kimchi moderates between the briny oysters and mild pork.

HamHeung NengMyun ($7.95) is the perfect dish to say farewell to summer: a bowl of chilled and very chewy noodles (made from potato starch) with daikon and a slice of beef, lightly dressed with a spicy sauce. The waitress attacked the noodles with a pair of scissors, which seemed to make no difference: They were still delightfully long and messy.

Like any Korean restaurant, Kokiri delivers many plates of panchan (mostly pickled appetizers) at no extra charge. Some of the standouts were a marvelously fresh and light cabbage kimchi (made daily), a plate of shredded fishcake and some tiny dried anchovies, a good nibble to reach for when you're not sure which platter to replenish your own plate from. The plate of very American radiatore pasta salad was not a standout.

In addition to large bottles of watery Korean lager, Kokiri offers several varieties of rice wine, called soju. I tried bek seju ($10 for a large bottle), a sweet herbal rice wine often quaffed for its reputed health benefits. Let's just say it was no more tasty than any other health beverage, although it was better than the vending-machine tea. There are some unflavored sojus, similar to sake, that you might gravitate toward instead.

Service was prompt and efficient — with one exception. At one point, our waitress excused herself mid-order to exchange long goodbyes with another table. Annoying, yes, but look at it this way: If you become a regular at Kokiri (and they remembered me the second time I went in), maybe she'll abandon another table to spend more time with you.

Who should go: South End Korean fans who don't insist on a tabletop grill.

Beer and wine / major credit cards / no smoking / no obstacles to access.