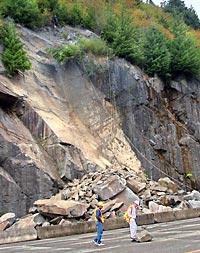 State Secretary of Transportation Doug MacDonald, right and Don Whitehouse, of the Department of Transportation, examine a boulder removed by an avalanche crew from the top of a rockslide on I-90. Rocks covered all three westbound lanes yesterday before crews cleared the roadway. (MIKE SIEGEL / THE SEATTLE TIMES)
By Karen Gaudette
Seattle Times Eastside bureau

An early-morning rockslide along Interstate 90 west of the Snoqualmie Pass summit yesterday left three women dead and snarled traffic for miles after boulders the size of cars crushed their Volvo and tumbled across the highway.

All westbound lanes were closed at Easton east of the summit for more than 12 hours so geologists could assess conditions, crews could clear debris and climbers could ascend through fog and mist to pry down loose boulders with crowbars to prevent additional slides.

"This is a terrible tragedy for the people involved," said Doug MacDonald, secretary of the state Department of Transportation. "We know we have people inconvenienced, but we're not going to have somebody else come down here and meet the same fate these people did last night."

The lanes were reopened at 3 p.m.

A large section of rock wall broke off the hillside and struck the car a little after 1 a.m., said Washington State Patrol Trooper Kelly Spangler. Three 28-year-old women, from Lynnwood, Bothell and Castle Rock, were killed. Their names were not released last night pending notification of their families.

State geologists were investigating what may have triggered the slide. MacDonald said the state assesses the stability of slopes along highways as part of regular road maintenance and adds stabilizers, removes rocks or takes other steps when they appear likely to give way. This slope was not high on the priority list, he said, because geologists did not anticipate an imminent slide.

"We've had other ones elsewhere in the state we were working on first," MacDonald said. "We're always trying to do this work as we have the funds to do it."

MacDonald said the backup was three to four miles long when he arrived around noon. State highway cameras showed semi-trucks, pickups, RVs and other traffic waiting out the closure. Others followed lengthy detours along Highway 2 over Stevens Pass or crossed Highway 12 over White Pass.

The slide occurred on the other side of the pass from a rockslide fatality in 1998. Then, a Spokane woman driving a semi-truck died after she crashed into rocks that fell onto the westbound lanes about 5 ½ miles east of the summit.

State Secretary of Transportation Doug MacDonald examines granite at the scene of a slide yesterday on I-90, west of Snoqualmie Summit. Three women died in the accident. (MIKE SIEGEL / THE SEATTLE TIMES)