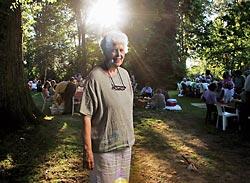 At 80, civic activist Kay Bullitt has long worked for peace, social justice, historic preservation and international understanding. She helped found Bumbershoot and a savings-and-loan bank for women. She also throws a great picnic. Every Wednesday evening in July for the past 47 years, she's invited family and friends to spread their blankets and baguettes at her North Capitol Hill home.

Q: How did the picnics start?

A: It wasn't easy to entertain with five children, the summer was so nice, and it was such a nice big yard. I wanted to share it with people . . . to start a tradition so the kids would always be comfortable inviting their friends and their families. Everyone feels comfortable coming to a picnic. Every year, we have people from all over. Last week, someone brought someone from Yugoslavia. People bring their own food. I provide watermelon, Popsicles, ice cream bars and coffee. Last night we had 250 people. If I had to feed everyone, I don't think it would have lasted 47 years!

Q: If food isn't the main ingredient, what IS the secret?

A: It isn't formal. They can come any way they want. Really, it's something anybody can do. If they don't have a big yard, they can always go to a park.

A: It reinforces whatever good things people are doing in their lives. They find other people with similar interests. It doesn't mean they have a project they do together, but they're encouraged to keep doing what they're doing.

Q: Tell me about the picnic grounds.

A: Before the turn of the last century, a family from Minnesota named Henry built a house here. They had a barn. On top, they had an art gallery and it went to the university for the Henry Gallery. When they moved, they gave the property to the city for a library. The city decided after World War II they wanted the library closer to the shopping area of Capitol Hill. (Eventually, the property was sold by the Bloedel family to Kay's then husband, Stimson Bullitt.) In the '60s I had (an integrated) day camp here. It was right after the March on Washington and people were exercised about the schools. The kids enjoyed sharing their experiences. We had a baseball backstop in those days, a stand-up pool. I did Greek tragedies, and some parents taught music, and Betty Jane Narver taught Chinese calligraphy. For the past four years, we've had a Middle East peace camp . . .

The city needs open space more than buildings. So when I die, this is going to be a park.