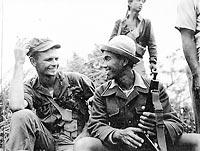 The real Bob Prince, now 85, graduated from Garfield High School and Stanford University. After the war he returned to the area, working for 28 years as an apple seller in Wenatchee.

Prince, now retired, served as a consultant throughout the filmmaking, viewing parts of the film during production and judging them for accuracy. Prince, who has seen the finished picture, said the movie holds up to the history.

And what a history. From his condo in Port Townsend, Prince recalled the January 1945 raid near the town of Cabanatuan, Philippines.

"I was excited and apprehensive to the point that we wanted very much to succeed, not just for ourselves, but for the people we were trying to rescue," said Prince, then 25 and a 3 ½-year Army vet. "We were aware of their mistreatment, but not just how bad until we talked to them."

Many of the prisoners were survivors of the 1942 Bataan Death March, where they were forced to walk 65 miles while watching their comrades die of thirst, starvation, malaria, dysentery or execution.

Those at the Cabanatuan prison camp had endured nearly three years of abuse. And in August 1944, facing a losing war, the War Ministry in Tokyo ordered that the prisoners, like all POWs, be killed. In December 1944 the Japanese burned alive 150 Americans at the Palawan POW camp.

So the rescue of the Cabanatuan prisons the following month — the "great raid," under the command of Lt. Col. Henry Mucci — was a race against time.

"The plan developed after we got into the area," Prince recalled.

Along with Prince's Rangers, the attack involved the Army's special reconnaissance Alamo Scouts, Filipino guerrillas and civilians, and an Air Force plane.

"We were forced to delay a day because of a sizable Japanese force that drove by. We had to wait 24 hours, and during that time we got better information as to the layout of the prison and how we would structure our attack that was very helpful."

The attack had to be invisible.

"We had to crawl across their field not on your hands and knees, but on your stomach, cradling a rifle," Prince recalled.

The job of the Air Force P-61 night fighter pilot was to divert attention away from the Rangers as they crept over a dry streambed in broad daylight.

"He did a wonderful job," Prince said. "He cut his motor once, which sounded like he was in trouble."

Then, at dusk, the raid began. Success came quickly.

"It was 30 minutes from the time the shooting started until I was standing there almost in silence," said Prince, describing a "deathly quiet" that followed the cacophony of the quick attack. By its end, the POWs were on their way to safety, Prince's Rangers were out and the Japanese were all dead, he said.

Prince said he walked through the camp and checked the barracks to be sure all the POWs had been extracted.

"The best part came the next morning — I was the last man, the rear guard, when we delivered the last of the prisoners to safety," Prince said. It was "10:30 the morning after the raid, and we'd covered about 25 miles during the night. Mucci arrived [with the first prisoners] at our lines at about 8 o'clock, so it took us about 2 ½ hours to straggle in."

Prince emphasized that the mission would have failed without all five elements, including the Filipino civilians, who provided ox carts for transporting immobile POWs.

"We had both a good plan and some good luck," he said. "It could have been a real bad one if it turned out the other way."