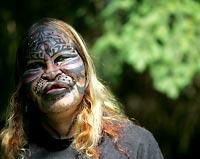 Dennis Avner, known as the Catman, recently moved to Freeland from Southern California. Avner, who is part Huron and part Lakota, has had several surgeries and tattoos to transform himself into a tiger, his totem animal. (LAURA MORTON / THE SEATTLE TIMES)
By Vanessa Ren&eacute;e Casavant
Seattle Times staff reporter

At a time when plastic surgery has become fairly commonplace, some believe the Catman of Whidbey Island may have gone too far.

Dennis Avner, who goes by his Native American name, Stalking Cat, is known around the world as the Catman. Over the past 25 years, Stalking Cat, 47, has received so many surgical and cosmetic procedures he's lost count. And he says all of them — from full-face tattoos to fanged dentures to steel implants for detachable "whiskers" — have been done to achieve oneness with what he calls his totem, the tiger.

"I'm Huron and Lakota," he said, relaxing barefoot in his Freeland living room. "I'm just taking a very old tradition, that to my knowledge is not practiced anymore."

But some doctors contend that Stalking Cat displays a form of body dysmorphic disorder, which affects one's perception of personal appearance to the point of obsession.

Glenn McGee, director of the Center for Bioethics at Albany Medical College in New York, said it's true that traditional peoples around the world have, like Stalking Cat, tried to emulate animals as a model for virility. But McGee said he believes the extreme to which Stalking Cat is pushing medical technology is dangerous.

"Cosmetic surgery is a practice based on informed consent" that needs to balance the risks with the benefits, he said. McGee believes Stalking Cat is seriously risking his health by undergoing so many surgeries.

"It is possible to have a coherent view that is nonetheless detrimental to one's well-being," McGee said. "This is a patient who's being harmed by medicine in the interest of his tradition."

The result is certainly manifest in a startling way in his appearance. Stalking Cat has been featured on "Ripley's Believe It or Not!," "Larry King Live," VH1's "Totally Obsessed" and other television shows. There are several Web sites, blogs and chat forums devoted to him, including his own, www.stalkingcat.net, and the online journal www.livejournal.com/users/stalkingcat.

He insists his unusually startling appearance is nothing more than trying to make physical his spiritual and traditional calling. He was raised in a small Michigan town near the Grand Traverse Band of Ottawa and Chippewa in Sutton Bay. Respect for the old ways, he said, was passed on to him by a Huron medicine man. Undergoing extreme measures of body modification, he said, is simply taking advantage of modern technologies to practice a devotion that's been lost.

Stalking Cat started his transformation in 1980 after leaving his post as a sonar submarine technician for the Navy. He eventually settled in the San Diego area as a computer technician, and began the series of procedures that has resulted in his current appearance.

He has had all his teeth removed and replaced with tigerlike dentures and fangs. He has had his lip split to resemble the mouth of a cat. He has six stainless-steel mounts implanted on his forehead and 18 piercings above his lip to which he can attach whiskers. He has had nose and brow implants, and silicone cheek, chin and lip injections. The tips of his ears are pointed. And he has so many tattoos they almost cover his body.

Stalking Cat said he has lost track of how much his transformation has cost, though one figure quoted on a Web site estimates it would cost more than $200,000 — a figure Stalking Cat would neither confirm nor deny. He would only say, "It's a lot."

As for any pain, Stalking Cat said some of the procedures hurt, but says there is no ongoing discomfort: "This is me," he said. "This is who I am."

The man responsible for the majority of Stalking Cat's most extreme procedures is Phoenix body-modification artist Steve Haworth. He could not be reached for comment, but Stalking Cat is featured on Haworth's Web site, www.stevehaworth.com.

Stalking Cat said he next plans to start tattooing the rest of his body with tiger stripes and to go back to Haworth to have stainless-steel mounts implanted in the top of his head so he can attach catlike ears to them. But further procedures will have to wait while he goes about the more mundane process of finding a job and fixing up the home he has shared since May with friends Tess Calhoun and Rick Weiss.

"The people here have been pretty welcoming," he said.

He has already found a local manicurist to paint his fingernails. "They don't look very good today," he said, examining the tiger print detailing on them. "I'm still teaching her how to do it."

"I think he fits in well on the island," said Sarah Pankau, 18, who works near Stalking Cat's house. She said there's already a diverse mix of people on the island and he's a welcome addition.

Nevertheless, not all islanders have embraced him. After Stalking Cat announced his move on his online journal, a person with the screen name "atomicdrunk" said, "... we have lots of hunters here. You can move here if you agree to stay in the woods and not wear orange."

Stalking Cat has created a different kind of family with Calhoun and Weiss, a married couple he has known for almost five years. When the two recently relocated to Washington from California for Weiss' job with Boeing, they asked Stalking Cat to join them. He keeps busy doing renovations on their home.

"What we have going here works very well," he said of living with the couple. The household also includes two (real) cats, Morris and Pretty Girl; two Pomeranians; one albino garter snake; and three geckos.