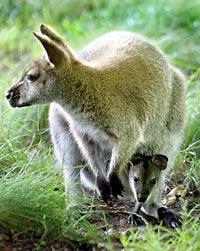 In the backyard pen at the Fall City Wallaby Ranch, Victoria "Vicky" watches other wallabies as her unnamed baby looks out of her pouch. About a dozen of the macropods live at the ranch. (STEVE RINGMAN / THE SEATTLE TIMES)
By Sherry Grindeland
Seattle Times Eastside bureau

Their first baby wallaby was so cuddly and cute that Rex and Tawny Paperd couldn't resist buying another. And another. And still another.

Now, nearly four years later, the couple have turned their country home into the Fall City Wallaby Ranch where wallabies roam in large outdoor pens and a baby kangaroo named Rocky hops from kitchen to living room to bedroom.

Rocky will be 6 feet tall and weigh 200 pounds when mature, while the wallabies, which are smaller varieties of kangaroos, average 20 to 30 pounds and stand less than 3 feet tall. The couple recently added a wallaroo, which looks like a combination of the two animals.

The Paperds show off the animals during hands-on educational programs at schools, camps and nursing homes. They also offer group tours of their ranch.

Their mob — a group of wallabies or kangaroos is called either a troop or a mob — numbers between 10 and 14. The population ambiguity stems from the wallaby development cycle. Although females give birth about every 10 months, it can be hard to tell just when the baby arrives. A mother will still be nursing one joey, or baby, when her next infant, hairless and the size of a bumblebee, is born. It climbs up the fur of her belly, latches onto a nipple and snuggles into her pouch, where it develops for another six months.

When it has grown fur, opened its eyes and developed from a few ounces to several pounds, the Paperds pull the baby out of the mother's pouch for extra cuddling and petting. Returning it to mother isn't a problem. The babies scramble back, diving head-first into the pouch.

"They're like little Klingons," Paperd, 47, said. "They climb right back into the pouch, but because we handle them often, there's no separation anxiety or stress."

The Fall City Wallaby Ranch is one of 50 to 70 wallaby farms in the United States. As with most specialty hobbies, wallaby and kangaroo fanciers network and meet for conventions, sharing tips about care and breeding. No special permits or licenses are needed in Washington to raise wallabies.

The couple's wallaby collection started in 2001 when their son, Patrick, then 13, begged for a pet tarantula.

"We kept saying no," Paperd said. "We'd had a number of pets, but my wife didn't want a spider."

That Halloween, when they took their son and daughter trick-or-treating in downtown Fall City, the family noticed a small boy dressed as a ghost. He was crying.

"Teenage boys had snatched the boy's bag of treats," Paperd said. "When he heard the story, Patrick handed his bag of treats to the boy. What do you do when your son shows the traits you hope you've instilled? He got his tarantula."

Because Tawny Paperd wasn't smitten with the new pet, her husband looked for something warm and fuzzy — he calls it a peace kiss.

They searched the Internet for something different and picked wallabies over skunks. They visited Northwest wallaby farms and were won over by a baby wallaby. Their first purchase was Vicky, short for Victoria's Secret.

"Once you start raising wallaby babies, it's pure magic," he said. "They're so tame and loving."

The more the Paperds learned about the macropods — the scientific family name for wallabies and kangaroos — the more of them they wanted. Today their mob includes a male and female albino and two male, two neutered-male and four female Bennett Wallabies, a breed native to Tasmania.

The Paperds hug them like human babies. They don cloth pouches or slings to carry the infants around the house. They murmur baby talk. Rocky, their kangaroo, responds to "ba-ba" for bottle. He sleeps in the couple's room, usually in a pouch by their bed.

The adult female wallabies hop to Paperd when he enters their pens with a treat of cashews. The retired sales representative and businessman calls each critter loving nicknames — Velvet, Nessie, Sugar. The wallabies sell for $1,200 to $1,500. Albinos cost $2,500 to $3,000. Potential buyers aren't "customers"; they're called surrogate parents and undergo intensive screening.

"People can't come out here with a checkbook and expect to buy one. We pre-sell only to qualified surrogate parents." Paperd said. "Our babies are sold long before they're born."

Both the wallabies and the kangaroo need exercise and grazing space, even though their main diet is a commercial feed appropriately dubbed Happy Hopper. (Paperd describes it as "granola for kangaroos.")

What started as occasional visits to local classrooms expanded into one-, two- or three-hour educational programs the Paperds present at schools, nursing homes, private parties or camps. Rates start at $125.

"We became a business because we have to feed the animals," Paperd said. "But I'm a softy. We donate our services sometimes when groups can't afford to pay."

During one visit to a retirement home in West Seattle, a nearly blind woman in a wheelchair was rolled up to the front because she wanted to touch Apollo, an albino male. 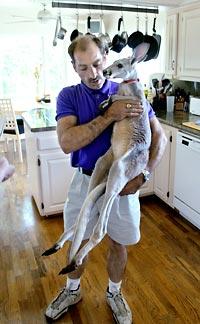 Rex Paperd holds his live-in baby kangaroo, Rocky, who essentially has the run of the Paperds' house in Fall City. They also love their wallabies, which they also treat as pets but are part of a business, too. (STEVE RINGMAN / THE SEATTLE TIMES)
Fall City Wallaby Ranch

At Railroad Days Wallabies from the Fall City Wallaby Ranch will be at Railroad Days in downtown Snoqualmie today, tomorrow and Sunday and at the Festival at Mount Si in North Bend Aug. 12-14, at Community Center Park, 400 S.E. Orchard Drive.

For information about tours and educational presentations, call 425-222-3819 or e-mail rexandtawny@ comcast.net