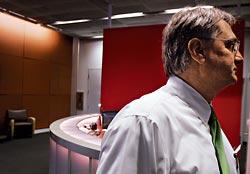 Cary Bozeman is rare in having been mayor of two very different cities. From 1976 to 1993 he served on the Bellevue City Council, which elected him to three terms as mayor. Bored with retirement, he moved to Bremerton in 1996 as executive director of the Olympic College Foundation, then in 2001 won election as Bremerton's mayor. There, he's helped initiate the biggest renovation of its downtown since World War II, including a hotel, conference center, parks and civic buildings. It's a remarkable comeback for a politician and a downtown. Bozeman strides the streets of his new city with enthusiasm, explaining how he's going to make lemons into lemonade.

Q: From Bellevue to Bremerton? Are you nuts?

Q: Didn't Bremerton voters find it weird to have an outsider from Bellevue run for mayor?

A: When I knocked on doors I got encouragement. Nothing had happened downtown for 35 years. People were ready to give somebody new a chance.

Q: What have you done differently to get this renaissance going?

A: You have to provide leadership. I didn't see downtown as a problem, I saw it as an opportunity. The community was using its waterfront to park cars. Wow! We bought all this waterfront land for $4 million. You can't even buy a waterfront home on the Eastside for $4 million.

A: There was no Starbucks. I couldn't believe it. They said they didn't think there was a market. What, blue-collar people don't drink coffee? Now there's a Starbucks, and it's doing great. I think the state's emerging cities are the ones this size — Wenatchee, Bremerton, Olympia, Anacortes.

Q: How do you court developers?

A: We've got an economic-development director who represents all the departments, who works with the council. You can go to one guy and get an answer.

A: People who want a waterfront home near galleries and theater who can also hop on a passenger ferry next door and be in downtown Seattle in 30 minutes.

A: You've got 8,000 workers in the shipyard averaging $65,000 in pay and benefits. Some of the most sophisticated work in the world is going on here. This is another Boeing — people who are well-educated and high-paid. Now our challenge is to diversify.

Q: What would you tell other mayors?

A: I believe that nothing stands still. You either go backwards or forwards.