It has preserved on its 54 acres the low-tech look, the grounded, rooted look of a guild of artisans.

There's a long drive past residences and farms. The road to the campus leads through the Pilchuck Tree Farm, past campus operations director John Reed's house, past instructors' cottages with windows tilted open for fresh air, past a pond, with signage in glass letters.

At the center of the school is the hot shop, where taffy-molten glass at 2,000 degrees is gathered from furnaces to be blown, shaped, pinched, rolled and spun. Nearby is the flat shop, where people work on glass projects in flame-working, neon, stained glass and mosaics. There's a kiln casting studio, a hot-casting shop, a print shop and a cold shop, where engraving, sandblasting, grinding and polishing take place.

Students live in cottages or a dorm and meet for dinner in the lodge, a two-story log building with valley and saltwater views.

"It hasn't changed that much since that back-to-nature, back-to-earth kind of hippie time when it was started," said Pike Powers, who came to Pilchuck in 1978 as a teaching assistant to Bertil Vallien and Jamie Carpenter. For 12 years, Powers has been the school's artistic director, sharing the job this year with Ruth King.

Over the years, the leadership has recognized that that quality was worth preserving.

Pilchuck could have one of the biggest outdoor glass-sculpture parks in the world, but its grounds are deliberately sparse.

"Dale Chihuly selected this site, which was nothing but an open meadow with no structure, no running water, no electricity," said Erin Moore, Pilchuck's grant writer and communications coordinator. "In order to allow the artists even 30 or 40 years later to have the same kind of experience, to do similar kind of work, they have to be able to react to the place and not to sculptures of other people who have been there before."

With Pilchuck kept simple, Moore said, "every session that comes in, every generation of artists who come through, get to react to it in their own way."

Though world-famous as a campus and artist-centered community, Pilchuck also could be called one of Snohomish County's best-kept secrets. It's open only once a year to the public.

There's an administrative office in Seattle, but all the work of the school occurs at what Moore called "this incredible rural oasis" east of Stanwood.

"I was amazed at how it was such an inviting, gracious environment to come back to," said Jeremy Popelka, a 20-year veteran of Pilchuck who has returned from Wisconsin to teach a sand-casting class.

"As an artist, you have to kind of remember what it was like to be young and kind of naive, and come back with that kind of wisdom and to really appreciate it more than you did then," he said.

Each summer, there are five 17-day sessions offering five courses from which to choose. Planned as the equivalent of a semester's worth of college-level classes, the sessions offer intense exposure to other artists and teachers. Even downtime is spent together: student auctions, meals, nightly slide shows and glass talks.

At night, all of the studios are open.

Artist Judy Chicago spent a residency at Pilchuck in 2003, painting enamel on glass and learning how to etch and engrave glass. She was "a very structured woman, very careful about how she spent her time," Powers said.

"She came out of the city at rip-roaring speed. She had a great time; she talked to a lot of artists; she had a little cocktail party in her studio residence and invited a number of guests and talked about her work," Powers added.

The fluidity of boundaries and the intensity of the study have sent hundreds of students into artistic careers. One is frequent winter resident-artist William Morris, whose work has been seen at museums and galleries around the world and who has a show now at the Museum of Glass in Tacoma.

"All you have to do is look around in Everett and in Marysville and in Snohomish. Look at stained-glass windows, look at public art installations, look at the Everett Events Center and the Snohomish County Arts Council, and you will see the presence of glass," Moore said.

Stan Price spent summers at Pilchuck from 1974 to 1979, first as a student, later as a teaching assistant and caretaker. In fall 1979, he and wife, Colleen, established Covenant Art Glass, a stained-glass store in Everett.

"We were living up there," he said of the glass school. "When we were there, you lived in a tent, you ate, slept glass 24 hours a day, and it was mesmerizing and exciting. Then you tried to find out how to do it for a living."

Artists drove to Seattle for supplies, so Price decided to see whether a glass-supply center would succeed in Snohomish County. Now, Covenant offers supplies, classes and workshops to more than 100 students a year, as well as to professional artists.

"Pilchuck has brought a lot of talented artists to the Puget Sound region," Price said. "The region has become the Murano [Italy] of contemporary glass blowing because of Pilchuck. As people moved there, there was a support system — artists sharing equipment and ideas and materials."

The region's cloudy, temperate climate, with temperatures most often no higher than the 60s or 70s, is also one of the best for working in glass.

"We have annual use of the shop," Powers said. "It's nice to have sunlight, but it's a killer in July and August when it gets over 80 degrees here."

"There's always an instructor, a staff member, a teaching assistant, a ratio of support staff, from the educators to the people who help keep the grounds up. A student comes here, and they're going to get a lot of information from numerous sources very quickly," Powers said. "Teamwork is essential to learning how to work in glass."

Rachel Kaster, a student of glass casting, said, "As much as I've been working all night, every night, it's very much a vacation because it's such a beautiful surrounding here."

Though Pilchuck is an international school — among 250 students this summer, 31 nations are represented — it draws many of its students and artists from Seattle, as well as Snohomish, Island and Skagit counties.

"I think that Pilchuck has brought a lot of glass people out here," said Marc Boutté, a Louisiana native who owns a glass studio on Camano Island. "It brought me back out here, and it feeds glass people's souls. There's no other place like it. The three years that I worked there were very good years for me. They gave me the confidence to keep on pursuing my dream."

After Sept. 3, when the last summer session ends, the campus won't fold up and become Brigadoon, though for a week the staff will a well-needed breather.

For eight weeks in the fall, six young artists are there as emerging artists-in-residence, Moore said. There are professional artist residencies in fall, winter and early spring.

To aid some artists there is also a Hauberg Fellowship, which bears the names of Anne Gould Hauberg and her former husband, the late John Hauberg, who founded the school with Chihuly in 1971.

"It's amazing," she said. "They stayed creative. It's locked in there and has never left." 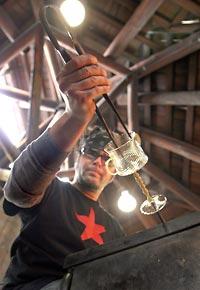 Artist Jim Mongrain, an instructor at Pilchuck Glass School, finishes one of his glass-and-gold-leaf Venetian goblets in the hot shop as students watch from the sidelines. (STEVE RINGMAN / THE SEATTLE TIMES) 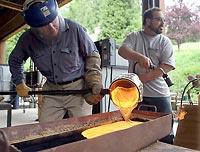 Artist and instructor Jeremy Popelka ladles molten glass over a sand form for a hot casting as student Joe Freia of Mukilteo readies to heat surface bubbles with a torch. (STEVE RINGMAN / THE SEATTLE TIMES)

Admission: $20 (free for children under 13); by reservation only.

The Pilchuck Society consists of annual donors whose contributions support the school's education and artistic programs. For more information on supporting the school, call 206-621-8422, ext. 27.

Pilchuck Glass School's annual dinner and glass auction will begin at 5 p.m. Oct. 21 at the Westin Seattle hotel. Proceeds will go to support school programs. Tickets start at $200; reserve them by calling 206-621-8422, ext. 44.

The Bellevue Arts Museum, 519 Bellevue Way N.E., has a revolving exhibition of art from Pilchuck. The first exhibit of 75 early works from Dale Chihuly and other noted artists is titled "Taking Shape: Pilchuck Glass School in the '70s." Information: www.bellevueart.org.