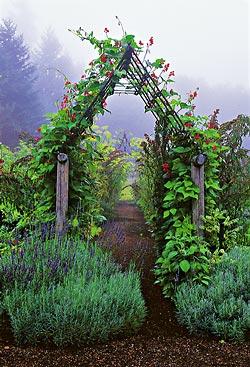 Scarlet Emperor beans climb up the wood and metal entry arbor crafted by Sue Skelly. Clumps of lavender grow at its feet.
By Valerie Easton

NOT CONTENT WITH thousands of square feet of extravagantly decorative edibles, Nancy Heckler figured out a way to grow pumpkins vertically. She's made a "pumpkin cake," a spiral measuring 12 feet across at ground level and formed of matte-black corrugated roofing material. "I love to grow pumpkins, but they can take over," explains Heckler of her tiered creation draped in pumpkin vines.

Heckler's vast vegetable garden is testament to soil improvement and thoughtful plant choice, as well as an astounding amount of hard work. Organic, productive and drop-dead gorgeous, this luxuriant array of edibles and flowers covers more ground than the entire city lot in Seattle that she and husband Terry sold 13 years ago to move to the country. "I always wanted a little farm," says Heckler of the waterfront acreage on Hood Canal called Oyster Point Gardens. Here, Heckler grows 140 cultivars of vegetables and fruits on what used to be a weed-choked field.

Because the garden's original soil was sandy, Heckler began by spending a couple of seasons enriching it with 40 yards of compost, and tilling in a succession of vetch and clover cover crops. Two years ago, she let the garden lie fallow to rest the soil and break the cycle of pests, an important technique in this all-organic garden. "But I felt hungry that year," she laments. "I missed all the fresh stuff and hated going to the grocery store." With the garden again in full productivity, Heckler grazes on berries and peas right off the vine when she and border collie Niki patrol early each morning for slugs, disease and other pests.

Pass beneath local artisan Sue Skelly's rustic arbor and be swallowed up in the sheer scale of the plantings. Growing 5,000 square feet of edibles allows Heckler to create stunning visual effects with swathes of lettuce leaves, patches of her favorite strawberry, 'Tristar,' and rows of colorful 'Bright Lights' chard. Lusty manure-fed dahlias tower over the vegetables, and the paddle-shaped leaves of hardy bananas (Musa velutina) add an air of exotica. Sunflowers, sweet-smelling nicotiana and velvety burgundy amaranth mingle with feathery bronze fennel and purple kale in a rule-breaking mix of great visual impact.

The garden's blowsy beauty is enhanced by plants left to go to seed, like the ferny fluffs of asparagus and fennel, and the tumbled masses of red- and gold-tinged orach.

Learning from eggplant that rarely ripened and a 30-foot row of peanuts that produced three nuts, Heckler narrowed her palette to what thrives in the cool Northwest. One year she grew 18 different squashes, another a variety of potatoes culminating in a taste-off to determine which to grow next year. This season is all about brilliant color; Heckler has planted two long rows of chard, plus cauliflower in tones of orange, purple, lime and citrus.

Heckler's gardening year lasts a full nine months, beginning in February when she starts tomato, corn, pumpkin and broccoli seeds in a heated greenhouse. When the misty days of autumn end with the first killing frost, Heckler cuts down the dahlias and puts the garden to bed, if only for a couple of months.

In her own words, here are Nancy Heckler's favorites, and where she gets them.

Broccoli: Every year, 'Packman' from Territorial Seed does the best.

Kale: I can never get enough of the purple variety called 'Redbor,' and I'm liking the equally curly green version 'Winterbor,' both from Territorial Seed.

Lettuce: 'Galactic' from Johnny's Seed is by far the best dark red.

Pepper: 'Bulgarian Carrot' from Territorial Seed is the hottest pepper that I've ever been able to grow in our temperate climate.

Pumpkins: 'Kakai' from Johnny's Seed starts as a tapestry of greens and slowly becomes beautifully woven with orange. I will always grow 'Rouge Vif d'Etampes' and 'Fairytale,' both from Territorial Seed.

Summer Squash: My newest obsession is a pattypan-type called 'West Sunrise Lemon Scallop,' which has a wonderful flavor with great texture, from Ornamental Edibles. 'Flying Saucer' from Osborne International is also a must.

Sweet Corn: 'Sugar Buns' from Territorial Seed will always produce, no matter what our summer brings.

Swiss Chard: The best this year were 'Bright Yellow' and 'Pink Passion,' both from Johnny's Seed, 'Orange Fantasia' and 'Pink Lipstick' from Ornamentaledibles.com, plus 'Oriole' from Seed Saver's Exchange.

Valerie Easton is a Seattle freelance writer and contributing editor for Horticulture magazine. Her e-mail address is valeaston@comcast.net. 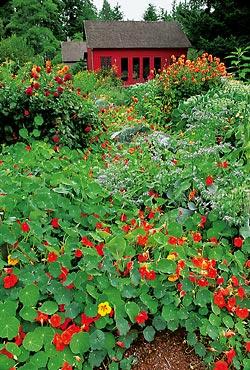 Terry Hecklers art studio opens out to 5,000 square feet of vegetables and flowers, including a flush of nasturtiums and stands of dahlias. (NANCY HECKLER) 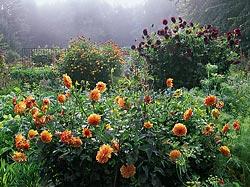 Dahlias grow lustily in the rich soil of the vegetable garden. The golden orange dahlia in the foreground is Sheyn and the dark red one in back is Rip City. 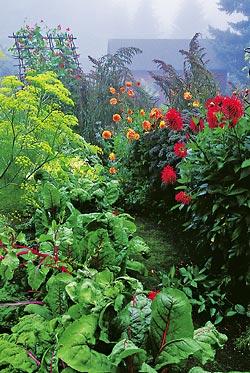 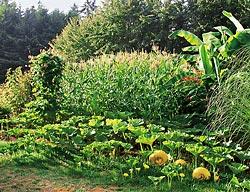 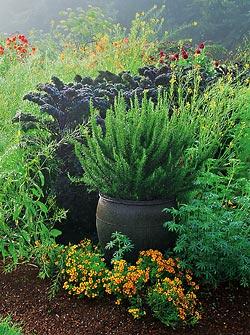 A pot of rosemary flourishes in front of deep purple Redbor kale. Tangerine Gem marigolds bloom at the base of the pot.