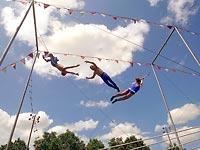 The volunteer Wenatchee Youth Circus usually has about 40 to 50 members a year. Above, members of the troupe perform at the Renton River Days festival. (THOMAS JAMES HURST / THE SEATTLE TIMES)
By Diane Wright
Times Snohomish County Bureau

It's OK to run away with the Wenatchee Youth Circus — but you might have to bring your parents.

For 53 years, the circus has traveled from Anchorage to El Paso, Texas, from San Diego to Fort Collins, Colo., and all states in between — plus Canada — for 70 to 90 performances a year. Over the years, an estimated 2 million people have seen "the Biggest Little Circus in the World."

Next week, the circus will present three shows at the Edmonds Civic Center play field. At $3.50 to $5 per ticket, it's not the big-budget extravaganza of the Ringling Bros. and Barnum & Bailey Circus or the Cirque du Soleil, although like the latter, the Wenatchee circus uses only human performers.

In the 1960s, he said, the circus decided it was too hard to keep and care for those animals, but it retained "the most dangerous animal of all, and that's teenagers."

"Basically, circuses are family entertainment, and most are within family budgets," he said. "There are acts of daring, thrilling acts, posing acts and acts that will make you laugh."

That includes Pugh, who is the circus's lead clown, Guppo.

Though the Wenatchee Youth Circus is not a circus school per se, all winter it trains and practices for the summer performing season.

So what's a circus baby do?

"It depends on their capabilities," Pugh said. "Lots of little kids are not afraid of heights — you'll put a little kid on someone's shoulders. Or he or she will be a clown."

"It just depends on the child's maturity level," he said.

Running off and joining the circus is easy, but if kids are 12 or under, their parents have to come, too.

"We take anybody who's interested," Pugh said. "... If a child wants to join the circus, we'll have a place for them if they have their parents' permission."

If they're over 12, kids can come on their own, "but we invite parents to join them because it's a family experience." That's also where the circus gets people for the cook shack, the truck drivers and the chaperones.

The circus charges $20 to $25 a year for a membership, though people have to have their own insurance. The troupe usually has about 40 to 50 members a year, and performers work as volunteers.

"They sleep in sleeping bags, and there's a girls dressing tent and a boys dressing tent, and some of the chaperones sleep in the wagons to help secure the lots," Pugh said.

The circus has had youths from Oregon, Seattle, Orcas Island and even from Australia join them for a summer, though most come from north-central Washington.

Typically, during the rehearsal season, they practice two to three times a week with Pugh and his assistants in Wenatchee, learning high-wire walking, tumbling and other acrobatics. Some stunts can be taught in a day.

The circus asks out-of-town kids to come to Wenatchee for at least one or two training visits during the school year, during their vacations. Then they commit to a series of weeks in the summer, traveling to events like Renton River Days or the Tastin' n Racin' Festival on Lake Sammamish. Early on, Pugh said, "we knew we had to move around and take our show on the road."

They've done that for 15 years in Edmonds, arriving in campers, RVs and cars, hauling 8- by 10-foot miniature circus wagons that open out as bandstands, dressing rooms and sleeping tents.

In front of the grandstand, they pitch a 30-foot-high trapeze, a 35-foot-high tightrope, swinging ladders, trampolines and other equipment for the circus' 85- minute shows. One crowd-pleaser is a seesaw act in which acrobats send each other flying.

Babst started with the youth circus when he was a young boy and went on to become a professional circus entertainer with his wife, Julie, in their college years. Now 50, he rejoined the youth circus in 2002 as an assistant director. He lauds the mastery and accomplishment the circus engenders in young people.

"The kids are encouraged to take ownership of what they're doing," he said. "... It's a good life lesson. You deal with positive and negative situations. I started out as a clown when I was 8 and had a blast doing that, but I saw [older] kids doing trampoline and tumbling and flying trapeze [and decided to become an acrobat]. Once you're entrenched in it, you never forget it."

Safety is the No. 1 issue for the circus, Babst said, "in setting up, tearing down, performing and practicing."

Last year, the circus had the only death in its history: Shawn Thomas, an 18-year-old from Wenatchee who had been with the circus since he was 7. According to an Associated Press report, he had been helping set up the circus in Mattawa, Grant County, and was guiding a wagon off a flatbed truck when the wagon rolled over him.

It was a blow for the circus, which Pugh had established as an after-school tumbling program in 1952, when he taught junior-high school.

"I've had great support from parents, and now I have two wonderful assistants, with my oldest son to take it along when I'm through," said Pugh, 78.

"But I've got a few good years left."

The nonprofit circus is self-supporting, operating largely without grants but with local sponsors such as the Edmonds Exchange Club.

The Edmonds chapter is handling logistics for the circus's visit to Edmonds, selling tickets, doing publicity and working with the Edmonds Parks and Recreation Department at the site. The Exchange Club, part of a national service group dedicated to preventing child abuse, uses the circus as a community-service event.

"It's not a big moneymaker, but it's something we give back to the community," said Bob Jamieson, a past president. "We do have all the noises of the circus — the tents, the clown costumes, the makeup, many of the things you'd see at Ringling — but at a smaller scale. ... It's big, but yet it's also small."