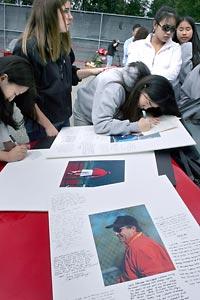 Seattle police questioned and released a 17-year-old boy an hour before he is suspected of killing a popular Eastside high-school tennis coach in an apparently random slaying.

The teen, Samson Berhe, and a friend were questioned Sunday about a burglary just west of the shooting scene, Seattle police spokesman Rich Pruitt said. He said officers arrested the friend and released Berhe. Police later learned Berhe was wanted on a juvenile arrest warrant.

During the interaction with police, Berhe dropped some shotgun shells on the street, according to a police report.

Berhe allegedly shot Mike Robb, 46, once in the face with a shotgun as Robb was driving home from the Fauntleroy Island ferry terminal along West Marginal Way Southwest just after 7 p.m.

Police said they were unsure what led to the shooting and how Robb interacted with Berhe, but friends of the victim said they thought he may have stopped to assist the teen.

Berhe, who was charged in 2002 with taking a motor vehicle without permission and attempting to elude police, failed to appear in court on those charges and a judge issued a warrant for his arrest. Seattle police would not comment yesterday on why Berhe wasn't arrested on the warrant when officers questioned him Sunday.

Police sources said the officer who questioned Berhe may not have known there was a warrant for him, since juvenile warrants aren't typically entered into the same database as adult warrants. In addition, the officer would have had to call King County Youth Services to verify the existence of a valid warrant. It was unknown last night whether the officer made the call.

King County prosecutors' spokesman Dan Donohoe said Berhe — who will turn 18 tomorrow, the same day funeral services are planned for Robb — will be charged in adult court. It is unclear whether he is likely to face a first-degree or second-degree murder charge.

The Seattle Times, which generally does not name juvenile suspects, is naming Berhe because of the plans to charge him as an adult.

At Berhe's first court appearance yesterday, deputy prosecutor Mary Barbosa said police have not found anything to connect Robb with the suspect. During his brief appearance, the teen shouted and demanded to represent himself before being removed from the courtroom.

According to court papers, Berhe's family is cooperating with police. They showed detectives a tree that he had used for target practice last week and spoke of their fear of him, the documents say. The teen apparently spoke to his parents and siblings of his intention to "go kill someone," the papers say.

Chief Juvenile Court Judge Patricia Clark found sufficient reason to keep Berhe in custody. In addition, the judge set an arraignment for next month on the two charges from 2002.

After searching overnight, Seattle police found the 17-year-old Monday on a barge in the middle of the Duwamish River, not far from where Robb was shot. Berhe, who matched witnesses' descriptions of the shooter, was initially questioned and arrested on a trespassing charge. He was later booked into the King County Juvenile Detention Center on investigation of homicide after, police say, a witness identified him from a photo montage.

Robb was a popular tennis coach at Newport High School in Bellevue and a nationally-known tennis umpire who made three trips to the U.S. Open. He was shot two miles from the West Seattle home he shared with his wife, Elsa, and 1-year-old daughter, Louisa.

Dozens of Robb's students and colleagues gathered near Newport High's tennis courts yesterday and crafted a memorial out of tennis balls, flowers and balloons. Last year, Robb coached the girls varsity team to second place and helped coach the boys team to first in the KingCo 3A Conference.

Jason Moseby and Garren Azama, seniors and co-captains of the boys varsity tennis team, said they couldn't fathom what could motivate someone to kill their coach.

"He inspired all of us on and off the court," Moseby said. "He had a smile everybody loved."

Newport was like family to Robb, said Principal Patty Siegwarth. For the past three years he coached tennis; Elsa taught French there; and their daughter was enrolled in the school's infant child-care center. In April, the Robbs served as chaperones on a class trip to France.

Robb was voted official of the year for 2004 by his peers in the Northwest section of the United States Tennis Association (USTA). A line judge at the U.S. Open in Flushing Meadow, N.Y., for the past three years, Robb was recently selected to train as "a white badge," an umpire who officiates professional matches from a chair next to center court, said John Rodenberg, chairman of the USTA's officials committee.

Though he loved the game, Robb was just as comfortable in fleece and sandals as he was in tennis whites, said longtime friend Ben Lynch. Robb always had several projects in the works and recently finished renovating a 1912 shack that sits on old orchard lands in West Seattle.

Lynch choked back tears while talking about the friend he was supposed to accompany to the Olympic Peninsula on Sunday. Robb e-mailed Lynch Friday night and called off the trip, but ended up going anyway. Robb was returning from the trip when he was shot.

"I just know if I was in that car with him, something different would've happened," Lynch said. "We would have stayed longer on the property or maybe I would have seen this guy and said, 'Oh, he looks kind of shady.' "

Robb had spent years searching for the perfect Northwest vacation property, a place where he and his family could spend weekends kayaking and sailing and he could entertain his many friends.

He finally found two acres with a view of the Hood Canal and a ramshackle cabin that he planned to renovate himself, Lynch said. He went out to the property for a last look on Sunday and was to sign the papers finalizing his purchase the next day.

"If I was stuck on Mount Rainier hanging off a cliff, he would've sacrificed his life to save mine," Lynch said. "He's probably the closest friend I've ever had."

Robb was born in Beverly, Mass., the second of four children. After graduating from the University of Massachusetts in Amherst in 1982, Robb lived in Florida for several years studying architecture and drafting. An outdoorsman who loved mountain climbing and kayaking, Robb moved to Seattle in 1990.

"He was a jack-of-all-trades," said Billi-Jo Dunning, who used to partner with Robb for doubles tennis. He managed apartments, painted houses and worked for a custom design company doing carpentry and metal work, friends and family said. With his father and brother, he invested in Florida real estate. He also bought property here.

"Mike was very fair," Dunning said. "There's a lot of people in tennis for whom it's all about the winning and they don't hesitate to cheat. He was all about having a good match and it didn't matter if he won or lost."

In addition to his wife and daughter, Robb is survived by his parents, Cordelia McCuaig and Bayard Robb, and brother Ren Robb, all of Vero Beach, Fla.; sister Lee Robb of New York, N.Y.; and sister Linda Boardman of Yarmouth, Maine.

A private service is planned for tomorrow. In lieu of flowers, the family asks that donations be made at any Washington Mutual branch to the Louisa Robb Education Fund.