Ulrich Pakker's "Trivergence," above, outside the Everett Events Center, is part of the city's public-art display, as are the works at left and right. (ELLEN M. BANNER / THE SEATTLE TIMES)
By Tina Potterf
Special to The Seattle Times

Wendy Becker may not be a household name, but if you've spent an evening watching a movie under a starry sky at Silver Lake or an afternoon perusing the decidedly non-garden-variety garden art at Everett's American Legion Memorial Park, you know her work.

Ditto if you've set aside an evening to soak up the summer sun and live jazz or reggae on the Everett waterfront.

As the cultural-arts coordinator for Everett Parks and Recreation, Becker is the creative mind behind three of the city's most popular cultural events: Cinema Under the Stars, Sorticulture and the Waterfront Concert Series. Additionally, she oversees a public-art program and is a liaison to the Everett Cultural Commission.

Promoting Everett's arts scene — and its visual and performance artists — and cultivating an atmosphere of creative expression are among Becker's passions and all in a day's work. She's been with the parks department for eight years, starting as a seasonal employee in 1997 and becoming a full-time staffer in 2001.

Through arts programming and, most recently, public art dotting downtown, perceptions of Everett as a place without a distinctive arts scene are changing. Many credit Becker with the turn in opinion.

"I feel like the city has always been on the cusp of change," she said. "We've had an arts community, but I don't think people look to Everett as a cultural-arts place."

Initially, Becker, 35, joined the parks department to assist in special-events planning, such as the Music in the Parks program. Within her first year, she created Cinema Under the Stars, the Waterfront Concert Series and Sorticulture, a festival of art and horticulture.

A simple philosophy underpins the genesis of each:

For Becker, adding dimension to the local arts scene with events that are all-ages-friendly and affordable (most are free) is more than a vocation. In many ways, it's about giving back to a community that is home to Becker, who resides in South Everett with her son, Aidan, and husband, Terry, a Snohomish County sheriff's deputy.

Many people in Everett came to know Becker in the mid-1990s as the owner of a hip coffeehouse, the Tropic of Cancer, on Hewitt Avenue. With funky, oversize chairs and couches, a host of specialty teas and open-mike nights for amateur poets and troubadours, the Tropic fast became a hangout for teens, writers, musicians, professionals and people in between. When the Tropic was shuttered after three years, Becker turned her talents to events planning.

It was 12 years ago when Elizabeth Smith met Becker at the coffee shop during a visit to downtown Everett. The Tropic was what Smith, now the gallery manager for the Arts Council of Snohomish County, recalled as "an oasis of color, sound and smell that was a total sensory delight."

Like many, Smith was disheartened when the Tropic closed but elated when the city brought Becker on board to promote the arts.

"Wendy has not just added dimension to the arts scene here," Smith said via e-mail, "but I consider her part of the foundation. Through her perseverance, she has initiated a lot of what this town has to offer."

For Becker, the career change wasn't a huge departure from what she had done at the coffeehouse. Though not serving lattes and spiced tea, she was still booking musicians and working with vendors. Her connections with musicians proved invaluable when she launched the Waterfront Concert Series in 1998.

The first season got off to a slow start, however, as Becker learned quickly that not everyone shared her passion for all things jazz.

"There were many empty seats," she recalled. That changed "when I started to really pay attention to the city, the residents and their tastes," and booked a mix of genres, including reggae, rockabilly, pop and funk.

A keen sense of what people want — coupled with her own likes — drives Becker to bring programs into the fold. Take Sorticulture, which began somewhat serendipitously when Becker came across a piece of garden art that she thought others should experience. Cinema Under the Stars came about when Becker and colleagues were scouting locations at Silver Lake and she offered, "We should show movies out here."

Though ideas for programs begin with a pitch, they must get the official stamp of approval from the Mayor's Office before moving ahead. Becker praised the city for affording her opportunities to explore and implement arts programs.

"The vision was cultivated by me," she said, "but the city allowed me to use my imagination to come up with arts and cultural events to benefit the city. I am lucky that I work for someone who allows me to take chances."

Ardell Brandenburg, the recreation superintendent for Everett Parks and Recreation, remembers when Becker first came to the department and brought along her infectious energy, a penchant for planning and a cache of ideas.

"Wendy just has such great energy and ideas, and is really always looking for new programs and new ways to serve the citizens of Everett and visitors to our city," Brandenburg said. "She has created some of our most successful events that are still running."

Though Becker continues to play a role in the planning and coordination of Sorticulture, the waterfront concerts and Cinema Under the Stars, assistant Trish Davies handles many of the details these days. Becker oversees other projects, including the city's public-art display, a passion she fought hard for.

More than two years ago, Becker proposed public art — promoted as an art walk — to add vibrancy to downtown. Art is good for business, Becker reasoned, as it has the potential to lure people downtown, who in turn will spend money at downtown restaurants and shops. But unlike her previous proposals to enhance cultural arts in Everett, the notion of a sculpture exhibit was a hard sell.

Then in 2003, with a new mayor, Ray Stephanson, and a new administration, Becker got the go-ahead for the project.

"I don't know for sure why there was resistance initially," she said. "I do know that now, the Downtown Sculpture Exhibit is used as a key selling point for new development and to generate outside interest in the Everett community."

The reception from the public was immediate.

"We started out exhibiting one piece, then the community came forward and said, 'We want more of this,' " Becker said.

The sculpture exhibit consists of 13 pieces — four works are permanent, and nine are rotated throughout the year — that are part of the city's larger public-art collection. The display is supported by donations.

The works of such artists as Reg Akright ("Heart of Stone"), Heather Cole ("Compassion") and Jan Uchitil ("Love") elicit a range of reactions and achieve the mission of getting people talking.

"I love it when I catch people walking by and you can tell they don't like it, but at least they looked at it," Becker said. "They touched it and talked about it.

"These are their landmarks now. People are recognizing art as part of their landscape. I couldn't be more gratified."

Making connections with people, those who stop her at events or on the street to talk about an unforgettable piece at Sorticulture or to share an experience with their family at Cinema Under the Stars, is one of the perks of a job that Becker looks forward to every day.

"My job is so much fun — it's so pleasurable that it never seems like work," she said. "I have the best job in the world." 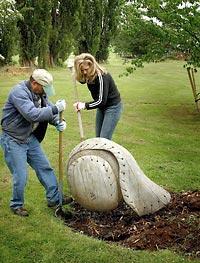 Kim Hammond, left, and Wendy Becker dig up a sculpture by artist Pat McVay that is being removed from Evergreen Arboretum and Gardens in Everett after a yearlong loan to the city.

"Circle of Life" is by Shirley Erickson. (ELLEN M. BANNER / THE SEATTLE TIMES) 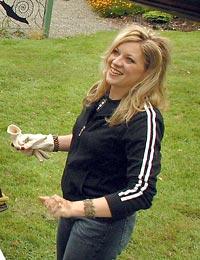 Wendy Becker oversees the Everett Parks and Recreation Department's cultural-arts programs, including a public-art display, a passion she fought hard for. Art is good for business, she says, because it has the potential to lure people downtown. (ELLEN M. BANNER / THE SEATTLE TIMES) 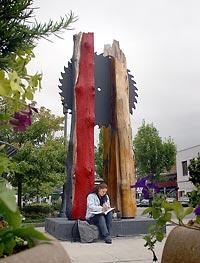 "Clarity," a stainless-steel-and-glass sculpture by Merrilee Moore, rests in the Evergreen Arboretum and Gardens within American Legion Memorial Park. The arboretum will be the site of the Sorticulture garden-art show from 4 to 9 p.m. Friday and 10 a.m. to 6 p.m. Saturday. (ELLEN M. BANNER / THE SEATTLE TIMES)