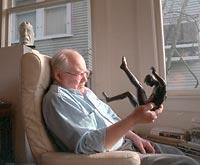 Everett DuPen, with his bronze "Falling Man." At left is "Prometheus." Mr. DuPen taught at UW from 1945 to 1982. (ALAN BERNER / THE SEATTLE TIMES, 1994)
By Diane Wright
Seattle Times staff reporter

He counseled bronze artist Georgia Gerber to ignore the pressure to do abstracts at school and pursue her path of realistic sculpture.

Everett DuPen saw the essence of his students.

He joined the faculty of the University of Washington in 1945 and taught there until retirement in 1982, chairing the sculpture division at the end of his career. Even then, as professor emeritus, he held class every Wednesday night for a group of students who still meet in the area, wryly calling themselves the "DuPen Academy of Sculpture."

"He was hugely dedicated to his students," said his oldest daughter, Destia DuPen Hermes of Redmond.

Mr. DuPen, 92, died of congestive heart failure May 25 at Ivanhoe Senior Care in Bellevue, where Charlotte, his wife of 65 years, continues to live.

"Mother became so attached to each piece, she didn't want him to sell it. Consequently, there's a great deal," said Hermes, who has been archiving her father's work for six years.

"I have a 5-foot pile of sketchbooks. He'd go from one sketchbook to the next. I have many, many clay maquettes, maybe 3, 4 inches high. He'd use them for ideas for stone or wood carvings."

Growing up with an artist-father meant being raised with sculptures, Hermes said. "There was sculpture everywhere," she said. "At one point, there were 50 or 60 pieces in our living room. They were on the piano, on the floor, on chairs — we kind of walked around them."

Mr. DuPen was influenced by the classic masters: Rodin and Michelangelo, as well as Swedish-American artist Carl Milles.

Born in Chico, Calif., in 1912, Mr. DuPen studied architecture and sculpture at the University of Southern California and graduated with a bachelor's degree in sculpture from Yale University in 1937. He taught at Carnegie Institute of Technology in Pittsburgh and at Washington University in St. Louis, and during the war years worked as a marine draftsman for Sausalito Shipbuilding in California before joining the UW art faculty.

Mr. DuPen's work appeared in the St. Louis Art Museum, the Seattle Art Museum, the Henry Art Gallery, the Frye Art Museum, and in exhibitions from San Francisco to New York. He was a fellow of the New York-based National Sculpture Society and had been on the board of the Northwest Stone Sculptors Association.

Mr. DuPen did dozens of public commissions at churches, libraries and at the UW, including a bust of former university President Charles Odegaard at the Odegaard Undergraduate Library.

At Seattle Center, his "Tree of Life" sculpture still stands in the DuPen Fountain at the north side of KeyArena, in the lower courtyard of the Northwest Rooms. Built in 1962 for the Seattle World's Fair, it is a celebration of nature and man and is used as a gathering place by lunch crowds and festival-goers.

Mr. DuPen's memorial service will be held in a church where three of his works were commissioned.

"The work he did here was magnificent," said the Rev. Peter DeVeau, rector of St. John the Baptist Episcopal Church in West Seattle.

"He could unlock the lines that were part of a medium, whether it be metal or plaster or wood, then communicate something that was always present but for whatever reason we hadn't sensed it yet," DeVeau said. "I believe he answered a call in his life to use his talents to communicate timeless ideas."

The day before he died, Mr. DuPen talked to each of his children, either in person or by phone, Hermes said.

"What he kept saying to all of us was, 'Stay together, stay together. There's nothing more important than love.' "

At that time, his daughter also asked him, "Is there any message for your students?"

"He said, 'Let the spirit come through to your work,' " said Hermes. "He felt that very strongly. Structure was important, the knowledge of the material and the technique, but it was nothing without your own feelings and your emotions coming through it."

Besides his wife and Hermes, Mr. DuPen is survived by daughters Novelle DuPen-Meyerhoff of Boston and Marguerite Day of Vail, Colo.; sons Stuart L. DuPen of Bainbridge Island and William E. DuPen of Vancouver, Wash.; 11 grandchildren; and six great-grandchildren.