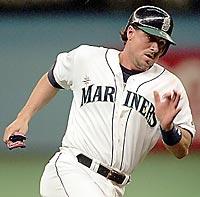 High-school rewind: Blowers was a three-year starter at shortstop. He was an All-South Puget Sound League and all-state selection his senior year, leading the Braves to the state tournament.

After high school: After two years at Tacoma Community College (1984-85), Blowers played for one season at Washington (1986), where he won the Pac-10 North triple crown.

The 6-foot-2 right-hander was primarily a third baseman during his 11-year major-league career (1989-99) with four franchises that included three stints with the Mariners. He had a career year with Seattle in 1995, hitting 23 home runs and driving in 96 runs.

After athletics: Blowers has been a pregame and postgame radio analyst for the M's since 2001.

Going into the remarkable 1995 season, Blowers had a good feeling about the team.

"It was one of those things where we had a great group of guys that had already been in Seattle," he said.

Despite the struggles of the current Mariners team, Blowers remains optimistic.

"I don't think that there's any doubt that this is a team in transition," he said. "They lost 99 games last year. That was a surprise to everybody. With the signing of Richie Sexson and Adrian Beltre, there were some expectations. I think as the summer wears on and Richie and Adrian get going, this club will be better."