Jason Sprinkle became known in 1993 when he and his cohorts clamped a 700-pound ball and chain around the leg of the towering Jonathan Borofsky sculpture "Hammering Man." (BARRY WONG / THE SEATTLE TIMES, 1993)
By Sheila Farr
Seattle Times art critic

Jason Sprinkle, the artist who paralyzed downtown Seattle in 1996 when an art event he initiated turned into a rush-hour bomb scare, died May 16 in Long Beach, Miss., where he had been visiting his aunt and looking for work.

Mr. Sprinkle, 35, was hit by a freight train. There were no witnesses, and it is not certain how or why he was struck.

Friends and family described the young man as brilliant, even a genius.

"He was really gifted," said Karina Sprinkle, the wife of a cousin. "But he always had a hard time keeping a job because of his mental health."

In his early 20s, working under the moniker Subculture Joe, Mr. Sprinkle made headlines in Seattle staging guerrilla art events to rally attention to his idealistic personal and social concerns.

As founding member of a group of local artists known as Fabricators of the Attachment (FA), Mr. Sprinkle burst onto the scene in 1993 when he and his cohorts clamped a 700-pound ball and chain around the leg of the towering Jonathan Borofsky sculpture "Hammering Man" at the First Avenue entrance to the Seattle Art Museum. The piece, padded so it wouldn't damage the sculpture, was intended as a Labor Day commentary on the oppression of working people.

Such an act made Mr. Sprinkle something of a hero in part of the arts community. The next year, FA members surreptitiously installed a 14-foot black heart in Westlake Mall as a Valentine's Day art event, said artist, family friend and FA member Art Donnelly.

"It was really just a fun piece," said Donnelly, who is still amazed that they were able to pull off those installations without serious reprimand.

Mr. Sprinkle was born Nov. 6, 1969, in Fullerton, Calif., and raised in Seattle, where he attended school until he was 16, said his mother, Lorraine Sprinkle. Mr. Sprinkle, diagnosed with attention deficit disorder, joined the Job Corps, where he learned welding and earned his GED.

Though Mr. Sprinkle was 12 years younger than Donnelly, with no formal art training, he was the leader and inspiration of the group when they planned the "Hammering Man" event.

Donnelly said Mr. Sprinkle's ideas were powerful and energizing, and with the other FA members handling press releases and logistics, the group functioned well. "Unfortunately what it did was turn Jason into a star, and he hadn't been looking for that. It got him in a lot of trouble," Donnelly said.

In July 1996, Mr. Sprinkle's career crashed after another art event he choreographed.

Already in an emotional state after the break-up of a relationship, Mr. Sprinkle planned a final guerrilla art installation by himself, without running his idea past FA members. He intended it to be his last. Mr. Sprinkle had parked his beat-up truck loaded down with a huge red, metal-heart sculpture in Westlake Center, punctured the tires and left.

He suspected it would cause a furor. He didn't realize the police would interpret it as a bomb scare. But, among other graffiti scrawled across the vehicle were the enigmatic words: "Timberlake Carpentry Rules (The Bomb!)," which had been written by a kid at a Job Corps camp in Timber Lake, Idaho.

So soon after the Oklahoma City bombing, police evacuated a nine-block area of downtown and brought rush-hour traffic through the city to a halt. Mr. Sprinkle was arrested and bail set at $100,000.

Eventually, Mr. Sprinkle accepted a plea agreement and served 33 days in the King County Jail. "He was completely changed by the time he came out of there," Donnelly said. "He was scared. That had been the thing about Jason, he [had been] absolutely fearless. He was scared, and he was embarrassed. He knew there was something wrong with him."

Since then, aside from a few small, intimate pieces, Mr. Sprinkle did not create art. He worked as a laborer, doing construction, handyman jobs, whatever, but never was able to hold a job for very long, Karina Sprinkle said.

"He was a person with so much promise," she said. "He was always thinking about how to respond to the world and say something. He was a really loving person, with no barriers to people. You had to take down some of your own when you talked to him."

Mr. Sprinkle is survived by his mother and stepfather, David Gaffney of Seattle; father, Robert Muth, and half-sister Shannon Sizilia, both of Port Orchard. 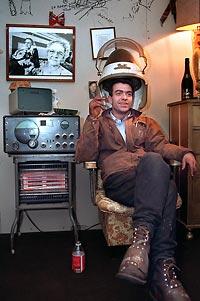 Jason Sprinkle was photographed January 23, 1995 at the Ballard studio where Fabricators of the Attachment created their artwork for their guerrilla art events. (BETTY UDESEN / THE SEATTLE TIMES, 1995) 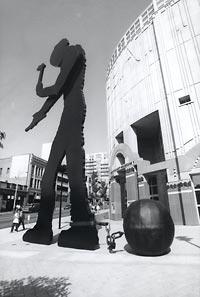 The piece, padded so it wouldn't damage the sculpture at the First Avenue entrance to the Seattle Art Museum, was intended as a Labor Day commentary on the oppression of working people. (BARRY WONG / THE SEATTLE TIMES, 1993)

In July 1996, Jason Sprinkle parked his beat-up truck loaded down with a huge red, metal-heart sculpture in Westlake Center, punctured the tires and left. (STEFANIE BOYAR / THE SEATTLE TIMES, 1996)

He didn't realize that the police would interpret his art event as a rush-hour bomb scare, paralyzing downtown Seattle in 1996. (TOM REESE / THE SEATTLE TIMES, 1996)