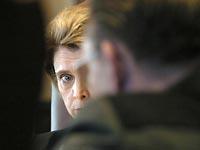 OLYMPIA — Gov. Christine Gregoire wasn't pushing for a gas-tax increase or talking much about fixing the Alaskan Way Viaduct and the 520 bridge when she entered her first legislative session nearly four months ago.

In fact, during last year's campaign, Gregoire said she opposed — at least for now — raising the gas tax.

So how did it end up that, on the final day of the session, it was Gregoire who played perhaps the most pivotal role in pushing through the biggest gas-tax increase and transportation-spending package in state history?

After serving three high-profile terms as Washington's attorney general, when Democrat Gregoire entered the race for governor she didn't really have a record that spoke to her political beliefs. And throughout last year's campaign, her cautious and tightly controlled message left many people wondering what kind of governor she would be.

"I thought I knew a lot about her character and her ability to negotiate," said Senate Majority Leader Lisa Brown, D-Spokane. "But it wasn't clear which issues she would stand up for and help out on."

But Gregoire's role in achieving the landmark transportation package, and her work on other legislation, revealed a lot about her views and her approach to politics. While she didn't take the lead on any of the biggest issues of the session, she often dove in at the end and burnished her reputation as a deal closer.

In the frenzied final weeks of the 105-day session, Gregoire was instrumental in rounding up the last few votes needed to pass one of the toughest car-emissions standards in the nation. She bucked heavy pressure from business lobbyists in helping salvage a labor-backed bill boosting unemployment benefits for laid-off seasonal workers.

And when Senate Democrats were trying to pass a highly controversial bill banning discrimination against gays and lesbians, Gregoire lobbied one undecided senator long into the night on the eve of the vote.

Democratic allies say Gregoire is a refreshing change from her predecessor, Gary Locke, who often didn't make his positions clear and was frequently criticized as indecisive and standoffish.

"I had never really worked with [Gregoire], so I really didn't know what to expect," said House Majority Leader Lynn Kessler, D-Hoquiam. "But as she watched the process unfold, she started to get more resolute about what she wanted to do. When she takes a position, she really goes for it."

Republicans, however, say Gregoire is still unproven as a leader and is turning out to be more liberal than the centrist she portrayed during the campaign. They also accuse her of reneging on a campaign promise to not raise taxes.

Still, some Republicans give her high marks for her dealings with the Legislature.

"Politically, we don't agree on very much," said Rep. Mike Armstrong, Republican floor leader in the House. "But I like her straightforwardness. She's very personable, open and honest."

Most newly elected governors get a couple of months to prepare before taking office, and then can enjoy the political comfort of not having to face another election for four years. Neither was true for Gregoire.

She did not find out until just a few weeks before inauguration day that she had eked out a 129-vote victory — the closet margin in state history — over Republican Dino Rossi. Many voters still do not view her as the legitimate winner.

And with Republicans still pushing a court challenge to overturn the election, Gregoire has had to face the lingering prospect that a court could remove her from office and order a revote as early as this fall.

Though Gregoire was greeted in January by the most solidly Democratic Legislature in more than a decade, she put forward a very modest legislative agenda.

She left it to the Legislature to lead the way on nearly all of the big policy debates.

"Everybody advised me to narrow down, don't go for too much," Gregoire said in a recent interview.

For much of the session, Gregoire focused her attention mainly on writing her first budget and assembling her team of agency directors and top advisers.

Still, Gregoire quickly made it clear she intended to play a visible role in the Legislature.

She testified before more legislative committees during her first month as governor than Locke did during his entire eight years. And toward the end of session, she marched upstairs several times a day to lobby lawmakers.

Democratic leaders said it was sheer tenacity in the session's final days that enabled Gregoire to rescue the centerpiece of her agenda: a bill to create a billion-dollar Life Science Discovery Fund for biomedical research.

"My predecessors told me during my inauguration that I wouldn't like the legislative process because no rule is really a rule and it gets messy," Gregoire said. "Much to my surprise, the opposite is true: I really enjoy it."

The life-science fund, a variation on an idea Locke first floated more than a year ago, didn't come as a surprise to anyone. Gregoire pitched it a lot during her campaign.

Gregoire also stuck by her campaign promise to give state employees and teachers their first cost-of-living raises in several years, and to restore money for a voter-approved initiative aimed at reducing class sizes.

During the campaign, Gregoire assailed Rossi for proposing to cut thousands of children off the state's Medicaid program. In one of her first acts as governor, she ordered changes likely to add thousands of kids.

And Gregoire, who vowed to "blow past the bureaucracy," has taken some steps to shake things up in Olympia.

She recently announced a plan to eliminate 1,000 middle-management positions from state government, though none has been cut yet. And when news broke that the state's child-protection agency had blown its budget by more than $12 million, she wasted little time getting rid of the agency's director.

But some of Gregoire's biggest actions in the Legislature didn't match her campaign messages.

Throughout the campaign, for instance, Gregoire — like Rossi — repeatedly said she would not raise taxes for the state operating budget.

"To go out and tax people at a time when we're just trying to get ourselves out of a recession, to me, is the wrong direction for the state," she said during the state Democratic Party convention in June.

Instead of raising new taxes, Gregoire vowed during the campaign to take a "hard-nosed and long-overdue look" at the more than 430 tax loopholes that cost the state billions of dollars each year. She frequently cited the state's tax exemption on gold-bullion sales as an example of a questionable loophole.

Once in office, however, Gregoire stopped talking about the tax loopholes, including the one for gold bullion, which remains in place.

And in the next few weeks she is expected to sign a new $26 billion, two-year budget that includes nearly $400 million in new taxes — mostly "sin taxes" on cigarettes and liquor.

But the governor says she was referring to general taxes — not sin taxes — during the campaign. She says she stood firm against some Democratic leaders who advocated broader increases in state sales and business taxes.

Gregoire said her critics will "never appreciate how close they were to seeing other kinds of taxes."

During the campaign, Gregoire also said she wouldn't push for a gas-tax increase until taxpayers are convinced they are getting their money's worth for the nickel-per-gallon increase lawmakers approved in 2003. She even criticized Rossi for having voted for the 2003 increase.

But Gregoire says she changed her mind after taking a recent field trip with Seattle Mayor Greg Nickels to inspect the quake-damaged viaduct and aging 520 bridge. Experts say both are at risk of failing.

"I did not know how bad it was," said Gregoire. "If people die and I could have done more, I couldn't live with that."

After staying on the sidelines throughout most of the session, Gregoire plunged into the transportation debate in the final days, threatening to drag lawmakers into special session if they did not act on a plan to increase the gas tax by 9.5 cents per gallon over the next four years.

The new taxes will help raise $8.5 billion, much of which will go toward replacing the viaduct and the 520 bridge.

Lawmakers from both parties said Gregoire's special-session threat, and her willingness to stand up for the tax package, made a big difference.

"There was a lot of talk about the politics of the situation," Gregoire said.

"I finally just said, 'Look, nobody can say they're at greater risk than me.' "

Comparing Christine Gregoire's stands on key issues as a candidate and her actions during her first legislative session as governor.

On increasing the gas tax:

Candidate Gregoire said she did not support another gas-tax increase until taxpayers are convinced that a nickel-per-gallon increase approved in 2003 is being well spent.

Gov. Gregoire helped pass the biggest gas-tax increase in state history. She said a recent inspection of the Alaskan Way Viaduct and the 520 bridge persuaded her to act this year.

On whether she would raise taxes to help balance the state operating budget:

Candidate Gregoire said, "To go out and tax people at a time when we're just trying to get ourselves out of a recession, to me, is the wrong direction for the state."

Gov. Gregoire went along with the Legislature in raising more than $400 million in taxes — mostly on cigarettes, liquor and wealthy estates. She said her no-new-taxes pledge applied to general taxes, not "sin taxes."

Candidate Gregoire vowed to take a "hard-nosed look" at the more than 430 tax exemptions on the state's books. She cited the tax break on gold bullion as one that could possibly be eliminated.

Gov. Gregoire has not yet proposed eliminating a single tax loophole.

Gov. Gregoire made the fund the centerpiece of her first legislative agenda. She lobbied hard for the bill, which was approved.

On restoring funding for teacher pay raises and to reduce class sizes:

Candidate Gregoire promised to do both.

Gov. Gregoire did both.

Candidate Gregoire said, "I will lead the fight to give Washington residents the right to import prescription drugs from Canada."

Gov. Gregoire sponsored a bill approved by the Legislature that would allow residents to import prescription drugs from Canada, pending a waiver from the federal government.