Michael Medved and "controversy" tend to show up in the same sentence a lot these days. He stirred up plenty when he revealed a key plot element of "Million Dollar Baby," and he's sure to stir up more with his new book, "Right Turns — Unconventional Lessons from a Controversial Life" (Crown Forum, $26.95).

We had a civilized exchange with the contentious right-wing talk jock and Mercer Islander, whose nationally syndicated show airs noon-3 p.m. on KTTH (770 AM).

How does it feel to be known as the world's most notorious movie spoiler?

(Big sigh.) Bemused. And the reason I say "bemused" is because obviously the publicity is helpful when it comes to selling a book. But on the other hand, the distortions in terms of what I've actually said or written about "Million Dollar Baby" are so gargantuan that the only proper way to respond is with incredulous laughter.

Can you sum up?

It is alleged that I gave every detail of the plot, and it's simply not true. I never did. This became an issue because in a series of interviews about current movies, I indicated my displeasure with the way "Million Dollar Baby" was marketed.

Personally, I was upset that it wasn't a comedy about "foxy boxing."

(Laughs.) Well, I think that's what everybody was expecting, sort of "Against the Ropes," only this time the manager wasn't Meg Ryan. It's one of those things where I did not want a jihad against the movie. I did not try to damage the movie — which I obviously didn't, in any event. And then again, I think there was a tremendous amount of dishonesty on the part of folks who seemed to suggest the movie's right up the middle on assisted suicide. It's not. It treats helping someone to die as the ultimate expression of love.

Does the fact that it cleaned up at the Oscars repudiate you?

No, I think that frankly ... they devised an absolutely ingenious scheme for campaigning for leading Oscars. Which is to say to people that if you want to vote against Michael Medved and everything he stands for — and of course everyone in Hollywood does — you want to vote for "Million Dollar Baby."

The people who dislike you — like Vanity Fair's James Wolcott — object to your habit of evaluating movies not as art, but by what you perceive as their moral values.

Which is, of course, an indication that Wolcott doesn't listen to the show and doesn't read me. For instance, I am not a Ché Guevara fan, but I was a big fan of "Motorcycle Diaries." I think it is possible to say about a movie that it is artistically a very successful film at the same time that when you're talking to people you warn them that this film, while it is a pleasure to watch and it's well done and well acted and everything about it works, it glamorizes somebody who I don't find in any sense admirable.

As a conservative and a broadcaster, what do you think about the raised indecency fines — and expanding them to cable, satellite and the Internet?

Terrible idea. I say that as a conservative because I've had the experience on the air of having people who should know better drop the F-bomb. Of course we had to press the dump button because we have a seven second delay. I'll tell you who it was: Chris Matthews.

The thing that I'm worried about, about the fines — let's say that we have President Clinton, which I think is entirely possible — President Rodham Clinton.

Come on, you do not.

Oh, I do. I'm the conservative who thinks that Hillary is hugely formidable.

Aren't you just the one who wants her to run to ensure that Republicans win?

No, not at all. I can't think of a single Democrat that I would less like to run against than Hillary. I think Hillary will be very tough to beat. If we have President Rodham Clinton, the ability to use these kinds of fines to put every conservative talk show off the air is very real. What if somebody tries to screw up your show and get you in trouble?

You're a vegetarian. What's your position on fake grill marks on veggie products?

That's a fascinating question. I like it. I love Grillers. I do. Morningstar Farms products, which are vegetarian and kosher, are a staple of my diet.

You detail a lot of the attacks against you in your book. Are you always ready to throw down?

Pretty much. That's part of why I enjoy what I do.

Where's this come from?

In my parents' home, we loved to argue. Everybody argued. And then I did debate in high school. I do think there is an element to Jewish identity where if you look at the Talmud — which we're supposed to study — it's one long argument. And you could say our entire tradition is a lengthy argument with God. To be very clear, you're supposed to observe terms of argument that are civilized. And the whole idea is to disagree not on a personal basis. ... Generally, I try to take pride in being sort of the radio home for civilized debate, and I think that for the most part the debate on our radio show is civilized.

The blurbs on the back cover of "Right Turns" are from Rush Limbaugh, Mel Gibson, Dr. Laura, Ann Coulter and William Bennett. Not exactly a wide-ranging cross-section of opinion.

Look, my book is unapologetically conservative, and I think it has been marketed in an unapologetically conservative way. Though I've been very gratified to get positive response from places like The New York Times, where I wasn't exactly expecting it, because of the ability of the book to connect with people who don't necessarily share the political outlook of Limbaugh, Coulter, Bennett and Gibson.

Lesson 24 is enigmatically titled, "For the Most Part, Conservatives Are Both Nicer and Happier Than Liberals." Could you elaborate?

Sure. Part of contemporary liberalism depends upon constant complaint and whining, because if things are basically OK and getting better, then you can't justify some sweeping new governmental initiative. But it seems to me that the left has become absolutely addicted to the Chicken Little school of social commentary with a constant refrain that the sky is falling — and sometimes literally.

Do you feel nicer and happier than your average liberal?

As co-author of "What Really Happened to the Class of '65?" aren't you're the one who underwent the most notable transformation?

Not quite. I was voted really radical in my high-school class, and I'm still really radical. I feel there's been tremendous consistency there.

How do you know if you become a self-caricature?

Maybe when you don't recognize yourself. The other answer that I would give, briefly, is that I think you help avoid being a self-caricature when you can continue to avoid utter predictability. And I work very hard every day on the air not to be predictable in terms of the choice of topics or my approach to them. 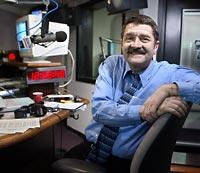