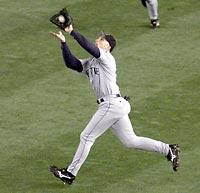 PEORIA, Ariz. — The Prince of Peoria moves about like royalty. They love him here, from the opposing dugout at nearby Surprise Stadium to the bleachers where tanned seam-heads chant guttural RA-ULs every time he steps into the batter's box.

They see the smile that breaks wide from the corners of his mouth, and they forget that Raul Ibanez almost never made it here. They forget the decade he spent struggling to become a regular in the majors.

They see the line drives he whips into the gaps, the runners he drives in to lead the American League in spring training runs batted in, and they forget that Ibanez had to leave Seattle for Kansas City before he blossomed.

They see his appreciation for the game, the mindset, the approach. And they appreciate him even more because of that, chanting his name, wearing his jersey, begging for his autograph.

"They love Raul because of who he is and what he stands for," said Royals general manager Allard Baird, sitting in a box in his team's Surprise Stadium the other day. "They look at the player, the makeup, the approach, the willingness to listen. All those things where he's really above average across the board. He developed himself into a great player. You have to respect a guy like that."

The approach to baseball is really the heart of the Raul Ibanez story. It's why he never gave up hope when the Mariners shuffled him between Tacoma and Seattle. It's also why he's not terribly overjoyed with his 26 spring training RBI, including four last night, breaking Ken Griffey Jr.'s club record of 25 in 1998. He has 30 hits and is batting .395.

"The numbers don't really mean that much down here," Ibanez said this week. "The approach and the mindset is what's important."

Ibanez immediately took all his other offers off the table and moved to Kansas City. They believed. That was enough. But success was not immediate.

The Royals wanted Ibanez to shorten his swing that first season in 2001, to lift the ball instead of trying to back-spin it out of the park. They wanted him to go back to the minor-league approach that made him so enticing to the Mariners.

Seitzer taught Ibanez to concentrate on the smallest details — like never swinging harder than 80 percent during batting practice. He taught Ibanez to focus on hitting to the opposite field and on the chess game hitters play with pitchers.

"A lot of people had doubts about him early in 2002," Royals manager Tony Pena said. "He was struggling. Maybe he even had some doubts about whether he could hit in the big leagues every day."

Ibanez proved himself that season, batting .294, smacking 24 home runs and jump-starting his reputation as a run producer with 103 RBI. The next season brought more of the same, along with contention for the surprising Royals. And then Ibanez left for Seattle, for twice the money and a chance to win.

Jose Lima left, too, and the Royals lost their leaders. When they lost Ibanez, they lost a guy Pena called "our most consistent player." They also lost 104 games in 2004.

"When you take Ibanez out of the lineup, it's different," said Lima, who returned to Kansas City this offseason. "A guy like him leaves, a team changes."

If his career has shown Ibanez anything, it's how quickly baseball changes. You can go from journeyman to coveted after working with Kevin Seitzer. You can also go from coveted to injured just as easily.

"That was definitely a frustrating season," Ibanez said. "I came here, and I thought we were going to win 99 games, and we wind up losing 99 games. I wound up with a pretty bad hamstring injury. Fortunately, that's behind me now. I've worked hard to get that back."

He pauses and flashes the smile that they love so much here. "I'm still hungry," Ibanez said. "Hungrier than ever."

Baird saw that this week when the Royals hosted the Mariners in Surprise, Ariz. He watched Ibanez rounding second base and sliding into third "like it was the last out of the World Series."

"What stands out to me," Baird said, "is consistent character. Not one day up. Not one day down. Through those actions, people follow."

Mariners manager Mike Hargrove echoed those sentiments this week when asked what impressed him most about Ibanez.

"His professionalism, more than anything," Hargrove said. "The fact that he's swung the bat well. And he's a better outfielder than what I saw as an opposing manager."

The question now, is whether Ibanez, 32, can drive in runs at this rate during the regular season. With Ichiro, Jeremy Reed, Adrian Beltre, Richie Sexson and Bret Boone occupying the five slots in the order in front of him, the possibility is there.

So Ibanez looms larger than the mountains in the distance at every Arizona ballpark. They love him here, for the autographs and the RBI and, more than anything, for the approach. 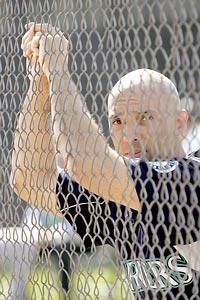 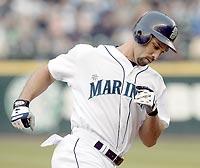