John Brace, master adventurer who has canoed the length of the Yukon River and trekked Katmandu, sat down with his wife eight months ago to talk about how he should die.

The tortured conversation came after the 47-year-old had battled brain cancer for two years and had developed a pulmonary embolism, a blood clot, that threatened his fragile life.

Medical machinery, doctors had told the couple then, could stave off death for some time.

But is this how John Brace would want to live?

It's a question families have been confronting privately long before the case of Terri Schiavo morphed it into a very loud, public and national debate.

Lucid even after partial paralysis and some brain damage, Brace is making decisions about life and death in a way Schiavo and others like her cannot.

"I knew that any more complications would likely lead to complete brain damage and I'd be done with," Brace said, his speech slurred from paralysis. "I don't want to be kept alive artificially."

In a week when the airwaves pulsed with news about who decides life and death, Brace sat upright in a hospital bed in the Issaquah home he shares with his wife, Diane, and their two daughters Eva, 6, and Nyta, 3.

On the door of the bedroom is a "do not resuscitate" order he signed last August.

"I don't want to have a respirator [for breathing] or a regulator [for the heart]," Brace said. "I would like to have some water. It would be horrible to die of thirst."

First diagnosed three years ago with glioblastoma multiforme — the most common and aggressive form of brain cancer — Brace in August signed the Physician Orders for Life-Sustaining Treatment (do not resuscitate) form that guides medical workers in an emergency.

The wrenching decision was one he and his wife reached through talk and tears after doctors told them any number of complications could leave him comatose or otherwise incapacitated, teetering between life and death.

In September, with Brace's motor skills deteriorating and his body unresponsive to medication, the couple made another tough call: End all cancer treatment and let nature take its course.

"It was an absolutely difficult decision, horrible," Diane Brace said. "It was a giant leap for a man who never got tired, whose body was like a machine."

It was the decision that caused his family the greatest stress, his wife recalled: "They were heartbroken and stunned. They saw it as giving up."

She remembered a painful conversation with a family member who shouted into the phone: "I want to make sure this is John's decision. Let me talk to him."

The Braces sought the help of Providence Hospice of Seattle, which offers a comprehensive program to help families through a patient's end of life. Social workers brought family members together to support John's wishes.

Strip away the politics, the judges and the pundits and Terri Schiavo's story could be the story of your neighbor, your aunt, your son.

It stole the national stage in a way such cases seldom do, forcing Americans into uneasy, but important, conversations about the quality of life and death.

Sherill Brace, John's mother, said it's unfortunate that politicians hijacked the family's decision-making in the Schiavo case. Much of that might have been prevented if Terri Schiavo had documented her wishes, she said.

"It's complicated if her parents aren't convinced that's what she wanted," Sherill Brace added. "This is something young people need to be aware of. But it's not something they want to talk about."

Rob Luck, director of social services at Providence Hospice, said that in the days since the Schiavo case began dominating the news, people have called to inquire about end-of-life services.

Documents such as living wills or advance directives are important, Luck and other experts said, in letting you decide if you want to be kept on artificial life support if you're ever permanently unconscious or otherwise unable to speak for yourself.

A durable power of attorney allows you to select someone you trust — a spouse, a parent, another loved one — to act for you if you're unable to act on your own.

The Physician Orders for Life-Sustaining Treatment form provides instructions to emergency-care workers and doctors about how far they can go in treating you if your life is suddenly in jeopardy.

But sometimes these documents alone aren't enough, noted Peter Ditto, a professor of psychology and social behavior at the University of California, Irvine.

For example, Ditto and a team of researchers found that surrogate decision-makers got patient preferences correct only 70 percent of the time, often erring on the side of overtreatment. "Filling out a living will and putting it away in a file cabinet will not accomplish any of these nuanced circumstances," he said. "It must be accompanied by meaningful conversations that gives a sense of what that person's goals are."

John and Diane Brace had given little thought to their own mortality when he was diagnosed with a brain tumor three years ago.

Growing up in Renton, living just a few doors apart, the two had played together as kids.

When Diane was 30 and John 32 — and just back from a nine-month trek across Asia — his mother nudged him, as mothers sometimes do: "You ought to call Diane."

"When I finally asked her to marry me, and asked where she wanted to go on our honeymoon, she said 'Why don't we go fly-fishing in Montana?' I knew I had the right girl."

John craved the outdoors, while Diane loved animals. He jogged, hiked and climbed mountains. More than once, he strapped on skis and glided down Mount Rainier. He lived for a time on the Yucatan Peninsula and trekked Central Asia's ancient Silk Road.

The Braces bought homes with enough land for the animals Diane doted on: horses, peacocks, exotic chickens and, later, ponies for their two girls.

John was a manufacturing engineer with Boeing before he went back to school to learn computer programming.

In 2000, he landed a job with Cancer Research and Biostatistics, a Seattle nonprofit.

His symptoms in February 2002 started with headaches that came with nausea and bright flashes across his vision. Doctors originally misdiagnosed the problem and performed sinus surgery before an MRI discovered the brain tumor.

It was a death sentence: glioblastoma multiforme, a rotten deal for a couple to whom life had otherwise been so kind.

"We were so happy," Diane said. "We had perfectly healthy kids. John had a job that he loved. Everything was perfect. I thought, 'Oh, they've made a mistake. They crossed John's results with someone else's.' "

Surgery to remove the golf-ball-size tumor in July 2002 was successful. John was back to work within two weeks of the surgery and he was jogging in seven days.

He began radiation, followed by chemotherapy, which had few of the normal side effects. Things were looking good.

Doctors had given him 18 months to live, but the couple began to think John might be the exception. He kept to his routine: "I thought that if you changed your lifestyle, then somehow you might be admitting defeat."

The couple prepared living wills, and John gave Diane his power of attorney. "I know Diane will do what it takes to make me comfortable and make it easy on the whole family," he said.

John said he read everything he could about his illness, paying particular attention to those who survived. "They all had good medical care and they had lots of support around them," he said.

Still, the doctors' warning that the tumor could grow back was never far away.

And it did come back.

This time, John wasn't so lucky. The operation left him paralyzed on his left side and he suffered some brain damage.

A few weeks later, he developed an infection, prompting another craniotomy, in which surgeons drained the fluid from his head and removed an infected portion of his skull.

John said that for Schiavo, as for anyone in such a situation, he believes the important thing is comfort.

He turns to his wife: "Honey, make sure I'm comfortable. Give me drugs. That's why I picked you," he joked.

All this talk is making John Brace tired. He uses his right side to pull his limp left side back into bed.

During the day, he listens to meditations and books on tape.

He worries about his daughters. With the help of Safe Crossing, a Providence Hospice program, the couple explained Brace's condition to the children.

His tears come freely as he talks about their life without him: "I won't be around for their senior prom or to help them learn how to drive."

Diane moves to his bedside, stroking his hand.

Sandy, a 20-year-old cat that avoided John before he became sick, jumps onto his lap. Now, she's his constant companion, Diane said. "We call her the healing cat." 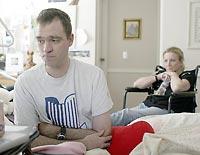 A planning tool to help people answer simple questions about how they want to be treated near the end of their lives by doctors and families. Legal in 35 states, including Washington, it addresses the following points:

Wish One lets you choose the person you want to make decisions for you when you can't make them for yourself. Lawyers call it a "durable power of attorney for health care."

Wish Two is a living will. It lets you put in writing the kind of medical treatment you want or don't want if you become seriously ill and can't communicate.

Wishes Three and Four let you describe in detail how you want to be treated so that your dignity can be maintained.

Wish Five gives you a chance to tell others how you want to be remembered and to express other things that might be in your heart, such as forgiveness.

Source: Aging with Dignity provides information about end-of-life care, including access to its version of a living will designed to express a patient's medical, emotional, personal and spiritual wishes — www.agingwithdignity.org