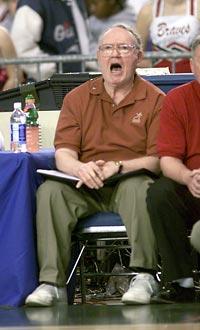 If you ever wondered why 77-year-old Keith Gilbertson Sr. continues to serve as a volunteer coach for the Snohomish High School girls basketball team, the answer was written all over his face Saturday night.

He once was afraid to cry, but tears rolled down his cheeks after the girls lost to Garfield, 63-58 in overtime, in the state Class 4A championship game.

Gilbertson is certainly not that, although he has fought off attacks from cancer and a stroke over the years. He keeps showing up for practices and games, and plans to do that pretty much forever.

"I never made much money teaching school, but I'm the richest guy in the world in relationships. It's a reward every time I touch base with these youngsters," said Gilbertson, the father of the former University of Washington football coach of the same name.

"There's no reason to ever back away from this. It's a marvelous situation. I've had some chances to go elsewhere in the past, but I wanted to stay with one school."

It's now beyond 60 years. Gilbertson graduated from Snohomish in 1945 and began teaching at the school in 1950. He was the head football coach for three years, then switched to boys cross country and won two state titles and finished second three times. He came back as an assistant football coach in the 1960s and head coach for boys basketball.

He quit teaching at the school in 1981 and became a volunteer coach until 1995, when his wife, Eileen, passed away. He went through a tough time, dealing with depression after her death but rediscovered his love for kids and coaching by connecting with the girls basketball teams beginning in 1996.

Snohomish coach Ken Roberts said what has helped Gilbertson come through his depression was turning more to his spiritual side as well as the challenge of dealing with another generation of athletes.

"He leads the stretching at the beginning of practice. The girls call it Gilbizing," Roberts said. "He works them hard, push-ups, sit-ups, for 15 to 20 minutes. You could tell we were in pretty good shape at state.

"... He's really smart with what he does. I coached boys before I came here, and I used to work them hard every day. But he'd say to me: 'These aren't boys. They don't bounce back as well. You can't wear and tear the team as much.'

"That advice helped me more than anything. He understands the human body. And when the kids know the coach loves them, they play harder for him."

Roberts knows. He played for Gilbertson in the mid-1980s, although he said, "He wasn't quite as mellow as he is now." Athletes from as far back as the 1950s continue to communicate with him. He writes several letters a week — the handwritten kind as opposed to e-mails — to former players to give them encouragement, advice or just to tell them what's going on in Snohomish.

They write back and call him, thanking him for his concern and care. He is loved.

Roberts asked Gilbertson to address the girls before their semifinal game Friday against favored University, a team that had beaten the Panthers by 12 points earlier in the season. He told the girls that he had "the utmost confidence in this group, and I'd never sell you guys short. You've proven time and again that you can do it."

The Panthers went out and upset University, 58-52. The Panthers then led bigger, faster Garfield for much of the championship game until the Bulldogs caught them in the final minute. The Bulldogs went on to win in overtime, causing the gush of tears.

"When I was a kid, I was told it's not manly to cry," Gilbertson said. "I couldn't cry at my parents' funerals and other things where I should have. But it's not unmanly anymore. The kids really get close to us emotionally. You can't blame them for having some tears. It's an honest emotion.

"Our girls are as tough physically as anybody, but there is the emotional side as well. Boys can cry, too, but it's different. Girls cry a lot easier about a lot more things. And there's nothing wrong with that."

Gilbertson was there with them, tear for tear.

There were times this season when the Mountlake Terrace boys basketball team didn't know what it was.

The Hawks were supposed to be one of the top teams in the state, opening the season ranked No. 2, but lost their first two games. They recovered to win five in a row before being crushed by O'Dea, 70-44, on Dec. 29.

"If there was a turning point, that was it," Terrace coach Nalin Sood said. "We realized we needed to do a lot of things better."

They did. The Hawks won 17 of their final 20 games and came within one possession of playing for the state Class 4A championship. They lost in the semifinals to eventual champion Bethel, 47-44, turning the ball over with five seconds left. Yet they bounced back Saturday and beat a strong South Kitsap team, 64-43, to finish third.

"The way they came back and played Saturday made up for a lot of disappointment," Sood said.

It was the Hawks' best finish since 1977, when they won the title. However, the Hawks will graduate seven players, the vast majority of their scorers and rebounders.

"They'll be counted out next season, but they'll be out to prove everyone wrong," Sood said.