Virginia Schloredt awoke in February 2002 to the sound of her car alarm. Outside, she found her Lincoln Continental floating down the driveway.

Floodwaters from the Stillaguamish River crashed like a waterfall over the dike at the edge of her yard. Before long, the water was wreaking havoc on the wooden floors in her farmhouse.

Her house stuck up out of the yard like an island on a lake for nearly two weeks before the water receded.

It was the fourth time in a decade that floodwaters had found their way into the house. But in the 110 years before 1990, the house had never been flooded.

The home's vulnerability has sparked a dispute between its owners and the city of Stanwood. Schloredt and her companion, Robert Lint II, who also lives at the house, say gradual development has corralled floodwaters into their yard and the fields that surround it, shielding Stanwood from flooding at the homeowners' expense.

Schloredt and Lint's house is surrounded by vegetable fields in a bend of the Stillaguamish River just outside Stanwood. Floods have increased for all their neighbors, but their house has taken the biggest hit. They blame the city.

"They created a problem, and now they want us to pay for it," Lint said. "What they're doing right now is saying, 'We don't have the water. It's your water. Deal with it.' "

City officials contend that the valley has always flooded.

"If you get right down to it, Stanwood's in the wrong place," said Bill Beckman, the city's public-works director.

The city did not respond to the homeowners' claims of damages in 2002 and 2003 floods, so they sued in January.

A combination of climate changes and development in the past 15 years has brought the worst flooding on record in the Stillaguamish Valley, according to the U.S. Geological Survey. Low-lying Stanwood is near the end of the Stillaguamish River's North Fork, which flows faster than it used to because of development upstream in the Arlington area.

Floodwaters traditionally drained from the valley that houses Schloredt and Lint's farmhouse by way of Irvine Slough, which traces the path of Highway 532 past old Stanwood out to the Stillaguamish River.

When pioneers settled in Stanwood, steamboats could ride up and down the slough. But today it is little more than a ditch and is used mostly to drain stormwater from Stanwood. The city dammed the slough in 1991 with a dirt berm. The berm, known as Larson Dam, keeps floodwaters out and makes room for the city's stormwater.

"They're hogging the whole slough for themselves," Schloredt said.

She wants the city to tear out the dam. That's not likely, say local elected officials and the U.S. Army Corps of Engineers, but the city did make a mistake when building the dam. Although the city had a permit to build a dam with two culverts, it built a dam that only had one.

Now the city is asking the corps to permit the dam it built without requiring a second culvert.

"I'd be very surprised if they didn't approve it," Beckman said. "It would seem very out there to me."

Since the city has not completed its application, the corps wouldn't comment on its chances. But the corps said the city's dam is in violation. Complaints about the dam backing up led to the corps' discovery that the city had built the dam incorrectly.

"I think the city needs to do substantial mitigation because it's their fault," said state Sen. Mary Margaret Haugen, D-Camano Island. "You can't totally blame the city, but building a dam across the major waterway is obviously a problem."

While the city works on its permit application, the local flood-control district and Schloredt are writing grant applications for two solutions.

The first is to raise Schloredt and Lint's house by 5 feet. The area's first Lutheran minister built the house in 1880, before Washington was a state. Because of its historical significance, there is substantial paperwork involved with raising the house. The state Department of Emergency Management is helping Lint and Schloredt seek a grant to pay for most of the $85,000 project.

The Stillaguamish Flood Control District is applying for two grants to help pay for a tide gate that would allow floodwaters to drain more quickly.

At this point, flood commissioners believe avoiding floods altogether is probably unrealistic. But because the city is unwilling to agree to a more drastic solution, a $175,000 tide gate would at least minimize the property damage.

"This is the second-best we can do," said Snohomish County Councilman John Koster, R-Arlington. City officials "have not seemed to be too cooperative at looking at a really adequate solution to the problem."

"It's a good project that they're doing," he said.

Flood-control district member Max Albert, whose family used to own the Schloredt-Lint house, described the gate as "plan B."

If city officials don't volunteer to contribute, he said, he hopes the corps will force Stanwood to help pay.

"They created a problem, and somebody else has to fix it," he said. "It's an attitude I don't approve of." 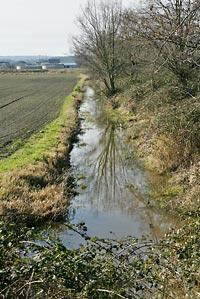