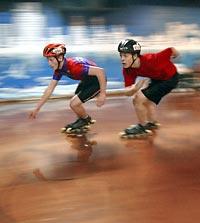 By Maria Dolan
Special to The Seattle Times

LYNNWOOD — When the members of the Team Lightning inline skate club exit the roller-rink floor after a practice, they're exhausted. But these speed skaters don't crash to a stop at the rink benches like you probably did when you were a kid. They glide in like swans, easing to a halt with a foot-dragging maneuver called a T-step. Then they sit, catch their breath, and unzip the tops of their sleek inline speed boots.

Maybe they're smoother because most aren't kids. Seven of this year's roster of 20-odd club members skate under the fluorescent lights of the Lynnwood Roll-A-Way on this October night, and only one is younger than 30.

This is the oldest Northwest team in a sport full of agile youth. And though some are here to compete, most want fun and camaraderie. Amber Randall, one of the younger members at age 27, is a doctoral candidate in pathobiology who recently turned down a lab rotation that would interfere with practices, which she calls her "escape." Vena Burch, a recent recruit who skates with her husband and loves the group's "wonderful people," started skating by going "bench to bench" around Green Lake. A lithe 62-year-old, she also dances and has rowed crew. Usually an outdoor skater, she's training to roll the 87-mile Athens-to-Atlanta inline race in Georgia next year. Mostly, she wants to stay active. "My body just feels better when it's going," she says.

Many of Lightning's most experienced members spend the rest of the year on skates outdoors, and joined this club to keep in trim during winter. They soon found it was an entirely different sport, with new speed and new skills to master. Not just the T-step, which is a necessity in speed skating's brakeless shoes, but the dreaded cross-over, when a skater rounds a corner by repeatedly crossing one four- or five-wheeled skate over the other, working desperately to avoid a fall.

"I'm keepin' up with the 30-year-olds outdoors," says Eric Partch, a 59-year-old Edmonds man with a gray ponytail trailing from under his helmet. "But there's really an age stratification indoors. It's so intense — you're always redlining."

Partch, who talks in "G-forces," says making the turns in the rink at his top speed (18 or 19 mph) is about the equivalent of "climbing stairs sideways with a 60-pound pack on your back."

"We're probably some of the strongest and fastest mid-50-year-olds on the planet," concludes 55-year-old Steve Metzner, cocky as an adolescent. He's got the nickname XLR8R embroidered on the heel of his custom skate boot. When he makes his declarations with a tight jaw, unsmiling, you wouldn't dare disagree with him.

But then he softens and goes modest. "Really, I just want to stay healthy. I have a bulging disc and arthritic knees. But I'd rather hurt in motion than sitting on the couch."

Modesty is probably for the best. As coach Dean Hastler explains, "It's a bit unrealistic to have huge racing goals at this age. You get passed by all the 12-year-olds."

All guts, no glory

If Metzner is right about his middle-aged power cabal (and his piston thighs and resting heart rate of 42 beats per minute are persuasive) these are also the least-famous uber-athletes on the planet. The sport's not televised, offers no serious cash bonuses, and is not part of the Olympics (though not for a lack of trying). Not only have few people heard of Team Lightning, but few people know indoor, inline skating exists.

"Everyone thinks you're talking about roller derby," says 38-year-old Hastler, referring to the popular mid-20th-century game using a banked track and brute force. "You might run into people when you're speed skating, but not on purpose."

The invention of smooth urethane wheels gave skating a boost, but it was disastrous for roller rinks.

With better wheels, people could comfortably roll through parks and neighborhoods, not just on a lacquered wood floor.

Many people are surprised to learn that Apolo Ohno, our Western Washington short-track Olympian, was blistering roller-rink floors before he switched to speed-skating on ice. In Europe, where inline has a higher profile, skaters are mobbed for their autographs. (There, and everywhere else in the world, speed skaters also skate on banked tracks outdoors.) Here, if you want glory, you eventually switch to ice, like Ohno did.

Team Lightning members are fine with their status. They're thriving in obscurity.

A few weeks later, 14 skaters have come to practice. There are chopped-off orange cones at corners to indicate where to make turns. The whooshing of wheels is the only sound until pop music spits out of the rink speakers. Hastler stands in the middle, yelling out instructions as the skaters battle with gravity.

"If you fall, don't spread yourself out," he calls, as a downed skater draws in his limbs. "Make a small rather than a large target. And get up quickly," he adds. "Unless something's sticking through your skin or you're passed out."

Falling is what some skaters worry about most when they think of competition. Sue Bream, Metzner's wife and a fitness instructor with the short, sinewy body of a gymnast, is the team's fastest woman. Having crashed at the last meet, she worries in advance about the competition in December, when Team Lightning will host a meet at the Roll-A-Way, and Bream will be skating again, as she puts it, "where everyone can watch you. It's awful!"

When asked why, with all this anxiety, she races, she admits her love for speed. "You do it because it's a big adrenaline rush." Partch calls this feeling his "magic carpet." He and Metzner, who both compete in long-distance outdoor skating, cackle about their triumphs on the Burke-Gilman Trail, chasing down road bikes to show off. "They're out there, they're fair game," says Partch. He grins. "It's a bad case of testosterone poisoning."

The two men are in congenial competition with fellow team member Ken Longley, 56, a "recovering lawyer" who started skating four years ago and is aiming to go to the speed-skating national championships in Florida next July. But he, like the two others, claims not to be out to win. "It's more about personal growth than competition," he insists.

Back in the rink, Hastler has them compete anyway, and Metzner surges ahead. The coach hollers good-natured skating advice as needed.

Skating is Hastler's lifelong and only sport — he's a self-described "rink rat."

His wife, Shay Hastler, is also a team coach, and the two met on skates. She also racewalks, but can't get her husband to join her because he doesn't like to be on his feet — at least not in direct contact with the ground. "I walk kind of funny," he says. "I'm more comfortable on skates."

It's Hastler's e-mails that arrive in team in-boxes when attendance slows:

"Remember it's easier to NOT practice. You still need to show up and skate and it WILL get easier!!! Let's make practice a habit!!!"

Maybe some Lightning members need this reminder, but many of them come to three practices a week, two hours a session. Aching legs are a permanent condition, like hunger in a teenager. To demonstrate how much training they do around her house, Bream raises her left leg behind her and says, "We even stand on one foot while waiting for the toast."

A fountain of youth

Every skate race is run counter-clockwise. So are most practices. This explains why speed skaters' left legs are usually stronger and shorter, and may also solve the mystery of how time has favored Team Lightning's members. These are people on whom Spandex is an acceptable fabric.

"I'm convinced skating makes you younger," says Leslie Sena, a new club member who recently announced she was turning 40, to the astonishment of teammates who thought she was closer to 30 years old. Her face is nearly unlined. A self-described former "couch potato," she started skating two years ago and has lost 20 pounds without watching her diet.

The counter-clockwise training can't work miracles, however. At the last team practice before the December meet, one of those 12-year-olds Hastler warned about visits from another rink and is placed with the fast crowd — Partch, Metzner, Longley, Bream — for a practice race. Her shorts are lettered across the back with the word "Speed," and she isn't kidding. One by one she takes the racers, blond ponytail streaming behind her, until finally she's dogging the heels of Longley, who's not just a skater but an expedition climber and skier. In the last lap she clomps, not gracefully, but effectively, right in front of him, grabbing the finish.

"Youth," sighs Sena from the bench. "Your joints still work."

The thrill of competition

The Lynnwood meet comes up right before Christmas. By 5 o'clock the sweat and disinfectant smell of the rink, which Bream dubs "rink stink," has been replaced by the scent of oily snack-bar popcorn. The sidelines swarm with children, teens and their parents. There are 12 teams at the meet, from as far away as Coeur d'Alene, Idaho, and Eugene, Ore.

It's another hour or so before most Team Lightning skaters trickle in — the oldest skaters skate last.

While they wait, they entertain themselves watching kids on wheels, tiny 4- and 5-year-olds with their bright helmets askew, whizzing around the track like flung marbles.

"I'm going to put on my skates," says Bream, even though she's not racing for an hour. "I'm better in them."

Randall, the doctoral candidate, is the only woman skating in her age group, 27-35, so she's lumped in with a younger group. She encounters technical troubles — jumps the gun once, and misreads a lap counter — but seems content to have skated without balking or crashing. The team members embrace and congratulate her like she's a celebrity.

Excitement builds for the group of Senior Men, 18-to-27-year-old guys from other teams with skates seemingly ablaze. When they race a 500 meter it raises the hairs on your arms.

Bream and Sena and Burch huddle together. Sena's not racing. Burch, already dressed in the blue and black Lightning uniform, will skate near the end, with the Grand Veteran women, in her first indoor race ever. Bream, who is nervous, is about to go on for a 700-meter race. "I wish I could take you guys with me," she says to the women, squeezing their shoulders.

Both Bream and Burch complete their races successfully, each coming in third with no wipeouts and no end of smiling.

And finally it's time for the first race of the Grand Veteran Men: Partch, Metzner, Longley and a man from "Team N' Tense." The other competitor gets left in the dust immediately. The three chums chase each other in a pack, like kids lunging for piñata candy.

"They're gonna kill each other!" laughs Bream. That aging testosterone is powerful testosterone, and it's hard to say who'll win this one, until at the last minute it's Longley.

When asked what motivates him, he looks toward his friends and says, "I think we're all going to go 60 miles an hour till we hit the wall. We've all seen the guys our age in the BarcaLoungers who've given up. That's not us."

Maria Dolan is a freelance writer who lives in Seattle. 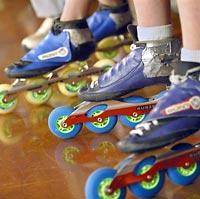 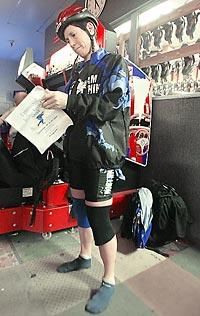