Reed, a Republican, certified the results of a statewide manual recount which Gregoire won by 129 votes. It was the third, and final, tally allowed under state law.

Republican Dino Rossi won the first two counts of the nearly 3 million ballots cast in the Nov. 2 election and has held the governor-elect title for the past six weeks. Rossi yesterday called for a new election, saying "Quite frankly, folks, this election has been a total mess."

Reed this morning said, "I do not feel like this has been a botched election."

He said he felt the election process had been fair. But still, "I would not say I think somebody ought to be conceding at this point."

Reed argued that if a court ends up setting aside the election results, he would favor a revote as opposed to the court or legislature deciding the outcome. "The people have a right to decide who their next chief executive officer is for the state of Washington, if we end up with an election set aside."

In a letter to Gregoire yesterday, Rossi said controversies surrounding their record-close election have left voter confidence badly shaken. He also said if she agreed to a revote, it would head off what could be months of bitter legal fighting that might ensue if he and the Republican Party decide to contest the latest of three ballot counts.

Whoever is sworn in as the next governor would be "shrouded in suspicion," Rossi said in his letter. He urged Gregoire to join him in asking the Legislature to call for a new election.

"A revote would be the best solution for the people of our state and would give us a legitimate governorship," he said.

Gregoire's spokesman Morton Brilliant said she would not be joining Rossi's call. "This ain't golf," he said. "No mulligans allowed here, folks."

"In the same breath, Dino Rossi says a drawn-out process would hurt Washington state and then he asks for another election," said Kirstin Brost, Democratic Party spokeswoman. "He wants to spend $4 million of taxpayer money for a new election because he doesn't like the results."

There is nothing in state law that allows for a revote, but Reed has said it could be done if a court or the Legislature ordered one. If a new election were called, the state and counties likely would have to pick up the cost.

Nick Handy, the state elections director, said yesterday he could not give even a ballpark cost estimate.

The idea of a runoff election between Rossi and Gregoire was first floated by former Secretary of State Ralph Munro, a Republican and Rossi supporter who said recently the current election count has been bungled so badly no one has confidence the votes were counted accurately.

Even though Gregoire has been certified as winner of the third count, Rossi said in his letter to Gregoire, "there won't be many people in our state who believe with certainty that you actually won the election."

Rossi said there are many people who don't think the latest manual recount was as accurate as the first two tallies, which were both done by machine.

He added that if he were in Gregoire's position -- ahead after losing the first two counts -- he would agree to a revote.

"I would not want to enter office with so many people viewing my governorship as illegitimate," he wrote.

Appearing alongside his wife and children at yesterday's press conference, Rossi said some supporters have urged him to concede in order to preserve his future in politics.

By walking away, he said, problems in the state's election system might be left to fester and there would be no opportunity to restore voter confidence.

Rossi and the Republican Party have about three weeks to decide whether to contest the election. The Republicans haven't said specifically what grounds they would use for an election challenge, but in recent weeks they have raised allegations of election fraud and incompetence, particularly in King County.

But in his letter to Gregoire, Rossi suggested a revote would be the best way to fix things.

"An election contest [challenge] would bring every questioned aspect of this election before the Legislature or a court for review," Rossi said. "It would take many weeks, perhaps months, to complete. At the end, even if the results were to change back in my favor, the state would have suffered from the long, drawn-out process."

Outgoing Gov. Gary Locke said he strongly disagreed with Rossi's call for another election. "The people have voted, and all votes properly cast were counted," said Locke, a Democrat who's retiring after two terms.

Munro, who was the state's top election official for 20 years before retiring in 2000, said last week, "What I'm hoping is we can figure a way out of this that restores voters' confidence and gives the governor a mandate. And that's my only goal. I don't care if that's Dino or Christine."

Restoring voter confidence is also the goal of a Bellevue company Munro is involved in. He is chairman of the board of Votehere Inc., which is developing a technology for a secure and confidential "voter receipt" that would show a voter that a vote had been recorded and counted properly.

The company's Web site says it "is striving to return confidence to voters and calm to its election official customers."

He said his comments about the governor's election being in chaos was not meant to promote his company's product. But, he added, "The fact of the matter is that technology is coming, and it's something the state of Washington should be looking at."

Seattle Times reporters David Postman and Natalie Singer and The Associated Press contributed to this story. 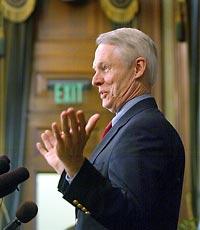