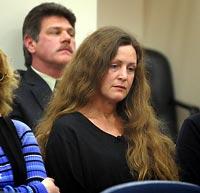 EVERETT — For the first time since his arrest for beating and stabbing a classmate to death almost 16 months ago, a Seattle teen addressed his victim's mother yesterday and offered an unemotional apology.

Jenson Hankins, 17, said he thinks daily about John Jasmer's death and calls the murder "selfish." Hankins and another classmate at Seattle's Roosevelt High School brought Jasmer to the Tulalip Reservation to exact revenge because they believed Jasmer raped Hankins' girlfriend.

Snohomish County Superior Court Judge Anita Farris called it "one of the most coldly calculated murders I've ever seen."

She then sentenced Hankins to 27-½ years in prison for his first-degree murder conviction.

On Aug. 21, 2003, Hankins and Joshua Goldman lured Jasmer from his parents' home on Seattle's Queen Anne Hill by telling him they were going to a marijuana farm in Marysville.

Upon arriving at the Tulalip Reservation, Goldman led them to a wooded spot, which he and Hankins had visited the previous day to dig Jasmer's grave.

When Jasmer, 16, wasn't paying attention, Hankins struck him on the head with a hammer. Jasmer defended himself, but Goldman stabbed him in the neck.

Goldman pleaded guilty to first-degree murder in August and was sentenced to 25 years in prison.

"I ask God, I ask my family and I try to ask your family to try to forgive me," Hankins said. "In my prayers I ask God to give you strength and ease your suffering."

As Hankins walked back to his seat, Jasmer's family called his words "unheartfelt."

"It was a joke," Mike White, longtime partner of Jasmer's mother, said after the hearing.

"It was prearranged and preplanned. There was not a bit of remorse in his voice, and not a tear was shed."

When Donna Jasmer, the victim's mother, addressed the courtroom yesterday, she begged Hankins to show some emotion. She said that after her son went missing, Hankins told her not to worry and said he was sure John would return home.

The teen's lawyer said Hankins was acting out a fantasy and never planned to kill Jasmer.

"He saw it as the only way to protect his girlfriend," said attorney Rachel Levy.

The girl reported the June 2003 rape to Seattle police but later recanted. While testifying against Hankins last month, however, she insisted she had been raped.

Jasmer told investigators that the sex had been consensual, according to a Seattle police report.

In court yesterday, Jasmer's sister, Danielle White, 13, tearfully asked why Hankins "gets to walk on this earth again?"

"There is no reason to kill someone, let alone your best friend," she said.