In the dingy, cluttered storeroom that housed the inventory for Higo Variety Store for more than 70 years, Paul Murakami tried to reach a top shelf by standing on what he thought was a wood cabinet with stuff piled on top.

"You might want to get off of there," John Bisbee advised him. "I think you're standing on a glass display case."

He was right. The antique fixture, trimmed in oak, was layered with newspapers from July 30, 1933. Atop the newspapers were two landscape paintings set within sturdy wood frames and imported from Japan, dating back to who knows when. Inside the display case was a box of well-preserved ladies' hats, probably from the 1930s, individually priced at $1.50.

Higo was a five-and-dime store that long ago helped coin the concept of Seattle's Japantown. For generations, Higo both serviced the Chinatown International District and gave character to it, its mothball smell notwithstanding.

The Murakami family closed Higo in June 2003, but its treasures keep giving. Bisbee and his wife, who opened a Japanese folk-art and Northwest-crafts gallery in the 3,600-square-foot space last month, plan to devote a wall in their shop to artifacts from Higo and the Murakami family, thus carrying on their legacy.

"I feel like we are doing a form of urban archaeology," said Bisbee, who with Murakami has been sifting through the physical remains of Higo's past.

Last week, Bisbee found a Japanese cracker-tin canister on a bottom shelf. The grime he got on his blue dress shirt while removing it was a fair sacrifice for the graphic that graced the front of the canister — and the model wood train hidden inside. Another big find recently was a silk-screened poster from a "Madame Butterfly" performance at the Seattle Opera House, probably from the 1960s.

Sanzo Murakami ran Higo on South Weller Street before moving it in 1932 into a building he constructed at Sixth Avenue South and South Jackson Street, a block from Japantown's hub. Like other Japanese-American business owners, he was forced to board up his shop while his family lived in an internment camp during World War II. He died shortly after returning home, but his wife and children restarted the business.

"That business was one of the few able to revive itself after World War II," said Ron Chew, executive director of the Wing Luke Asian Museum. "We're really fortunate to have had such continuity in business by one family, back before World War II. All this stuff that they meticulously stored away reveals that past."

The Murakami family lived in a small apartment connected to the store, using the building's boiler room as a place to bathe and launder.

The museum is caring for several heirlooms on loan from the family, including a pair of Japanese mannequins that used to be in Higo's front window, as well as a pistol, flashlight and binoculars, complete with Seattle police inventory tags, that had been confiscated before internment but later returned.

In the final years leading up to Higo's closure, Masa Murakami, the last of Sanzo's four children, ran the store with her friend Esther Matsuda. Paul Murakami, who visits his 85-year-old aunt at an assisted-living facility in the district, is helping make sure that Higo lives on even though the store has not.

"We looked long and hard for a tenant that not only would fit the space but also respect the sense of family and community that was so much a part of Higo," he said.

Through a mutual friend, Paul Murakami met Bisbee and his wife, Binko Chiong-Bisbee, who had run Kobo for nine years on Capitol Hill and were looking to expand into a second location.

"We were very deliberate in choosing Kobo," Murakami said. "It met our urgent desire to maintain Higo and, in a sense, resurrect the idea of Japantown."

Chiong-Bisbee said she considers it a stewardship, so much that the couple has named the new gallery Kobo at Higo. Respect is paid just past the entrance, too, where that same antique glass case now displays about 400 matchbooks from all over the world, a collection from the travels of Masa and her sister, Aya, who died in 1999. Behind that case is another display with two wooden tricycles from a previous era, one painted like a duck and the other a bunny, the $1.49 price etched upon the red seat.

It is as if the Bisbees inherited and inhabit a time capsule. One relic they found is a residential and business directory of Japanese Americans in the Pacific Northwest from the 1950s. The couple plans to photocopy the pages and display them at Kobo so customers can find long-gone relatives.

"People from all walks of life had so much connection to Higo Variety Store," Chiong-Bisbee said. "Even those who used to come into Higo to buy cigarettes or detergent are coming into our shop and enjoying the transition, pleased to see that the past is still here and not being forgotten." 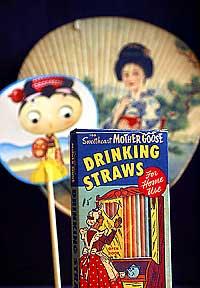