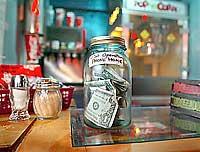 LANGLEY — It's less than an hour before showtime at the Clyde Theatre, a fixture on South Whidbey since 1937. Not much time to figure out why the executive director of the region's USO, many miles to the south, calls the movie house "absolutely amazing."

But first, The Clyde's co-owner, Lynn Willeford, has to deal with a little head that has popped in the door on the last night of a four-run showing of "The Incredibles."

"We're not open, sweetie. You're way too early."

People come early because they have their favorite seats among the 258 available, and they've got visiting to do. Watching a movie here is like being in a big living room at home with all your friends, says volunteer ticket taker Martha Murphy. Crowds applaud birthdays, good films and announcements such as the one Lynn and Blake Willeford will make tonight:

"Congratulations!" the Willefords tell the audience. By mail, matching funds and by stuffing dimes and dollars into a blue canning jar on the popcorn counter, patrons at The Clyde have purchased an estimated 50,000 phone minutes so men and women serving in Iraq and Afghanistan can call friends and family during the holidays.

"It's just wonderful," says Krista Cossalter Sandberg, executive director of USO Puget Sound Area. The money raised at The Clyde will be used in the USO's "Operation Phone Home" fund drive. "This is not a business giving us a check. This is a business pulling together a community."

The Willefords, tall and lean and socially at ease, are opposed to the war in Iraq. Their South Whidbey community ranges from free-thinking artists to retired military families who have drifted south from the naval air station at Oak Harbor. But lessening hardships for the troops is a cause everyone can support.

"The political situation may bear some resemblance to Vietnam," says Lynn Willeford, 56, "but no one wants to make the same mistake again of equating the troops carrying out the policies with the people who create the policies."

A freelance writer, Lynn is known for creating programs that help people in need with home repair, medical support, school supplies and clothing, in addition to selling popcorn. She started here as a "sweeper" to get free admission in the mid-'70s and then fell in love with Blake Willeford, who bought the place in 1972.

She "swept her way to the top," he likes to say.

Blake, now 61 and a retired carpenter, was just back from the Peace Corps when he bought The Clyde from the original owners, Norman and Hazel Clyde. At first his hippie friends worked concessions in exchange for free tickets. Now only the ticket sellers are volunteers, some for as long as 25 years.

Townspeople think of the Willefords as stewards who've managed to use profits from $5 tickets and 75-cent soda pops to retrofit The Clyde with earthquake protection, new seats and Dolby Surround Sound. The shows are once a night during the week and twice a night on Saturdays and Sundays. Each film moves on after just a few days. On weekends, 100 people or more are sometimes turned away.

The Willefords try to keep their politics to themselves so everyone feels welcome. But they felt compelled to go on stage in the first week of November to announce their plan to fund prepaid phone cards.

Twenty dollars buys 100 minutes, Lynn says. Their goal was to raise $1,000 by Christmas Eve, which The Clyde would then match to send phone cards to 100 troops.

They were well under way the first night, when half the audience got out of their seats during the previews and put money in the blue canning jar. After that, the Willefords carried the jar up on stage when. they made their speech. Patrons stuffed money in, collection-plate style, as the jar went back up the aisle.

They hit the goal at the end of one week, and the money kept coming. Matt Nichols of Nichols Boat Works, up the highway in Freeland, matched the next $1,000. George Henny of nearby Whidbey Telecom said he'd match the next.

There are so many good causes at this time of year that the Willefords feared they might taint their patrons' enjoyment if they hit them up at each show.

Hands shot up in the audience. Kelly and Diana Lindsay of Langley's Lindsay Communications said they'd add another grand, making the total $8,000.

Here at The Clyde, a boy who volunteers that he's just turned 12, which means he has to pay a higher ticket price, gets rewarded with a bag of popcorn "for telling the truth."

And, when Lynn told men in the audience they shouldn't buy large drinks because the men's room toilet was broken, handymen tromped up the aisle with free repair on their minds.

Need is personified in a small town, she says. If a family's house burns, everyone can see the benefit of bringing extra clothes or blankets to help the family start over. Right now, there are neighbors from South Whidbey fighting overseas.

"I never should have doubted this community would make this drive such a success."

Blake Willeford, leaning on one of his projectors, rewinds a reel of film. He bought the theater from the original owners in 1972. (STEVE RINGMAN / THE SEATTLE TIMES)

A crowd gathers outside the Clyde Theatre in Langley last week. Many patrons chipped in to Operation Phone Home, raising thousands of dollars to buy calling cards for troops in Iraq and Afghanistan. (STEVE RINGMAN / THE SEATTLE TIMES)