Tim Noah is fitted with headgear between shots during a production of the kids TV show "How 'Bout That." (MARK HARRISON / THE SEATTLE TIMES, 1998)
By Diane Wright
Times Snohomish County Bureau

There's an interloper onstage at the Thumbnail Theater.

Behind the row of cast members, Chloë Irons-Asplund is discreetly pushing a half-size broom. But what she wants to do is act. You can just tell.

She's stretching out those arms, beaming to the back row of the audience. Of course, she hasn't said she wants to act, not in so many words.

She doesn't have many words yet. She's not quite 2 years old.

But in theater, you've got to start somewhere. And the cast just rolled with it when the towhead in the striped Oshkosh overalls got onstage during a recent rehearsal with Tim Noah and the cast of "A Kaddywompas Christmas."

Noah, a Snohomish resident, has become a household name like other legendary regional entertainers, including J.P. Patches and Stan Boreson, the "King of Scandinavian Humor," of whom Noah is a friend and fan.

But unlike entertainers who have bridged the decades while holding tight to their initial work, Noah's work has evolved significantly over the years.

With a gifted musicality and rock 'n' roll roots, he has always been a boomer-age pied piper: Elvis crossed with Sgt. Pepper, with some Willy Wonka thrown in.

But Noah has stayed current, his music capturing the imagination of two generations now. And he has found his mission: starting with preschoolers, to shepherd children through their elementary and early teenage years experiencing the joys of live musical theater.

"We didn't expect her to arrive," Noah said. "I think that's a good example for the kids to see; you go with what's happening and work with it."

"I'm going to have to bring her back in about year," said her grandmother Leslie Asplund, laughing. Asplund plays Madame Curmudge, the official in charge of keeping order in "A Kaddywompas Christmas."

In the show, everyone gathers at Gate 13 of Puddle Jump Airlines to go to parts unknown for the holidays.

"Everybody who comes through the door is a potential passenger," Noah said. "It encapsulates what our concept is for this place, a place where the community can come and share and enjoy theater very close up and personal."

As they wait for the plane to take off, Noah and the other passengers sing songs and tell stories, trying to lighten up Madame Curmudge. Oddly enough, each time she shows up on stage, she keeps changing.

"She slowly but surely turns into a rat," Asplund said. "So every time I come back on stage, I've got more fur."

Except for a Christmas medley, Noah wrote all of "A Kaddywompas Christmas."

The title song and "Christmas Don't Do Business with a Rat Like Me" are bouncy rock tunes. "Holiday Hop" is a takeoff on hip-hop, and "Wackbangklink 'n klang Town" is one of Noah's signature wordplay songs, set in Santa's workshop. There's a lyrical ensemble number called "It's Snowing" and other story songs. Though it all, Noah is a genial presence on stage, with star power to spare.

"I have a 17-year-old, and when he was a little boy," he was like Noah is onstage now, Asplund said. "He isn't afraid to let himself experience his own child; you can just see that. He brings the talent at a high level. He's really an excellent musician, but he allows it to happen in a child-friendly way."

For a children's entertainer, kids are a renewable resource. Just as Noah has learned to take the pulse of each generation, he also has had a lot of beginnings in his own life.

"I really just kind of do what I've always done," he said. "Even when I first started doing this, I just followed my instincts. I create things that entertain me, and I say things in my music that I want to hear be said."

Born in Seattle on Dec. 19, 1951, Noah grew up between Auburn and Enumclaw. He was the youngest of three sons and had lots of time to play in the woods and create an imaginary world.

"I used to ditch my brothers, get away from everybody and go build treehouses," he said. Though he hadn't studied or done theater in school, "I had always performed, writing my songs and singing. That went though so many phases. I was into rock 'n' roll, Elvis Presley, the Lovin' Spoonful, Roger Miller, The Beatles. I was just really into all the music of the day, and that was what I aspired to be: a singer-songwriter-musician."

Early influences included Walt Disney and Boreson; he watched Boreson on TV after school. "We've shared the stage, and I've had several very wonderful conversations with him. He's been very gracious with me, somebody I feel a strong kinship with."

For the first 25 years, Noah said, "I didn't know what children's music was; I was just singing my songs." He started playing in 1969 at a Tacoma coffeehouse run by Chris Lunn, an early mentor and founder of Victory Music, a guild that supports acoustic jazz, blues and folk music.

"From the very first, he was caring, warm, supportive, joyful and always open to working with other musicians," Lunn said of Noah. "His talent was obvious, both in his skills as a guitarist and writer-songwriter, and delivering it. He had it all, even at a young age. He wrote songs that were story songs."

Lunn said Noah has evolved in a number of ways, "but he never lost the basic qualities from the very beginning. He's made a profound impression on generations of children."

Said Noah, "It was a big boost for me and my original songs, playing to an audience of adults and a really nice following down there." Later, he went to California and played in a trio for months at the Drinking Gourd, a popular San Francisco folk club.

By then he was in his 30s, and he began to explore the potential of a new medium with his groundbreaking first video, "In Search of the Wow Wow Wibble Woggle Wazzie Woodle Woo." A re-release of the video, about the power of imagination, is due out on DVD.

"We wrote 84 songs in two seasons," Noah said of the show. "It was really great fun."

Noah has won kudos from the American Library Association and Parents' Choice magazine, and three of his songs have been on "Christmas in the Northwest" CD compilations.

In 2003 Noah moved to Snohomish, where he and partner Cyndi Elliott, an elementary-school music specialist with degrees in education and creative arts, have their teaching facility. Choosing the town partly for its vintage feel, partly to be near his 10-year-old son, Jude River Noah, in Lake Stevens, they founded the Thumbnail Theater in the auditorium of a historic Snohomish church, the Church of Christ Scientist.

Noah has had periods when he hasn't performed as much, by both preference and economic necessity. "I worked in construction for four years, until recently," he said. But in the past two years, Noah and Elliott have created a classroom for theater arts and dance, with public and private classes, performances and even a monthly open-mike night, at 7 on the second Saturday of each month.

"It's taking its own shape," Noah said. "With the help of our students, we're generating a lot of ideas, and we're taking ideas as they come to us."

Elliott's education background and Noah's performing skills seemed a natural fit when they began to collaborate two years ago. He was teaching guitar, and they shared their goals and vision in lessons.

When Elliott said she wanted to teach musical theater, "I went, 'Oh. Yeah,' " Noah said. "All sorts of light bulbs went on, and it just made perfect sense, all the years that I've been performing for kids, basically doing one-man musical theater."

As teachers and performers, they try "to recognize where someone shines, where someone has the greatest amount of either talent or just confidence, to spotlight that and give them a chance," Elliott said.

They continue to do school performances throughout the year, as well as fairs and festivals and private shows for Boeing, among others. Noah does not think an artist has to move to New York or Los Angeles to succeed. "In a way, it feels kind of contrived to me to say, 'OK, I've got to go somewhere else to do what I've developed here,' " he said.

"We've seen him perform since she was 3 years old," said Debbie Cooper, who has been bringing daughter Emily, 11, to voice lessons. "It's been absolutely fabulous. He's an amazing talent."

"I've been one his fans since I was 3, but I never thought I'd actually be doing shows with him," said Kelsey Cooper, 11, who plays Lila Mae Burnett, Mrs. Curmudge's maid.

Noah's characters, said 12-year-old Michael Moore, "become more expressive. You learn not to be embarrassed on stage. You're doing all these wacky things. Tim's a good guy."

One of Noah's songs says:

"They say you're only a kid with a big imagination

To dream the way you do

But plenty of kids who didn't listen to reason

Have made a dream come true."

"Having been a performer all these years, connecting with an audience and working with kids from the stage, we now have a place where kids are taking part," Noah said.

Having the kids view Noah as a colleague, not just a teacher, he added, "feels like success to me." 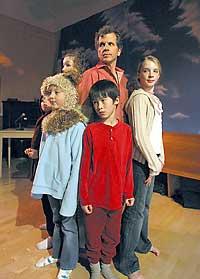 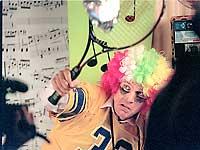 Noah deflects a flying bag of peanuts during taping of the kids show "How 'Bout That" at KOMO-TV studios in Seattle. (MARK HARRISON / THE SEATTLE TIMES, 1998)