Klein lets her hands feel out the specific areas of pain she says Rio alerted her to. (DEAN RUTZ / THE SEATTLE TIMES)
By Lisa Heyamoto
Seattle Times staff reporter
It took an hour and a half and a mason jar to make a believer out of Pam Thurston.

The hour and a half was a session with Polly Klein, an Issaquah animal communicator who let Thurston in on what had been ailing her 11-year-old black Lab, Rio, three years ago.

The mason jar held a two-pound, noncancerous tumor that a veterinarian later pulled from Rio's leg. The vet had said the tumor was harmless and wouldn't hurt the aging dog if it stayed put, but Rio's sluggishness and poor appetite told a different story.

"We didn't know what was wrong with her," Thurston said of Rio's mystery illness. "I thought, 'Well gosh, I'll try anything.' "

Turns out the tumor — not visible on an X-ray screen — was much bigger than anyone realized. It was also pressing against Rio's stomach, which accounted for her poor eating habits.

It would have stayed where it was, Thurston said, if the request for its removal hadn't come straight from, ahem, the dog's mouth.

"She was just like a puppy again after that," Thurston said. "I was just amazed."

One of just a handful of animal communicators in the region, Klein has been called everything from a Dr. Doolittle to a pet psychic, though neither title thrills her much.

Klein does not, she'll point out, actually talk to the animals at her practice, Tonglen Healing Arts. Nor does she look into a crystal ball to divine their preference for kibbles or bits.

"What I do doesn't feel very woo-woo-y," she said. "It feels like I'm having a conversation."

After seven years in the business, Klein has heard all the skeptics. And she's seen people overcome their disbelief in the face of results like Thurston's.

Take Barbara Kreemer and her cats, Annie, and the late Sam. She's been to see Klein so many times in the last few years that she can't even count them.

There was that time Sam kept using the new chair as a scratching post, or when he started spraying Kreemer's suitcases after she returned from a trip. Annie, for her part, kept going back to the house they'd moved away from months ago.

All it took was a little communication with Klein to get things straightened out, Kreemer said. In each case, her cats gave up their rebellious behavior the very next day. (Except for that chair-turned-nail file. When Sam really wanted to stick it to his humans, he knew right where to go.)

A typical session with Klein involves specific problems with specific questions like the ones Kreemer asked: Why is my dog suddenly running into the street? My cat is dying and I want to know if she understands what's going on.

Sometimes owners are just curious about what the heck their pets are thinking. The perennial favorite: What do they do while I'm at work?

Klein started her career as a family counselor in Seattle, specializing in children diagnosed with cancer. But her work with therapy animals got her thinking about the ways people communicate with animals, and after attending a talk by Penelope Smith, the most noted communicator in the country, Klein decided to give it a try. Now it's a full-time job that she says delights her every day, and has appointments booked for weeks.

She has a degree in psychology and was trained at Bastyr University as an animal craniosacral therapist, a subtle treatment that corrects imbalances in the craniosacral fluid that surrounds the brain and spinal cord. She's also a Reiki master and practices the alternative therapy that balances the energy in the body.

She had always felt a special bond with animals — what pet owner doesn't talk to cats or dogs as if they could respond at any minute? she asked. But her counseling background gave her both the tools and the clout to make it a profession.

"Everyone can talk with animals," she said. "It just comes more naturally to some people. I think that I'm one of the people that it comes naturally to."

Klein describes the communication as sending thoughts back and forth, kind of like a mental conversation. Sometimes she flashes a series of pictures to show the animal what she means, like envisioning the sun rising and setting to show the passing of time. Sometimes she makes her point through emotions, like showing a dog what it would look like if he were to get run over by a car.

Most of the time, the pet-to-owner problem is resolved through explanation: It would make your owner sad if you were to get hit by that car; that scratching is ruining the new chair.

Sometimes the animals blow her off — as in "Suuure, I'll stop doing that right away," Klein said.

Though animal communication does not fall within the margins of veterinary or animal-behavior science, it can be valuable for some pet owners, said Issaquah vet Jayne Jensen.

"There's a benefit to some people because they find comfort in it," she said, adding that she has a client who has used a communicator in California. "The good thing is that she feels good about it. It makes her feel better, and there's a lot in that."

She said anyone looking into a communicator should be sure of his or her intentions and be sure to continue to work with their vet.

Three years after Rio's successful tumor removal, Thurston's Lab was back in Klein's office and ready to talk. Klein and Thurston settled into chairs in the comfortable but otherwise ordinary room. Normally a corner-slinker, Rio showed uncharacteristic friendliness by lounging at Klein's feet, occasionally looking up at her as the conversation got going.

Thurston wanted to know some things about Rio's declining health: Why was she not eating her dry dog food, for example. Because she tried some steak and liked it much better, thanks.

Why does she only like the kibble when the neighbor dog comes around? Well, Rio apparently huffed, it's my food.

Thurston also wanted to know if Rio, who was bred for bird hunting, understood that the demanding activity was affecting her health. Also, was she keeping up with the sport because she loved it or just to please her owners?

Klein put the question to Rio, then smiled as she typed the answer on her laptop. Later, she'd explain that Rio got a little exasperated that she even asked.

"She thinks I'm slow for asking," Klein said. "She's not just doing it to please, she just loves it."

In the end, Thurston decided to take Rio on a coming pheasant-hunting trip to Montana and to continue letting her hunt. But she planned to keep a close eye on Rio's health so they'd both know when to ease up.

As for Klein, it was one more satisfied dog and owner, courtesy of a job that she admits can be seen as pretty bizarre.

"I've gotten to the point where if I go to a Christmas party and someone asks me what I do, I say what I do," she said. "People are more open than you'd think."

Pam Thurston has a treat for her 11-year-old Lab, Rio, after a session with animal communicator Polly Klein. It's "like she's spilling her soul out to somebody," Thurston said. (DEAN RUTZ / THE SEATTLE TIMES) 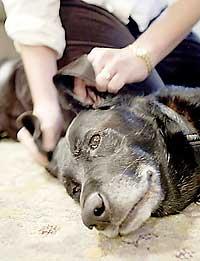 Rio seems to be saying "Ah, that feels good" as animal communicator Polly Klein runs her hands through her ears. (DEAN RUTZ / THE SEATTLE TIMES)