Sue Trevathan, right, and Rayna Holtz, both of Vashon Island, catch sight yesterday of a spotted sandpiper from Vashon's Manzanita Beach. Vashon Island bore the brunt of the Oct. 14 oil spill.
By Lynda V. Mapes
Seattle Times staff reporter
MANZANITA BEACH, Vashon Island — The cleanup guys in the yellow coats are gone. The lines of pom-poms, tumbling in the surf to cleanse the oil from these beaches, are gone too. So are the skimmers, the helicopters, all the trappings of things gone very wrong in this quiet little corner of the world.

The Oct. 14 spill of between 1,000 and 1,500 gallons of oil spread an oily sheen on Puget Sound as far south as the Tacoma Narrows, and as far north as Eagle Harbor on Bainbridge Island. A thin sheen of oil was reported on 15 miles of coastline, and an oily coating covered six more miles of beach. Vashon Island bore the brunt of the mess.

Now, as the island returns to normal, there is a sense of relief in the ordinary: the return of the winter birds; the golden glow of bigleaf maple leaves surfing the jade swell of the Sound. The gyre of the year calling the salmon home once more.

"It looks sort of normal," said Steve Caldwell, a longtime birder and island resident walking the beaches yesterday. "You'd have to look closely to know anything happened." But like others, Caldwell wonders about the long-term effects of pollution he can't see.

The state declared its cleanup of the oil spill that fouled the beach here complete Oct. 28. But the birds seemed to know sooner than that.

Winter birds, including dabbling ducks, have been arriving for weeks now, as the migration gets under way. The coves at Tramp Harbor and Lisabuela are alive with the quiet conversation of wigeons. The whistle of scoters flapping furiously to take off from the water, that sweet sound of the winter beach, is back.

Sport fishermen in waders stood hip-high in Quartermaster Harbor yesterday, as chum salmon rolled and leapt in their urgent return to the spawning grounds at Judd Creek.

Gerald Plancich, who's worked these waters for 30 years, hauled in one of his biggest catches of salmon ever, 26,000 pounds of chum, less than two weeks after the spill. He had to turn his purse seiner home early, he caught so many fish, so fast, just off Vashon's Point Robinson.

Here at Manzanita Beach, stained with oil not even one month ago, sparkling bands of white, broken shell wound along the curve of the beach, interspersed with opalescent blue mussel shells. Bits of emerald-green sea lettuce festooned clumps of living mussels, their byssal threads clinging tightly to clean pebbles at the surf line.

"This was one of the worst parts," said Rayna Holtz, a board member of the island chapter of the National Audubon Society, who walked Manzanita right after the spill. "It certainly has come back a lot. But you can't tell what is down below the surface."

Yesterday, shells were clean to the touch and the eye. But when Holtz dug into the sand with her hands and smelled it, there it was: a sharp, unmistakable petrochemical stench.

Sue Trevathan, one of a dozen Vashon residents who trained Saturday to walk stretches of the shore looking for dead or sickened wildlife, also dug into the beach yesterday, lifting her nose in distaste from a palm full of sand.

"What does this do?" Trevathan said. "Does it continue to be a lingering source of pollution? What are the consequences of tiny amounts of oil?"

Darkness and fog hampered a quick response to the spill, which was reported by a tugboat around 1 a.m. The spill occurred in Dalco Passage between Tacoma and Vashon. Cleanup costs totaled nearly $2 million.

Little known harm was caused to wildlife by the spill, agencies have reported so far. "We lucked out in so many ways," Trevathan said.

The spill was small, and it occurred before the migration of over-wintering birds was well under way. Some of the most sensitive shore areas of the island, such as Quartermaster Harbor, also were largely unscathed.

Quartermaster is home to more than 35 species of marine aquatic birds and is an important bird habitat. Drawn by shallow waters, pastures of eel grass and herring, thousands of western grebes depend on the sheltered waters of the harbor each winter.

Herring, which feed a rich web of marine life, also had not yet spawned.

Trevathan and 11 other Vashon residents will monitor beaches into the winter. 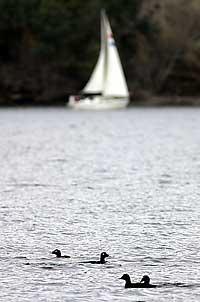 The aquatic birds are back, like these White-winged Scoters, a type of diving duck, spotted yesterday from Vashon Island's Manzanita Beach. (KEN LAMBERT / THE SEATTLE TIMES)