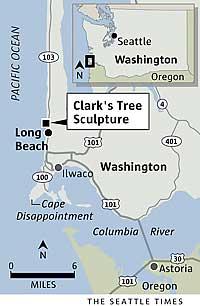 By John Macdonald
Special to The Seattle Times

LONG BEACH, Pacific County — A gravelly trail takes you up dunes and down to a lone windswept snag of a pine on a sandy hillock.

Three deer munch clover growing among the yellow dune grass that waves like wheat along the beach. The grass is studded with stubbly pines that residents fret are reclaiming the dunes.

Only when you reach the big tree do you see the pistachio green patina that tells you this 20-foot-tall ghost of a tree is really bronze, not wood. It's botanically correct from burnished roots to rough bark to realistic tufts of needles and cones tucked here and there among bare branches.

Carved in the bronze bark are these words:

This lonesome pine is an artist's interpretation of a long-gone real tree on which Clark actually carved his name. It helps commemorate the visit by the exploring duo of Meriwether Lewis and William Clark and their Corps of Discovery to this pencil-thin sliver of land between the Pacific Ocean and Willapa Bay.

While the sculpture that looks so much like a real tree was officially dedicated in an elaborate ceremony nearly a year ago, it's still the subject of a bit of a community dispute.

And a mysterious message in an ancient language engraved in the tree by the artist continues to puzzle visitors who make the trek across the dunes to explore it.

A monument in bronze

The 3,500-pound bronze tree stands about 50 yards from where the Pacific waters lap against the smooth sand and a quarter-mile west of beachfront neighborhoods.

The artist is Stanley Wanlass, now of Sandy, Utah, but who lived in the Pacific Northwest nearly 20 years and still owns 35 acres of beach property near the peninsula's tip. Another of Wanlass' bronze works is of Lewis and Clark and is displayed in a small park in downtown Long Beach.

When the members of the Corps of Discovery arrived near the mouth of the Columbia on Nov. 7, 1805, they were 18 months and 4,100 miles into their cross-country trek from St. Louis — up the Missouri River, over the Rocky Mountains and down the Columbia.

Their jubilation at having reached their ocean destination was tempered by the rapid approach of winter storms and concern for dwindling supplies and clothing that was literally rotting on their backs.

Historians say that had they arrived just a few weeks earlier, the chances of replenishing their supplies and clothing with the help of local Indians would have been better. While some Indians dropped by to trade, many already had moved inland for the winter.

The worsening weather also had dashed their hopes of running into trading ships that stopped frequently in summer months at the mouth of the Columbia.

Driving rain, winds and surging tides kept them cold and miserable for most of the 18 days spent on the north side of the Columbia in what today is Pacific County.

On Nov. 18, Clark and 11 men went on a three-day excursion to Cape Disappointment and north about four miles on the ocean side of the peninsula. Along the way they made notes of the plants and animals they encountered, including a beached gray whale, deer and a "buzzard of the large kind" with a 9.5-foot wingspan that we now know as the California condor.

The pine on which Clark carved his message — an action he recorded in his journal — is said to have been the northernmost distance the corps walked on the beach.

What became of the original tree is not known. It likely stood where the town now is, Wanlass said. But the dunes have continually expanded over the decades, widened by silt deposited to the north of the river mouth.

The monument was put among the dunes in an effort to more nearly replicate the scene Clark might have come upon.

Wanlass said he wanted to show the tree as it would appear 200 years after Clark's carving, "very old but still clinging to life and showing its hard life and history with its knurled roots and windblown branches."

The bronze tree was cast in Utah then trucked to the Lewiston-Clarkston area on the Snake River at the Washington-Idaho border. It was carried by barge down the Snake and Columbia rivers, stopping at several communities along the way for ceremonies.

Today, it sits on a grassy knoll, about a quarter mile from the west end of North 26th Street near the north edge of the town of Long Beach. But it might not be there for long.

A loss of site

In selecting the site, according to the local Chinook Observer newspaper, Long Beach city fathers felt they had an agreement with owners of the condominium resort at the beachfront street end to cooperate in providing parking for easy public access to the tree.

But with no firm agreement, in hand or anticipated, to provide enough public parking, it appears the monument may be uprooted this winter or spring and moved to a new beach home — site to be determined. One bid put the cost of the move at nearly $30,000.

Moving the tree also will require re-burying a time capsule containing a group photo and personal messages from town residents, a miniature bronze of the tree and other items.

All Wanlass will say about the mysterious hidden message he carved somewhere on the tree is that it's in Latin and asks a "haunting question that has poetically puzzled mankind since man could first contemplate his origins and fate."

Wanlass says he adds such cryptic messages to most of his works, although not always in Latin.

"Some will be figured out quite easily by those who care enough to participate."

In this case, he says, the message is on the outside of the tree and if you look hard enough, you can find it.