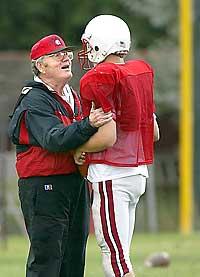 Keith Gilbertson Sr., a 1945 graduate of Snohomish High School, has coached at the school for 55 years. "It's like having a tiger by the tail I can't let go," he said of coaching. (MARK HARRISON / THE SEATTLE TIMES)
Q: How many years has Keith Gilbertson Sr., the father of the Huskies football coach of the same name, been coaching at Snohomish High School?

A: Fifty-five years! And since 1981, when he retired from teaching, Gilbertson has been an unpaid volunteer coach.

Gilbertson, 77, graduated from Snohomish High School in 1945. He returned to Snohomish in the fall of 1950 after getting an education at Washington State and experience coaching the Cougars' freshman team. His WSU playing days ended his sophomore year because of a head injury.

Over the decades, Gilbertson has helped thousands of boys and girls. These days, he is an assistant in football and girls basketball, which he switched to in 1996 after 30 years with boys basketball. In the spring, he runs a conditioning program for athletes of all sports.

Gilbertson was head football coach at Snohomish for three years in the 1950s, and the story goes that he lost his job when he disciplined some kids. He then coached the Panthers' boys cross-country team to two state titles and three runner-up finishes. He rejoined the football staff in the 1960s.

"It's like having a tiger by the tail — I can't let go," Gilbertson said last week of his love of coaching. "I really enjoy the kids."

Gilbertson has survived cancer, a stroke and a stretch of depression that a psychologist helped him lick. The depression struck after the death of his wife, Eileen, in 1995 and then the deaths of several friends. He isn't afraid to talk about the depression and hopes his candor will encourage others to seek help.

Last spring, I asked Keith Gilbertson Jr., whose two-season term as UW coach will end this month, the biggest thing he got from his father. He replied: "Just the enjoyment of young people, and the enjoyment you get from coaching them and helping them and seeing them improve. ... He certainly didn't do it to get rich." (Gilbertson Sr.'s starting salary in 1950 was $2,800 a year, plus $200 for being an assistant coach in three sports.)

The Gilbertsons are part of a Snohomish County tradition of coaches.

"When you look at where we're from — the Ennises, Lowerys, Prices, Ericksons and my own family — the boys all went into coaching," the younger Gilby said. "All of us followed in our father's footsteps."

Q: Does a team from west of the Cascades have a chance of ending Spokane's dominance in 4A boys cross-country at the state meet this Saturday in Pasco? What was the last "West side" team to win the big-school title?

A: Port Angeles and Auburn-Riverside have outside chances, but my pick is defending champion Ferris of Spokane. Mead and Eisenhower of Yakima are my next two selections.

"This will be one of the tight ones," said Mead coach Pat Tyson, who has coached 12 championship teams since 1988. "There is not a clear-cut favorite."

Eisenhower was the last team not from Spokane to win the title, in 1987. In addition to Mead's 12 titles, University of Spokane has won three times and Ferris prevailed last year.

The last winner from west of the Cascades was Blanchet in 1986, when it was in the big-school division. Since then, Blanchet (now called Bishop Blanchet) has won four 3A titles.

Q: What is history of high schools in Bremerton? There was East Bremerton and West Bremerton when I was growing up, and now there is just Bremerton High School.

Q: What do you think is the best size for a high school?

A: After talking to a variety of folks, I think the best size is 800-1,000 for a four-year high school. The advantages at this size include: 1) Students get to know each other and the staff; 2) A full academic menu, with such things as fourth-year foreign language classes, can be offered; 3) The school and its league can field a full spectrum of athletic teams; 4) Kids have a reasonable chance of making the teams of their choice, performing in a play or being involved in student government or other activities of their choice.

Have a question about high-school sports? Craig Smith will find the answer every Tuesday in The Times. Ask your question in one of the following ways: Voice mail (206-464-8279), snail mail (Craig Smith, Seattle Times Sports, P.O. Box 70, Seattle, WA 98111), or e-mail csmith@seattletimes.com.