By NANCY GOHRING
Special to The Seattle Times
In a tightly sealed room viewed only through a thick pane of yellowed glass, scientists dressed head to toe in identical white garments turn dials on complex machines and dip silicon wafers into tubs of chemicals. The "bunny suits," as the white garments are called, help keep contaminants as small as flakes of skin from entering the atmosphere of the impeccably clean room.

In a separate room and without a bunny suit, a chemist mixes potions and jots down formulas on a paper towel, which happens to be the handiest place to take notes. In the hallway, a researcher considers taking a break to challenge a co-worker on the pingpong table.

So goes a typical day within the walls of Lumera, a Bothell company that uses nanotechnology to develop next-generation communications and biotechnology devices.

But while this may describe the Lumera of the past four years, the future may look a bit different.

The company is in the midst of a series of critical transitions, the most disruptive of which may be one that takes it from research and development to selling commercial products.

At the same time, Lumera is turning a technological corner that it hopes will lead to communications and medical-research breakthroughs.

But, as with any company in transition, its fate hangs on a number of factors, including a fickle pool of investors and a potential customer base that has to be educated about its products.

At the heart of Lumera's effort is an emerging field of the tech business that uses nanotechnology as a tool to develop products.

"Nanotechnology is basically the science of dealing with the incredibly small," said Bob Petcavich, chief technology officer at Lumera. "If you were to take a human hair and slice that hair along its diameter a thousand times, one piece of that would be a nano piece of hair."

Companies learning to manipulate particles at the nano level can develop a range of products, including superfast telecommunications equipment, incredibly thin computer screens, pharmaceuticals, sensors that detect chemicals in the air and special telecom antennas.

"Nanotechnology is an amazingly broad subject," said Larry Dalton, professor of chemistry at the University of Washington. "It's basically like synthetic chemistry in that it's a concept of engineering a wide range of structures that have a diverse range of applications."

While Boston, Silicon Valley and Southern California are considered the top regions for nanotech, the Pacific Northwest is on the map and may grow into a more significant presence.

In the Seattle area, the Fred Hutchinson Cancer Research Center and Boeing are actively pursuing nanotech's potential, and companies such as CombiMatrix in Mukilteo and NanoString Technologies in Seattle are using it.

In Eastern Washington, the Pacific Northwest National Laboratory, a Department of Energy lab in Richland that does nanotechnology research, adds credibility to the region's work.

Still, while being called a nanotech company implies cutting-edge, it can also be a curse.

"It's a tragedy. There's a lot of confusion and hype," said Dalton. The overhyping became apparent when Nanosys, a Palo Alto, Calif., startup that developed into the golden child of the sector, canceled its initial public offering in August, blaming adverse market conditions.

In fact, the nanotech moniker can be the biggest challenge for startups looking for financing, said Peter Conley, director of equity research at Analytiq Group, which specializes in nanotech investment research.

"If there is a pivotal issue, it has a lot to do with either shaking the nanotech descriptor or otherwise demonstrating that they're sound businesses on their own merits," he said. "That's a tall order for a lot of development-stage companies that have new technologies."

Lumera got lucky and executed its IPO two weeks before Nanosys canceled. At the time, Lumera had already raised $24 million in funding, including $8 million from Cisco Systems. Total funding so far, including the IPO, has reached $68 million.

Lumera's stock dipped when Nanosys pulled its IPO but has steadily gained since, finishing Friday at $8.02 a share, up 40 cents.

Lumera was born as a subsidiary of Microvision, the Bothell-based developer of displays and imaging systems. With the IPO, it became a separate company, and Microvision remains a significant shareholder.

Conley suggested companies like Lumera may be more successful than others because they "use nanotech as an enabler, but in and of itself may not be pure nanotech science."

Lumera Chief Executive Tom Mino agrees that having products gives it a firmer foothold in the market. "Our products are solutions, not nanotech research samples. They are actually working," he said.

Added Dan Lykken, vice president of sales and marketing, "I think the investment opportunities are good if you can demonstrate near-term product."

Lumera is commercially marketing an antenna for wireless systems. It is also selling small quantities of a biochip for customer evaluations, as well as components that can be used in networking equipment.

Some of its communications products, including components used in making chips, should be commercially available in 18 to 24 months, and additional biochips for different market segments are expected to hit the market in three to four months, said Mino.

But even Mino admits that doesn't mean the road ahead will be easy. The biggest challenge he envisions is market acceptance.

"This is a new material. It doesn't have the 15-year history of being used in systems," he said.

But he thinks Lumera is in a good position because of the patents it owns. The company has worked to accumulate as much of the intellectual property around its processes as possible.

It acquired the intellectual property and technology from the University of Washington. Lumera also has exclusive rights to certain technology developed at the university and helps fund that research. In turn, the UW is a Lumera shareholder.

The relationship with the UW, and particularly Dalton, lends Lumera credibility, analyst Conley said. "They have a certain amount of academic star power, as Dalton is highly regarded," he said.

Observing Lumera scientists in the lab unveils the nature of the work.

Raluca Dinu, a manager, demonstrates a silicon wafer Lumera hopes will enable doctors to perform complicated tests more easily. Using nanotechnology, the scientists make the surface of a chip either resistant to liquid or attractive to liquids, or both.

Dinu handles a large 6-inch round chip in a way that makes the effect visible. The chip has been treated so that 384 pinhead dots attract water while the rest of the area repels it.

When Dinu dips the chip in water, it comes out with neat rows of 384 dots of water (an actual chip used by a customer would be postage-stamp size).

The phenomenon can be useful in medical tests. For example, a lab could place target substances on each spot that react only when they come in contact with another specific substance. The targets could indicate, say, different allergens.

After a technician flows a drop of patient's blood over the chip, a third substance washes over it and causes dots that have reacted with the blood to glow. The glowing dots indicate which substances the patient is allergic to.

Other companies make similar types of chips, which cost more and can't fit as many spots that can attract liquid within the same small area, said Petcavich, the chief technology officer.

Outside the lab, Petcavich shows off a wand Lumera calls the Biosaber. At the end of its handle is a 3-inch fiber-optic strand that looks like a slightly thicker piece of string.

Using nanotechnology, Lumera can place targets along the surface of the strand that indicate the presence of cocaine, for example, or diseases such as diabetes when the strand is dipped into a urine or a blood sample.

After flipping a switch on the handle, the strand glows in spots, indicating presence of the substance. A doctor could test for well over 100 reactions with a single wand, cutting the time and cost required to perform that many tests, said Petcavich.

Lumera is working on other potentially dramatic technology — a commercial application that would enable customers to manufacture human or other proteins on the surface of a chip.

Typically, when proteins are removed from an organism, they change and make it hard for researchers to study how they behave. With the technology, researchers would reduce their costs and save time because they wouldn't have to use animals, Petcavich said.

Beyond biotech, Lumera has made some breakthroughs in telecom products.

It's well-established that using light rather than metal to transfer data can offer benefits. Telecom companies today use fiber-optics technology to send data on light waves rather than over copper wires, increasing speed and reducing noise.

Lumera applies the same concept to the connectors between transistors on chips. Those connections are currently made of copper or aluminum. If optics are used, the communications between transistors speeds up, increasing overall speed and decreasing the size of the chip.

"Chips can get smaller and smaller and extend Moore's Law," said Dalton, referring to the theory that says computing power essentially doubles every couple of years or so. In addition, using photonics helps solve the problem of heat created in today's chips.

Dalton's work in this area has attracted financing from chip giant Intel.

Other companies also make optical switches, which speed up data transfer, but Lumera says the materials it uses result in a faster product.

If Lumera can cross the barriers it faces, the products the company is developing have the potential to shift the way engineers and designers think about fabricating solutions to problems, said Mino.

Once that shift is made, the potential for Lumera is great. "The market moving forward for these things is huge," said Mino.

Anna Barklund holds a wafer containing 60 optical modulators built using nanotechnology the science of the very, very small in a specially lit "clean room" at Lumera in Bothell. Lumera is one of the companies and institutions putting the Pacific Northwest on the map as a nanotechnology leader. (KEN LAMBERT / THE SEATTLE TIMES) 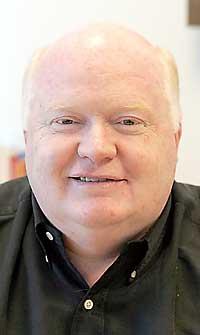