Passengers offload from one of the foot ferries run by Kitsap Transit between Port Orchard and Bremerton. The fare is $1. (HARLEY SOLTES / THE SEATTLE TIMES)
By Susan Gilmore
Seattle Times staff reporter

BREMERTON — Consider it a cheap date.

For just a handful of dollar bills, I traversed the Kitsap Peninsula by public transit, touring the new waterfront development in Bremerton, visiting antique shops in Port Orchard, stopping by a shopping mall in Silverdale, walking — and shopping — in the quaint Nordic-heritage streets of Poulsbo, enjoying the bus-window view from the Agate Pass Bridge, and catching a Seattle ferry home from Bainbridge Island.

All without getting stuck in traffic.

It's one of the best bargains around, particularly with the soaring price of gasoline.

Where else can you see what Poulsbo knitters hope will be the world's longest scarf, now growing in a tiny coffee shop? Where else can you ride the last surviving ferry that's been in continuous operation from the fabled Mosquito Fleet? Or watch new fountains at the Bremerton Harborside project shoot water in all directions — to music?

All I needed was a few bucks, a fistful of transit schedules and good walking shoes.

I caught Kitsap Ferry Co.'s 7:50 a.m. passenger boat from downtown Seattle to Bremerton. The fare on this new privately operated ferry is $14 round-trip, more than double the $5.70 charged on Washington State Ferries. But besides shaving 20 minutes off the crossing, this boat had coffee and pastries for sale, while most state ferry galleys are dark. We stepped off the boat to the words, "Thanks for riding with us. Have a good day." When have you heard that on the state ferries?

After buying coffee at the new Bremerton Starbucks — the first in the city's downtown core — I walked through the just-opened Harborside development.

In July the city gathered for the grand opening of the project, which includes a conference center, a newly opened hotel, a Cold Stone Creamery, all part of a major revitalization of a downtown that has been known for its boarded up storefronts and struggling businesses.

A new government building is opening, and next spring construction will begin on 200 waterfront condominiums. Puget Sound Naval Shipyard is building a 1,000-car parking garage and donating a piece of land to the city for a new downtown park. In all, there's $500 million in development over the next few years.

Not bad for a city that hadn't seen a new building downtown in two decades.

Just down the steps from Harborside at the edge of Sinclair Inlet, weekend visitors can tour a famous retired Navy ship, the USS Turner Joy, which has been restored to reflect its looks during its active years between 1960 and 1982. The destroyer earned fame for its part in the Gulf of Tonkin incident, which escalated U.S. involvement in the Vietnam War.

From the modern Bremerton Transportation Center, which opened a few years ago as a center for ferry and bus links, I next boarded the little foot ferry to Port Orchard, dropping a buck in the honor box.

This 10-minute, one-mile run is served by the Carlisle II, a historic boat built in 1917 that was part of the "Mosquito Fleet," the thousands of steamships that steamed through Puget Sound from the 1850s to the 1930s. The fleet went out of business in the 1930s when roads and rail replaced the boats, but the Carlisle survived and is now part of the Kitsap Transit system.

Having just undergone a major restoration, the boat is a floating museum with old Mosquito Fleet photos.

At the Port Orchard ferry dock I noticed a sign: "Please let the deckhand know if you want to connect with Kitsap Transit's No. 11 crosstown express bus in Bremerton. The crew can radio the bus driver to hold for foot-ferry passengers." Wow, I thought, the bus would wait for me?

On to Port Orchard

In old downtown Port Orchard, antique stores line the main street and on Saturdays, until the end of October, there's a farmers market.

Kitsap Harbor Tours offers trips from Port Orchard to Tillicum Village on Blake Island in the summer, but year-round visitors can charter boats for tours or parties, starting at about $200 an hour.

In Port Orchard you can visit the Log Cabin Museum and the Sidney Museum (Sidney was the town's original name, named for founder Frederick Stevens' father). Both are within walking distance of the ferry dock and both portray family life throughout Port Orchard's history. Or you could hop on a Kitsap Transit bus (Route 6, for another $1) and visit the Victorian Tea Room, with its restaurant fare and collectible dolls.

The food is so good, said Melody Sapp of Port Orchard Chamber of Commerce, that even the men on the chamber board like to eat there.

While only 8,000 people live in Port Orchard, the schools draw from such a large area that South Kitsap High School in Port Orchard is the largest three-year high school in the state.

One of the most unusual stops in Port Orchard is the Navy Nurse Museum, open by appointment only to Navy nurses.

I put another buck in the ferry box and rode the boat back to Bremerton, collecting a transfer to board a Kitsap Transit bus. I hopped on the Route 14 bus, which took me to Silverdale's Kitsap Mall (there's no direct bus from Bremerton to Poulsbo). After waiting just a few minutes and resisting the temptation to shop, I transferred to the Route 32 bus, without paying more. It dropped me off in downtown Poulsbo.

There, in the Poulsbohemian Coffeehouse, knitters gather every Thursday night to try to break the record of knitting the world's longest scarf.

So far, working both ends of the scarf, the team of knitters has finished 150 feet, and they figure it could take about 100 knitting years (54 years knitting both ends) to break the record of 21 miles held by Ireland. (But, the knitters say, Ireland cheated by patching together its scarf, rather than knitting it in place.)

The scarf will go for 22 miles — that's from the coffeehouse to proprietor Marianna Mears' house in Hansville.

"One day we were sitting around a table and were thinking. We knit, why not knit the world's longest scarf?" said Emily Alexander, who works at Poulsbohemian, where the scarf is on display. Using donated yarn, the knitters have been teaching their craft. Either they'll break the record, "or we'll win the prize for the dumbest idea ever thought of at a coffeehouse," Alexander said.

Poulsbo is filled with quaint, artsy shops and is home to the famed Sluy's Bakery, which invented Poulsbo Bread. And where else can you spot a sign advertising lutefisk TV dinners? I even plunked down $4 at a used book store to buy an old Nancy Drew book, my favorite series from childhood.

Even in the fall Poulsbo is filled with tourists. At Poulsbo Pasta Company, where the menu is stamped on the plates, I lunched on one of the best pasta meals I've ever had: a pesto dish with homemade noodles.

I waited for the Route 32 bus on old Poulsbo's main thoroughfare, Front Street, plunked another dollar in the bus coffers, got a transfer and rode it up the hill to the Poulsbo Transfer Center, where I transferred to Route 90, taking me in plush comfort to the Bainbridge Ferry Terminal, 20 minutes away.

In all, I'd spent only $3 to tour Kitsap County, plus the ferry fare to get there. The ride home on Washington State Ferries — which collects passenger fares westbound only — was free. Sure, I'd visited most of these towns before, but always in my car. I had no idea how easy and relaxing — and cheap — it would be to do it by bus.

At the end of my day I just wished I'd had time to transfer to Jefferson Transit in Poulsbo for its one-hour trip to Port Townsend. Hey, maybe next time ... 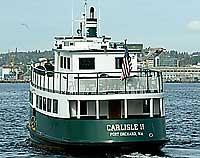 The historic ferry Carlisle II, which runs a round trip from Bremerton to Port Orchard twice an hour, offers a scenic link on a tour of the Kitsap Peninsula. (HARLEY SOLTES / THE SEATTLE TIMES)

Ferries dock at the waterfront, which includes the Bremerton Transportation Center, a new hotel and convention center, and a promenade. (HARLEY SOLTES / THE SEATTLE TIMES)

At the Poulsbohemian Coffeehouse in Poulsbo, patrons are knitting what they hope will be the world's longest scarf 22 miles. (HARLEY SOLTES / THE SEATTLE TIMES)