KIRKLAND — The questions were answered as fast as Jerry Rice can run.

Yes, he is confident he can still fly, even at age 42.

Did the Seahawks actually acquire the legendary Rice? Yes. His arrival at team headquarters yesterday afternoon made it official.

Will he really wear the most famous uniform number in Seahawks history, the No. 80 that belonged to NFL Hall of Famer Steve Largent? Yes, and he received Largent's permission to do so.

Will he get quality playing time even if he's not a starter? Yes, and coach Mike Holmgren made that clear.

Rice, the 20-year veteran widely regarded as the best receiver ever to play pro football, became a Seahawk with the finalization of a trade with the Oakland Raiders before yesterday's NFL trade deadline.

"I just want to contribute," Rice said. "With the core that they have here, this team is already established. It's just like I'm an addition. If I'm the guy that can just come in and really take these guys to the next level, then that would be wonderful."

Said Holmgren: "By adding Jerry to the puzzle up here, I really believe with all my heart that it's going to help us this season. Immediately."

Sitting at a table before the media, Rice called the chance to play for Holmgren again "an opportunity of a lifetime." The grin on Rice's face never left with each response to a question, and the twinkle in his eyes was as bright as the diamond-studded hoop earring in his left ear.

Perhaps no single gesture was as poignant as the one Rice made for a photo opportunity. Before taking questions, he stood in front of reporters and held up a blue Seahawks home jersey with the number 80 and his last name already stitched. No Seahawk has worn the number except Largent, who played from 1976 to 1989; in 1995, No. 80 became the only number to be officially retired by the team.

Rice spoke with Largent and received the former U.S. congressman's blessing to wear the number.

"It's an honor for me to wear that No. 80 out of respect to him," Rice said. "When he said that, man, it sent chills through my body because I know what he has done for this city. You think about the Seattle Seahawks, you think about Steve Largent. And for him to just say that, without any hesitation, that I could wear his jersey, that meant the world to me."

Rice had to hold up the jersey one more time to look at it after his news conference was over.

Rice was sold on Seattle when he spoke to Holmgren about the possibility of a trade. He wanted out of Oakland because the Raiders simply weren't throwing him the ball much this season, and Rice believed he still had plenty to contribute. Rice and Holmgren also have a history together, as Holmgren was the San Francisco 49ers' quarterbacks coach (1986-88) and offensive coordinator (1989-91) for six seasons while Rice was there.

In 2001, Rice met with Holmgren during free agency about the possibility of signing with the Seahawks. But Holmgren indicated that Rice would be a third or fourth receiver, and Rice felt he could still start. So Rice went across San Francisco Bay to Oakland.

Rice will be in the rotation immediately, Holmgren said. The Seahawks play at Arizona on Sunday. In order to make room for Rice on the roster, the Seahawks released rookie punter Donnie Jones, who punted last Sunday at New England. Jones could be re-signed to the practice squad as soon as today.

Yesterday, the NFL's all-time leading receiver and oldest active non-kicker or punter arrived in town with wife Jackie to celebrate the newest chapter in Rice's career. He'll move from his familiar flanker position to split end for the Seahawks, the same position currently occupied by Koren Robinson. The position change offered further indication that Robinson might soon be suspended by the league for a violation of the NFL's substance-abuse policy, but Holmgren made no mention of that.

Darrell Jackson and Robinson — barring a suspension — are still the Seahawks' two starting receivers. As for Rice, Holmgren said there is no question he will contribute.

"He will get his hands on the ball," Holmgren said. "He will be a part of this offense. I didn't bring Jerry in here, and we didn't agree to this, for him not to play." 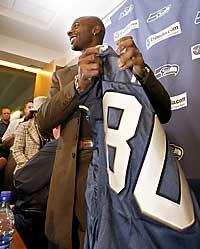 Jerry Rice received permission from Hall of Famer Steve Largent to wear No. 80, which was retired by the Seahawks in 1995. (ROD MAR / THE SEATTLE TIMES)