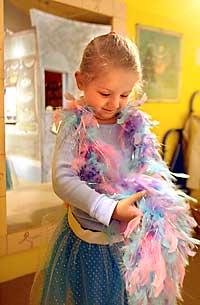 Tatyana Mroz, 4, tries on some clothing at the display from the "Ballerina" book by Peter Ss. (GREG GILBERT / THE SEATTLE TIMES)
By Stephanie Dunnewind
Seattle Times staff reporter

Several communities are also creating their first child-specific spaces: KidsQuest, the Eastside children's museum, will host a temporary exhibit for the first time later this month. Organizers have said "next year" for its planned opening at Factoria Mall for years but now insist it will open by the end of 2005.

The Northwest Association of Youth Museums boasts 28 museums on its roster in Oregon, Washington and Canada, up from seven in 1993, said Bev Wiltshire, operations manager for the Whatcom Children's Museum in Bellingham.

The Whatcom museum also plans to move and expand to a new building, shared with the art museum, in a few years.

Like most nonprofits, children's museums tightened budgets to deal with the economic downturn, said Wiltshire, who served as the association's coordinator this past year. While it was more challenging to raise donations and grants, "as far as attendance is concerned, it just goes up and up," she said.

Attendance at The Children's Museum in Seattle is up 8.4 percent over last year as of the end of August, said executive director K C Gauldine. (It receives about 200,000 visitors a year.) Memberships also jumped 46 percent after several years of decline.

Directors credit parents' increased interest in young children's development for museums' growth. "We've realized, with inroads into the study of the human brain, that a stimulating and educational environment for young children is a must," Wiltshire said.

Both parents and donors now recognize that children's museums are more than entertainment, Gauldine said. While many local institutions, such as the Pacific Science Center, offer interactive activities for kids, children's museums focus on learning through play. Nearly all include role-playing areas such as child-sized restaurants or medical offices; construction areas for building with different materials; and cultural exploration through art studios, puppets or a theater stage.

As a group, children's museums are expanding beyond traditional visits and birthday parties with such programs as Seattle's Imagination Studio on Wheels, an art outreach program that visits libraries, schools and Boys and Girls Clubs; Tacoma's emphasis on parent education with a school-readiness exhibit; and Everett's kids' night out.

The Children's Museum in Snohomish County changed its name to Imagine Children's Museum, moved out of its storefront location into a former bank and more than doubled its exhibit space. The $4.75 million expansion, with 10,000 square feet of new exhibits, opens tomorrow.

The renovation bumps the museum into the same league as Olympia, Seattle and Portland as a regional attraction. It expects attendance to jump from 33,000 visitors a year to more than 50,000. Staff are already planning a second phase of construction to create a fenced outdoor space on the building's roof.

Brightly painted "playhouse" exhibits include a cafe, wildlife clinic and theater stage, as well as a treehouse with wooden bridge. Unique to this museum is a bank room with real drive-up window and vault, a 30-foot airplane with a Boeing 777 cockpit and a farm exhibit with a "cow" that can be milked, a tractor to ride and baby chicks.

Sure to be popular is a water play area with a table where children can control currents and move boats. There's also a small space with a foam sand castle reserved for infants and toddlers.

Downstairs, visitors will find a construction zone with hard hats, tool belts and Maxamec toys that allow kids to build child-size creations. Next door is an art studio.

The old museum was mostly rooms with stuff in them; the new one was designed specifically as a children's space with themed areas representing Snohomish County. A fiberglass mountain, for example, towers over the train area; the water play room is fronted by a mock ferryboat. Even the coat room is decorated with wall murals of firefighters.

When the Children's Museum of Tacoma revamped its small space this fall, it wanted to test a literacy-based exhibit that "brings a good book to life," said executive director Tanya Andrews. It used a traveling display of children's book author Peter Sís' original artwork as a platform to develop "Dream Maze," an interactive exhibit based on his picture books.

Children can don capes, load cargo and lift a flag on the Santa Maria ("Follow the Dream: The Story of Christopher Columbus"); dress up like ballerinas ("Ballerina!") or firefighters ("Fire Truck"); and check out different nationalities' food in a square area inspired by the diverse neighborhood block in "Madlenka."

It also created a play village with a post office, construction room with paint brushes and hammers, and house with a play washing machine, laundry line and table. Its popular garden, veggie stand and café received a Spanish-style update.

"The exhibits are a step above what we had before," Andrews said.

With attendance about 31,000 visitors last year, Andrews hopes the new exhibits will attract a broader audience. The museum is currently raising money for an expansion and renovation but hasn't announced a target opening date yet.

All the activity around the region might turn eyes toward Seattle's flagship museum, the Northwest's largest in size with 22,000 square feet of exhibit space. It celebrates its 25th anniversary this year.

Since its $4 million expansion nearly a decade ago, most of the permanent exhibits remain the same. Indeed, when the museum conducted market research last fall, the message from visitors was "they wanted things to change," Gauldine said. "They wanted new exhibits on a regular basis."

Because it's so expensive to change permanent exhibits, Seattle removed "Time Trek" to expand its temporary exhibit space. It will host popular national traveling exhibits such as "Arthur's World" next spring and "The Magic School Bus" next fall.

It also dropped plans to start an Eastside museum and will instead focus resources on improving its Seattle Center site. By the end of 2006, it hopes to triple the size of its Discovery Bay for infants and toddlers and refurbish Cog City.

It's also upped its "partnerships." Its Kidz Radio exhibit, for example, has new sponsorship by Radio Disney. "Our exhibit is now just like walking into a Radio Disney DJ booth," notes its latest newsletter. Radio Disney will also host a kids karaoke event Oct. 22, with future DJ workshops on the way.

For three weekends in November and December, the museum's special activities will be "PCC Kids Pick," where kids can sample new food and personal care products sold at PCC Natural Markets and vote on them.

Volunteers from the Bainbridge Island museum, located in downtown Winslow, started renovating its 3,700-foot space last year. In the two years since its inception, organizers have relied on more than 100 volunteers but now plan to hire professional staff.

It hopes to open in March with its first exhibit, the Zany Rainy Forest, which it purchased from the Whatcom children's museum. Other areas will include a theater, creative arts center and reading nook.

Organizers of KidsPort Children's Museum hope to find a space in downtown Bremerton in the coming year and open in the next couple of years, said president Terri Gleich. Its two traveling exhibits, "Amazing Magnets" and "Ping! Pop! Ka-boiiiing! Discover Sound," have reached hundreds of children in Kitsap County through class presentations, library programs and festivals.

From Interstate 90 eastbound, take the Richards Road/Factoria Exit (Exit 10B). At the stoplight, turn right onto Factoria Boulevard Southeast.

From southbound Interstate 5, take Exit 105-A. Follow 14th Avenue through the tunnel to Capitol Way. Turn right on Capitol. At next light, turn left on 11th Avenue.

Mountain forest with mini climbing wall; Cog City with mazes and pulleys; a "neighborhood" with restaurant, store, theater and Metro bus; Mindscape, a computer area for older children; and a sea-themed padded area for tots. There is also a drop-in art room.

The museum will host KidFest Oct. 22-24 with special activities to celebrate its 25th anniversary.

From Interstate 5 south, take the Tacoma city center exit (also Interstate 705 north). From I-705, take the "A" Street exit. Turn left on 11th Street and then right on Broadway.

Ashton Barton, from Tacoma, peers though a telescope in the "Starry Messenger" display at the Dream Maze exhibit at the Children's Museum of Tacoma. (GREG GILBERT / THE SEATTLE TIMES) 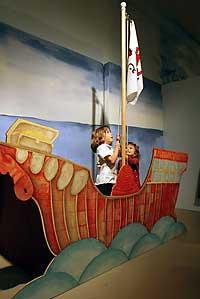 Sisters Evelyn, 5, and Kathy Yielding, 2, hoist a flag at the Christopher Columbus display at the Children's Museum of Tacoma. (GREG GILBERT / THE SEATTLE TIMES)