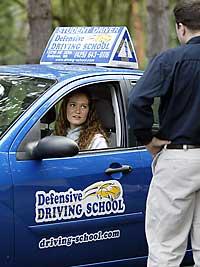 J.C. Fawcett, standing, an instructor at Defensive Driving School in Bellevue, talks to student driver Caitlyn Wright, 17, of Redmond. Wright looks forward to the convenience of doing errands on her own. (DEAN RUTZ / THE SEATTLE TIMES)
By J.J. Jensen
Seattle Times staff reporter

Getting a driver's license is a rite of passage for teens, and a big sign to parents that their kids are growing up really fast and are ever closer to leaving home, said doting Redmond mother Holly Wright.

So, a few months back, when it was time to find a driving school for her 17-year-old, home-schooled daughter, Caitlyn, she wanted to make sure it was a company she believed was trustworthy.

Through chats with parents at her church, she learned other children had felt at ease at Bellevue's Defensive Driving School, and in talking with the school's mild-mannered administrator, J.C. Fawcett, Holly felt she'd found "someone who you feel comfortable letting your child be with on the road."

Officials with the state Department of Licensing (DOL) and Office of Superintendent of Public Instruction (OSPI), which oversee and regulate commercial and school programs, respectively, say getting other parents' and kids' feedback is a good way to choose a driving school. But there are even more steps parents can take to identify the right traffic safety course — a requirement for teens who want to get their license before they're 18.

"I think most parents don't believe they have a role outside of paying," said Tana Cochrane, DOL's program manager for commercial driving schools. "It's important they take an active interest," she said, just like with a regular school.

But unlike a regular school, she added, "they're behind a 3,000-pound object that can do damage if they're not properly trained."

Many parents who took driver's ed (formally known as traffic-safety education, or TSE) at their high school when they where kids are often surprised to learn not all schools offer it these days.

Since 1963, the state had been paying about one-third of driver's-ed costs in public schools. In recent years, however, the Legislature cut funds for these programs at high schools, leaving school districts and families to cover costs.

Also, in 2002, the state shifted regulation of commercial TSE schools and instructors to the DOL, a responsibility it once shared with OSPI. Now, OSPI oversees things like curriculum, instructor licensing, inspecting vehicles and complaints at high schools only, while DOL oversees similar functions at commercial schools.

Whether teens take driver's ed at their high school or a commercial school, there are similar guidelines to follow and concepts to learn.

Students must be at least 15 years old to enroll. They must also receive a minimum of 30 hours of classroom instruction and four hours of behind-the-wheel time — the lowest requirements in the U.S. among states that require classes for drivers younger than 18. Additionally, OSPI requires four hours of "observation" time with the student in the car, but not necessarily driving.

The curriculums in the DOL and school-district programs differ, but many basic concepts, such as automobile operation, managing space around the vehicle to avoid conflicts, and understanding signs, signals and intersections, are the same. Curriculum requirements are the same at all DOL schools, while school districts may have their own locally written curriculum, in addition to OSPI's 27 "realistic levels of efforts."

Requirements for instructors differ some, too. All must go through a state background check and have at least 60 hours of training. OSPI also requires instructors to take continuing education courses.

When it comes time to choose a school, while many teens may want the quickest, easiest course they can find, OSPI and DOL officials agree it's not a decision that should be rushed.

"Money should not be the driving factor," Cochrane said. "The most expensive will not necessarily give you the best education."

Classes at local commercial schools typically cost between $200 and $500. On average, most high school classes are about $275 to $325.

Before enrolling a teen in a course, parents should drop by the school and meet with an instructor or owner. "The general thing is to be an informed parent," Cochrane said. "Look at the learning environment. Is it in a building that's conducive to learning?"

Other questions to ask, say Cochrane, and Dave Kinnunen, OSPI's program supervisor for traffic safety education and pupil transportation, include:

• Is the curriculum available for review?

• Can parents ride along on drives, or sit in on classes?

• What's the overall focus of the course? Have instructors and owners given their definition of "defensive driving"?

• Does the school use a textbook?

• Is there community involvement? Does the program bring in speakers like local police officers and representatives from Mothers Against Drunk Driving or Students Against Destructive Decisions?

• Does the program suggest things for parents and teens to practice together in the family automobile?

Also, parents should talk to other parents or teens who've recently completed a course. Ask them if classes rely heavily on movies, whether instructors assign homework and interact with students or if the school lets students out early.

Regardless of where teens take driver's ed, prior to receiving their intermediate license — the license given to teens under 18, with limitations on when they can drive and the number of people allowed in their vehicle — they also must get at least 50 hours of adult-supervised driving practice, including 10 hours at night. Time behind the wheel in a traffic-safety class counts toward this, but, Cochrane said, "the thing parents don't realize is that they play a real big part. ... If parents aren't fulfilling their obligation [of driving with their teen], four hours is not a significant time behind the wheel."

Holly Wright, the Redmond parent, said her biggest role when riding with her daughter is to provide "a good environment so she can grow and develop." She also tries to point out what she sees other drivers doing wrong.

"We see people do stupid things, and we say what would be the right thing to do. Be constructive rather than a dictator. Make it a happy experience."

Said daughter Caitlyn, who'll be getting a 1995 Mustang: "I think the best part will be the convenience of doing errands and going places on my time. When I have to rely on my parents, it's like, 'Ugh... ' "