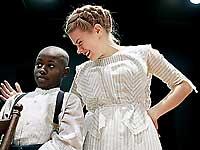 Red states or blue states. Retro or metro. Tweeners or seniors. NASCAR dads or soccer moms. The United States may still be called one nation indivisible, in our pledge of allegiance. But the culture is being divided into smaller and smaller wedges by pollsters and pundits, marketing gurus and media executives.

We've become a nation of splinter groups, defined by our disparate tastes in politics and religion, fashion and music.

Hear them repeated often enough, and the reductive labels start to stick. Yet amidst all the social segmenting, many of us long for some common ground.

Are there, for instance, still stories that can speak to the country at large? Meaningful works of art that can bridge our divisions, and reach beyond our differences?

Seattle's Intiman Theatre is testing that notion with a new five-year program, The American Cycle. An attempt to find common ground through staged classics of American literature, the cycle kicks off this week with Thornton Wilder's 66-year-old play "Our Town," one of the most-produced American dramas of the past century.

Yet "Our Town" is a logical choice to open the series because "it's about what brings Americans together, not what pulls us apart," declares the show's director, Intiman artistic head Bartlett Sher. "I see it as part of the great American transcendental tradition of Emerson and Thoreau. It connects us with things at the heart of America — like our sense of fairness and rightness, our ability to care for each other."

Sher and Intiman managing director Laura Penn want people to come see "Our Town," but also to engage with the script on other levels. The theater has linked up with numerous "partner" organizations (including the Seattle Public Library and Leadership Tomorrow) to instigate a civic discourse via public readings, discussions, school programs and other forums.

Explains Sher, "I'm trying do some red and blue cross-tribal pollination here. I don't like the stereotype that arts patrons are all Volvo-driving suburbanites, and NASCAR dads never go to plays. There are lots of forces out there trying to divide us. I'm trying to cultivate connections."

Can a sepia-tinted drama such as "Our Town" be a vehicle for this coming-together?

Wilder's play offers a time-capsule portrait of an archetypal New Hampshire hamlet, Grover's Corners, from 1901 to 1913. And those who know the script only by reputation may just assume it belongs in the "Nostalgia" file.

True, "Our Town" is by turns a genial and plaintive chronicle of smalltown New Englanders in a period very unlike our own. And the fictional Webb and Gibbs families weather common experiences: a courtship, a wedding, births, deaths.

The living mourn the dead; the dead regard the living from beyond the grave with new wisdom. And the play's narrator, called the Stage Manager (and portrayed here by TV and film actor Tom Skerritt) describes the fictional Yankee burg simply as "a nice town, y'know what I mean? Nobody very remarkable ever came out of it."

Though its stagecraft seems conventional now, when the play debuted in 1938 it was experimental. Wilder ( who won Pulitzer Prizes for "Our Town," as well as his novel "The Bridge at San Luis Rey," and his later play, "The Skin of Our Teeth") fashioned the Stage Manager as a one-man Greek chorus, an unconventional device at the time. And his script specifies a nearly-bare set for the play, to underscore that "Our claim, our hope, our despair are in (our) minds — not in things, not in 'scenery.' "

What's been most prized in "Our Town," however, is its humanism and sense of universality, its attempt (as Wilder put it) "to find a value above all price for smaller events in our daily life."

The play has been welcomed in Poland, Germany, Russia, Japan, Korea and many other countries. Yet in its nation of origin, the notion of a quiet, leisurely study of a New England Everytown may sound old hat and WASP-centric. Is a wistful and symbolic stage poem too far out of step with today's fast-paced, fractured and literal-minded America?

Rebelling against a canon

Once upon a time, American culture wasn't nearly as subdivided as it is today. In the 19th century, Shakespeare's plays spoke to an enthusiastic, nationwide audience of working stiffs, as well as socialites.

In the early 20th century, as electronic media began to replace live performance and reading as favored mass entertainment, a slew of radio dramas and Hollywood movie hits still drew big, heterogeneous audiences. So did a few dramas (e.g. "Our Town") and 1940s and '50s musicals from Broadway's so-called Golden Age.

More Americans also began to celebrate their ancestral roots and rebel against a literary canon emphasizing the works of "dead white men" — a welcomed trend, but one that created even more cultural "niche markets."

An inner-city "Our Town"?

Given these shifts, how could a sex-free, nonviolent three-act drama about a New England village in bygone times hit us where we live today?

A fascinating affirmation emerges in "O.T.: Our Town," a 2003 film (now on DVD). Scott Hamilton Kennedy's documentary follows two committed teachers, one white and the other black, as they struggle to produce "Our Town" in a dispirited Compton, Calif., high school. It just happens to be located in the same tough, low-income neighborhood where the movie "Boyz in the Hood" was set.

Compton's Dominguez High School hadn't mounted a school play in 20 years. And the student actors in the show at first felt alienated from Wilder's vision of America life. It seemed antiquated, and antithetical to their own urban experiences of poverty, racial tension and family turmoil.

Yet slowly the youths begin to see their own concerns and aspirations reflected in the characters they portrayed, and in the profound rites of passage depicted in the play. One student actor grappled with his own demons, while learning the role of a man who ultimately commits suicide. The teenage girl playing the Stage Manager, neglected and abandoned as a small child by her own parents, summoned the confidence to dream bigger about her future.

The film captures how, by the opening night performance on a makeshift cafeteria stage, the novice black and Latino thespians of "O.T." had forged a close-knit community of their own. And their time dwelling in "Our Town" became a milestone — a point of pride not just for the actors, but also for their peers, parents and their own town of Compton.

Intiman's "Our Town" has a multicultural ensemble too, of white, black, Latino and Asian American actors. But Sher isn't "updating" the text. He intends to present it "simply and gracefully," banking on the idea that the play's universal elements are so fundamental to every town, everywhere that they can never be outdated.

"Our show takes place in the early 1900s, and people speak with New England accents, as Wilder intended," he says.

"But ideally, the audience and actors will have the experience of all of us being together in the same story. I think there's still comfort in the illusion, no matter how brief, of an inclusive community where there's room for everyone."

Though he hasn't bitten off a major stage role in 30 years, Skerritt is glad to tackle one in "Our Town."

Certainly, the ruggedly attractive, Seattle-based star of TV's "Picket Fences" and such films as "Contact" and "A River Runs Through It" radiates the folksy decency long associated with the Stage Manager — a plum role filled in the past by Henry Fonda, Hal Holbrook and, recently on Broadway by Paul Newman.

"I'm at a stage in life where I don't have to do anything just to pay the bills," says Skerritt, still hardy at age 71. "I'm doing this because it's a classic play, a wonderful part, and it's home."

Skerritt echoes Sher's belief that "Our Town" can be a unifying force, a reminder of what Cornel West (in his new book, "Democracy Matters") terms "the deep democratic traditions" which have sustained this nation in other divisive periods.

" 'Our Town' speaks to something everyone can fully appreciate," Skerritt suggests. "It asks, Do you really see the world around you every day? Do you appreciate that you live and breathe? Hopefully, we all can relate to that. If not, I don't know why."

Playing the Stage Manager in "Our Town" will be Tom Skerritt's first major stage role in several decades. The star of such films as "Contact" and "The Turning Point" says he appreciates tackling a "wonderful part" in classic American drama. (KEN LAMBERT / THE SEATTLE TIMES) 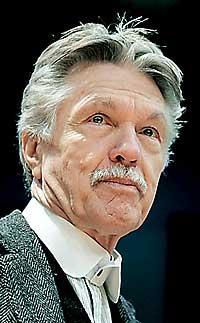 Tom Skerritt plays the Stage Manager in a dress rehearsal for Intiman Theatre's production of "Our Town."