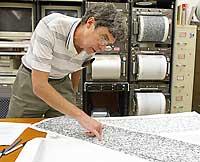 University of Washington seismographs show almost continuous swarms of earthquakes shaking Mount St. Helens yesterday. Steve Malone, a research professor in Earth and space sciences, studies the readings. At the upper right, almost black, is the current graph for Mount St. Helens; below it, showing no activity, is the one for Mount Rainier. (HARLEY SOLTES / THE SEATTLE TIMES)
By Sandi Doughton
Seattle Times staff reporter
Federal scientists raised the volcano warning at Mount St. Helens to the equivalent of an orange alert this morning, as earthquake intensity increased and preliminary measurements showed magma may be moving into the crater.

Volcanic explosions could occur at any time, and an eruption that spews rock and ash up to three miles from the crater is possible, said Cynthia Gardner, of the U.S. Geological Survey's Cascades Volcano Observatory. A larger eruption is also possible, but not likely, scientists said.

Because the area around the volcano is uninhabited, the risk to human life and property is low, said USGS geologist Dan Miller.

"I can't imagine a small to moderate eruption having an impact on people or property," Miller said at a briefing this morning.

It's also possible the volcanic activity will die out, Gardner added.

"At this point, we're saying there's a heightened possibility of an eruption," she said. "We're not guaranteeing you an eruption."

Overnight, the pace of earthquakes beneath the volcano more than doubled, to about four a minute, said USGS seismologist Seth Moran. The size of the shaking also intensified, with several quakes registering at magnitude 2 to 2.5 - strong enough to be felt by somebody who was standing in the crater. Previously, most of the earthquakes ranged from magnitude 1 to 1.5.

A monitor installed Monday on the small dome inside the volcano's crater also detected about two inches of upward bulging over the past 12 hours.

That means magma is almost certainly moving into the dome, making an eruption more likely.

Seismograph printouts at the University of Washington show how much things have changed at Mount St. Helens in the space of a few days.

Early last week, the pages were blank, except for an occasional, tiny blip. Yesterday, they were almost solid black, each dark scrawl representing another small earthquake from beneath the volcano.

"It's continuous," said UW seismologist Steve Malone. "We know there's a lot of rock breaking, and sooner or later something's got to give."

When it does, the result could be small explosions or eruptions, possibly accompanied by an outpouring of lava onto the 925-foot dome that has built up in the crater since the volcano's massive eruption in 1980, scientists say.

But the fact that volcanic gases are not escaping from the mountain in high levels means that fresh magma has not been welling up from deep underground, said Willie Scott, a volcanologist at the volcano observatory. And in the absence of new magma, any eruption will not be major.

"That makes us think we're not in a situation where, imminently, we could have a large, sustained, explosive eruption," Scott said.

Field crews spent the day yesterday placing instruments around the volcano to measure any bulging that would be expected if magma does begin to move upward. Some of the instruments will deliver continuous, real-time data from fixed stations, while others will be moved around from place to place, to collect information over as many points as possible, Scott said.

As recently as last month, instruments already deployed around the volcano showed no evidence of any bulging, Scott said. In the two months before the May 18, 1980, eruption, the mountain's northern flank bulged outward more than 200 feet.

Convinced the volcano was already going off yesterday, many people around the region called the volcano observatory to report what they thought were eruption plumes. What they really saw were wisps of clouds or dust from rockfalls in the crater, Scott said.

State and regional emergency planners participated in a conference call with scientists yesterday to get an update on the volcano's status and review the emergency-response plan written after the 1980 eruption killed 57 people, destroyed 200 homes and unleashed the biggest landslide in recorded history.

Although the plan has been updated in recent years, some of those on the conference call couldn't remember where their copies were, Malone said.

"It's been awhile," he laughed.

Scientists say any hazards from a small explosion, eruption or mudflow would be confined to the mountain's unpopulated flanks.

However, it's likely the mountain also will throw up an ash plume, which could kill the engines of any aircraft flying in the area, Scott said. If a plume occurs, the volcano observatory would notify the National Oceanic and Atmospheric Administration and the Federal Aviation Administration, which would reroute air traffic away from the drifting plume.

Mount St. Helens has rumbled several times since 1980, with thick, pasty magma pouring out and creating the lava dome that now sits inside the lopsided crater. The last lava outpouring was in 1986. 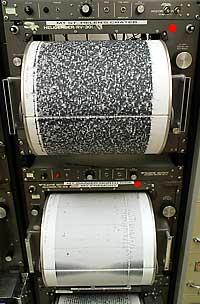 In the top graph, University of Washington seismographs show swarms of earthquakes shaking Mount St. Helens. The chart below it graphs the quieter readings from Mt. Rainier. (HARLEY SOLTES / THE SEATTLE TIMES)